Denver’s Mayor and His Cabinet Come to Community

Last Saturday Denver Mayor Michael Hancock held his third and final 2012 Cabinet in the Community event at the Montclair Recreation Center in East Denver.  It featured presentations about the 2013 city budget by Chief Financial Officer Cary Kennedy, an update about the city’s economic plan by Economic Development Director Paul Washington, and a talk about the city’s health initiative by Environmental Health Director Doug Linkhart.  It also promised an eruption of organized opposition to the proposed Walmart store at 9th and Colorado, an unfolding urban infill drama that we’ve been following on this blog (more on that below).

Mayor Hancock, at Podium and with Cabinet, Addressing the Community Assembly (D. Saitta)

This was a very nice meeting—generously provisioned, well-organized, informative, and efficiently run. It addressed several of the concerns of this blog.  “Aerotropolis” was one of them.  Mr. Washington mentioned that we’ve “only scratched the surface” of the economic potential of Denver International Airport (DIA), the 5th busiest in the nation and 10th busiest in the world. The city is actively looking for development opportunities to maximize this potential.  Mr. Washington described the proposed DIA aerotropolis as “the most profound economic opportunity that we will see in a lifetime.”  It also could have long-term unintended consequences that might be worth contemplating.

Mr. Linkhart addressed the relationship between built environment and health.  Denver routinely ranks as one of the nation’s fittest cities. It also ranks 6th in the country in terms of the number of people who bicycle to work, a ranking that has been helped by the success of the Denver B-cycle program.  However, one-half of the city’s adults and one-third of its children are overweight or at risk thereof.  In other words, Denver is getting fat along with the rest of the country.  Mr. Linkhart noted that Seattle does twice as well as Denver in numbers of people who bicycle to work, and Germany as a nation (with Berlin presumably leading the way) does five times as well. Mr. Linkhart is interested in hearing from citizens about what we can do with the built environment to help improve Denver’s numbers.  He mentioned creating more bike lanes.  Another thing that could be done is to build more pedways and bikeways over dangerous streets, like we’ve suggested here as a way to improve urban connectivity for the development project at 9th and Colorado.  But facilitating bicycle travel is one thing; equitably distributing the resources that encourage bicycle use is another.  In an interesting coincidence, last Sunday’s Denver Post reported on some issues around the locating of Denver B-Cycle bike stations in the city.  They’re almost exclusively in white, middle-income areas.  The story also identified some of the cultural factors that affect a minority community’s willingness to participate in the program.  The piece raises the interesting question of what other incentives can be used to promote biking (and walking) by Denver residents if simply making bikes available makes no difference in some neighborhoods.

This Cabinet in the Community event was also billed as one where opponents of the proposed Walmart store at 9th and Colorado could exert additional pressure to block public financing for this controversial project.  We’ve dubbed the opponents Redshirts.  They’ve been called “Walmartyrs” by Westword’s Patricia Calhoun, although I’m not sure what these folks are risking by opting for obstructionism over constructive engagement. I’ll assume that Ms. Calhoun is defining martyr as “someone who displays or exaggerates their discomfort or distress in order to obtain sympathy or admiration [New Oxford American Dictionary].”  On the other hand, the folks working at Heidi’s Deli across the street from the development site risk losing some business for their pro-Walmart opinions (see the 9News story here) given some of the comments posted to the anti-Walmart Facebook page Do It Right at 9th.  Tellingly, deli-seekers in the area are urged by Do It Righters to patronize Marczyk’s Fine Foods instead.  Nope, no elitism and hypocrisy to be found anywhere in this debate…

Mayor Hancock saw this kind of outrage (and, perhaps, pettiness) coming and fired a preemptive strike in his welcoming remarks.  He noted that 9th and Colorado is critical to the economic development of the city.  He said that he’s heard the community (or, alternatively, perhaps just a segment of the community?) “loud and clear.”  He said he wants a development that’s wanted by the neighbors and in which everyone can take pride.  He reminded the group that city government takes no position on retailers and doesn’t look to favor one over another.  He noted that Walmarts are being planned all over the city. Some neighborhoods want one, others don’t. 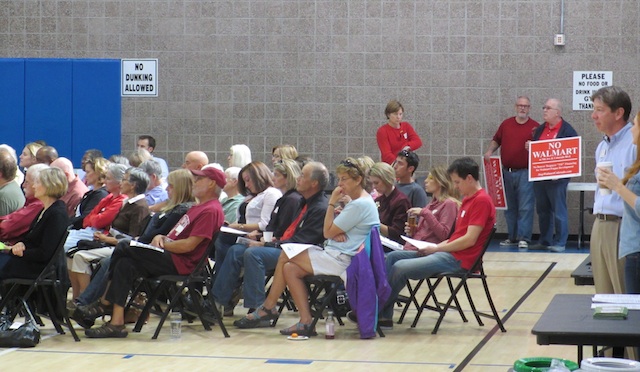 Redshirted Anti-Walmarteers at Cabinet in the Community (D. Saitta)

The mayor also sought to dispel two myths that have been circulating about the 9th and Colorado project. One is the widespread myth that public financing for the project goes directly to Walmart.  It doesn’t. However, to the extent that the myth exploits citizen ignorance about how “tax increment financing” (TIF) works it has proven tactically useful for redshirted anti-Walmarteers to perpetuate it.  The other myth is that Mayor Hancock has been counting City Council votes in an effort to move the project forward. He hasn’t (or so he says).  However, it’s clear that council vote-counting has been taking place.  As reported last week in the Denver Post, City Councilwomen Susman and Robb admitted speaking to other council members and determined that “there probably were not enough votes for TIF to pass.”  There can be  little doubt that such vote-counting by the councilwomen was prompted by the very vocal outrage of the Redshirts.

Vote-counting is politics as usual, and that’s fine.  The point here—as well as here and here—is that instead of counting (or not) City Council votes our civic leaders should have been promoting better discussions of the many issues that converge at re-development sites like 9thand Colorado.  One commentator in Westword frames just a few of the other issues in a particularly pithy way:

Or, how about being upset that there’s no plan to preserve additional historical structures or architectural features that would enrich the re-developed site’s identity as a distinctive place?  Public meeting attendees and social media contributors have raised some of these issues, but they’ve been overwhelmed by the single-minded focus on Walmart. Opportunities to discuss these issues have always been there, at least at the public meetings that I’ve attended.  When things get back on track discussion of these issues, and others, should be comprehensive, sensitive to urban context, and data-driven rather than ideology-based.  The discussions should be framed by the essential question of What does a politically, economically, and culturally-inclusive city look like?  This question should be front-and-center whether we’re talking about the quality of transportation infrastructure, the character of “mixed use” development, the nature of historic preservation, or any other variable that affects the livability of an urban place and the willingness of citizens to identify with it.