The Ancient Roots of New Urbanism

One purpose of this blog is to promote urban anthropology—the cross-cultural and deep time study of variation in ways of being and building—as a source of principles and practices for guiding contemporary urban planning and design. By “deep time” I mean the 6,000-year history of city building that stretches beyond classical Athens and Rome back to ancient Mesopotamia and other original crucibles of urban life. It includes urban histories that have been largely ignored by Western scholars, for example, the histories of indigenous Africa and the Americas. This deep history can only be known through archaeological inquiry, because its written texts either don’t exist or haven’t yet been translated.

The ancient Mayan civilization of lowland Mexico and Central America is a particularly rich area of archaeological study. Scholars are discovering lots of variation in the physical composition of Mayan cities. This physical variation implies variation in political governance and ways of living. Even well-known Maya cities that have long been tourist destinations are yielding new insights. For example, archaeological work at the great capital of Tikal in Guatemala is showing how its elevated central precinct and well-plastered pyramids channeled water to central reservoirs and served the cause of agricultural sustainability. Outside the Maya heartland, research on the singularly impressive and influential metropolis of Teotihuacan in the Valley of Mexico has produced an unexpected finding that political governance of this highly-ordered and complex polity was more collective than autocratic. 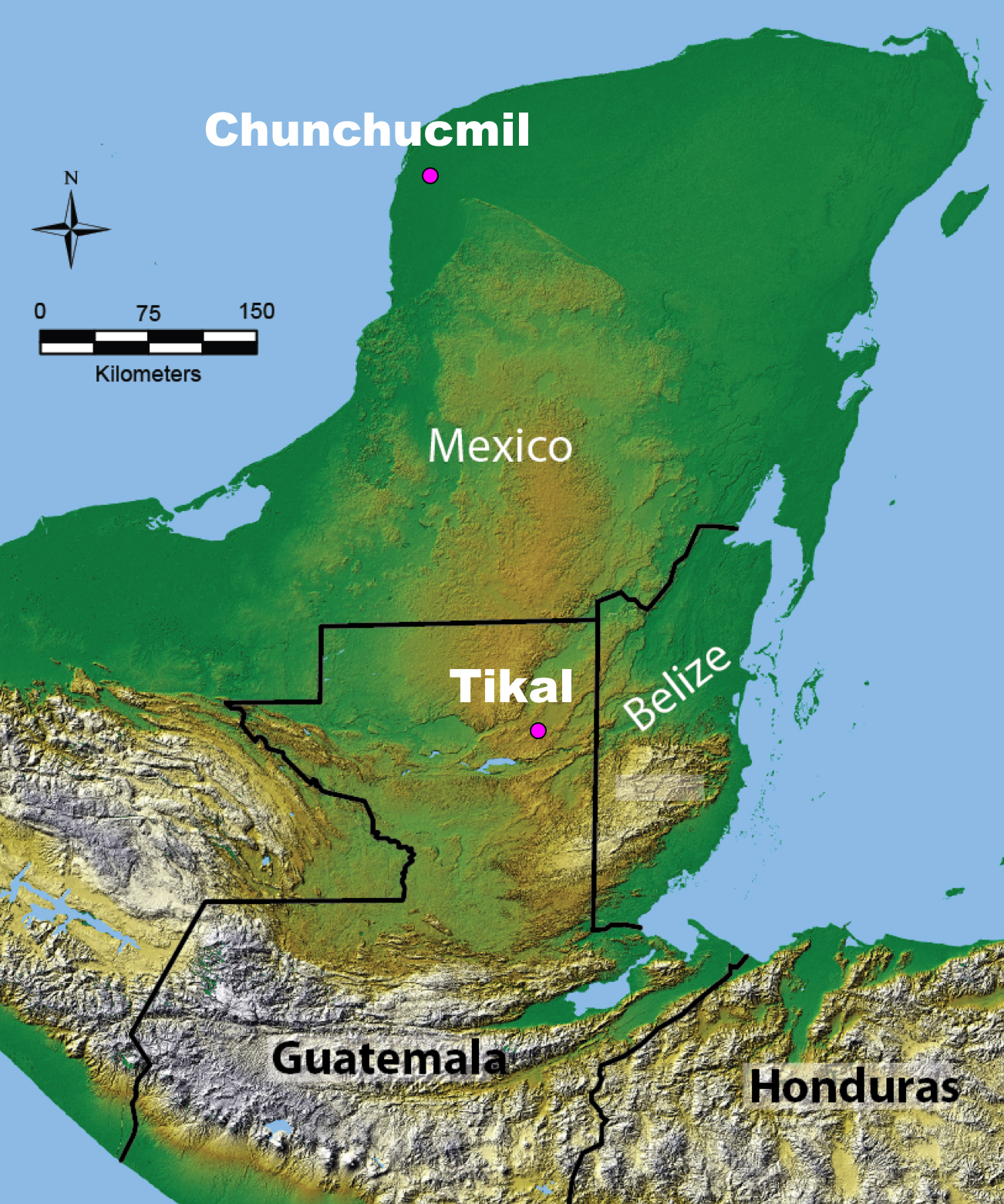 Less well known to popular audiences is the ancient city of Chunchucmil, in Northwest Yucatan. Archaeological research at Chunchucmil started under Bruce Dahlin in the 1990s. Dahlin was later joined as co-director of the research by Traci Ardren. Chunchucmil dates to the middle of the Classic period in Maya history, AD 400-600. Its urban area covers 20-25 square kilometers. Some 10,000 structures were built there, grouped into over 1,400 house compounds bounded by stone walls or albarradas. The size of the population is estimated between 30,000 and 45,000 people. The population density of 3000 people per square kilometer in the city’s six-square-kilometer center (Figure 2) approaches the density of modern cities. 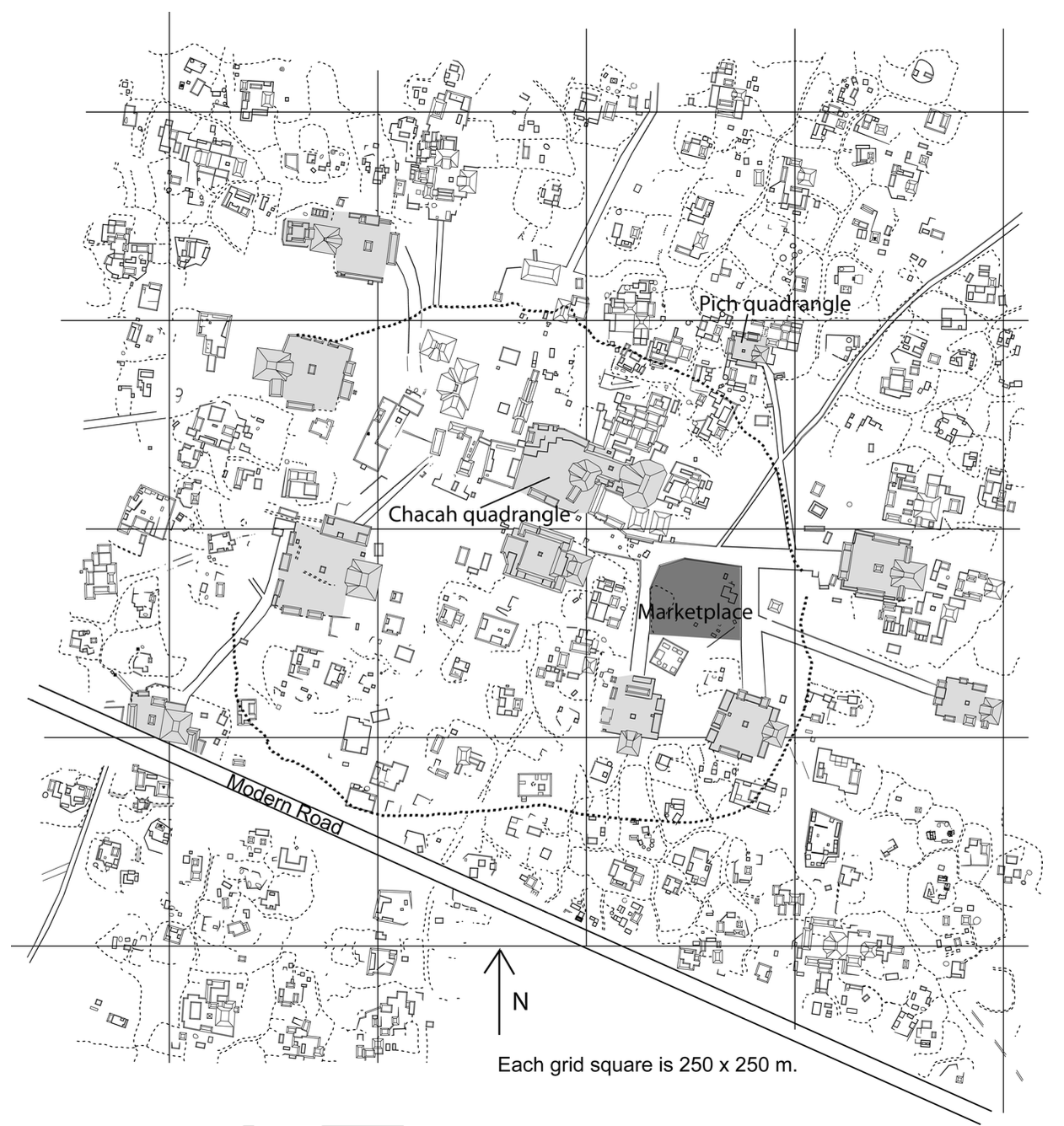 Chunchucmil was not a typical Mayan city in terms of monumental architecture. Unlike other large Mayan cities, it lacks a single civic-ceremonial core defined by a huge temple-plaza complex. It also lacks free-standing carved monuments that glorify individual rulers. Instead, Chunchucmil contains over a dozen monumental compounds or quadrangles having modestly sized “patios” and temples only 6-18 meters high. These quadrangles served as civic-ceremonial focal points for several distinct residential neighborhoods. The city’s public spaces also look very “secular”; i.e., they’re not designed for worship by large groups of citizens and pilgrims. Indeed, the largest public space in the city seems to have served as a marketplace (Figure 3), with smaller open spaces perhaps given to the same function. Thus, Chunchucmil is not a “regal-ritual” city in the classic Maya sense. Chunchucmil is also puzzling because of its location in an area of marginal agricultural productivity. Soils are poor, rainfall is scarce, and yields are low. The contradiction between agricultural marginality and high population density, plus the city’s secularized character, alerts us to a different reason for its existence: as a trading center in desirable products such as obsidian (a volcanic glass) and salt. Various services related to commercial activity were also likely on offer, in the areas of transportation, security, hospitality, and entertainment. 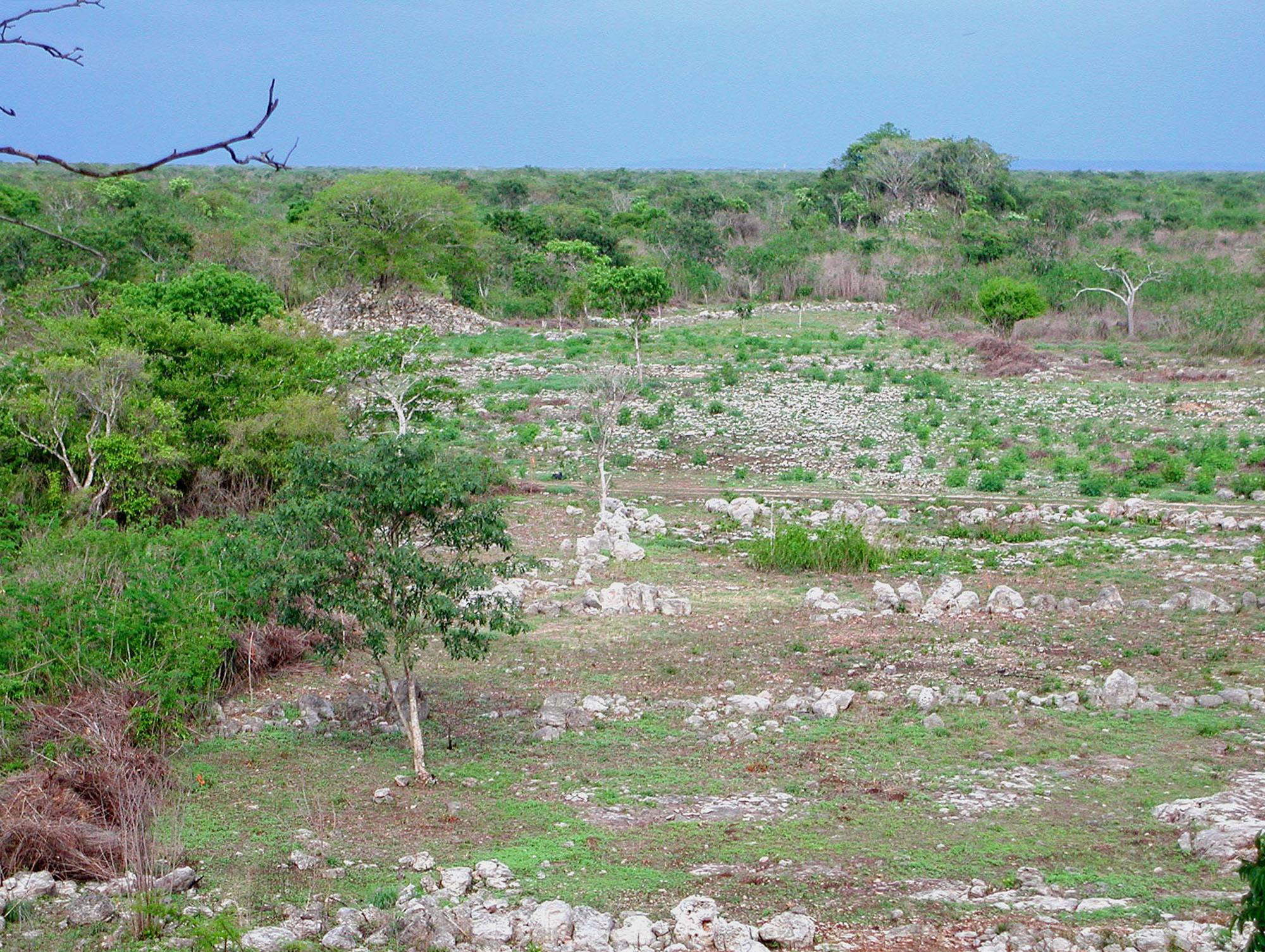 The fact that Chunchucmil is not a “typical” Mayan city interests archaeologists. It’s also a blessing for today’s urbanists. Chunchucmil’s density and commercialized economy enhances the relevance of whatever lessons the city teaches for contemporary urban planning and design. Recently, my colleague Scott Hutson, professor of anthropology at the University of Kentucky and a co-director of the research at Chunchucmil, has synthesized most of what we know about the city in his terrific book The Ancient Urban Maya: Neighborhoods, Inequality, and Built Form. Last academic term, I invited Scott to my university as a visiting scholar to help my Ancient City class plumb Maya urbanism’s structure, meaning, mysteries, and contemporary relevance. Scott workshopped archaeological methods with students in anthropology and geography and gave a public lecture entitled “Very Old Urbanism as New Urbanism: Mixing at an Ancient Maya City.” The lecture’s starting point was one of the central principles of New Urbanism: that cities should be socially diverse, with neighborhoods containing a mix of people of different incomes, ethnicities, and occupations. A corollary, drawn from the Charter of the New Urbanism, is that a city’s physical framework should actively encourage such social mixing. Achieving this goal has been easier said than done. Social science research as well as the recent history of urban planning suggest that social and economic mixing is difficult to achieve. Current commentators aren’t sure about what’s to be done, except to urge some rethinking of what we know about cities and neighborhoods. 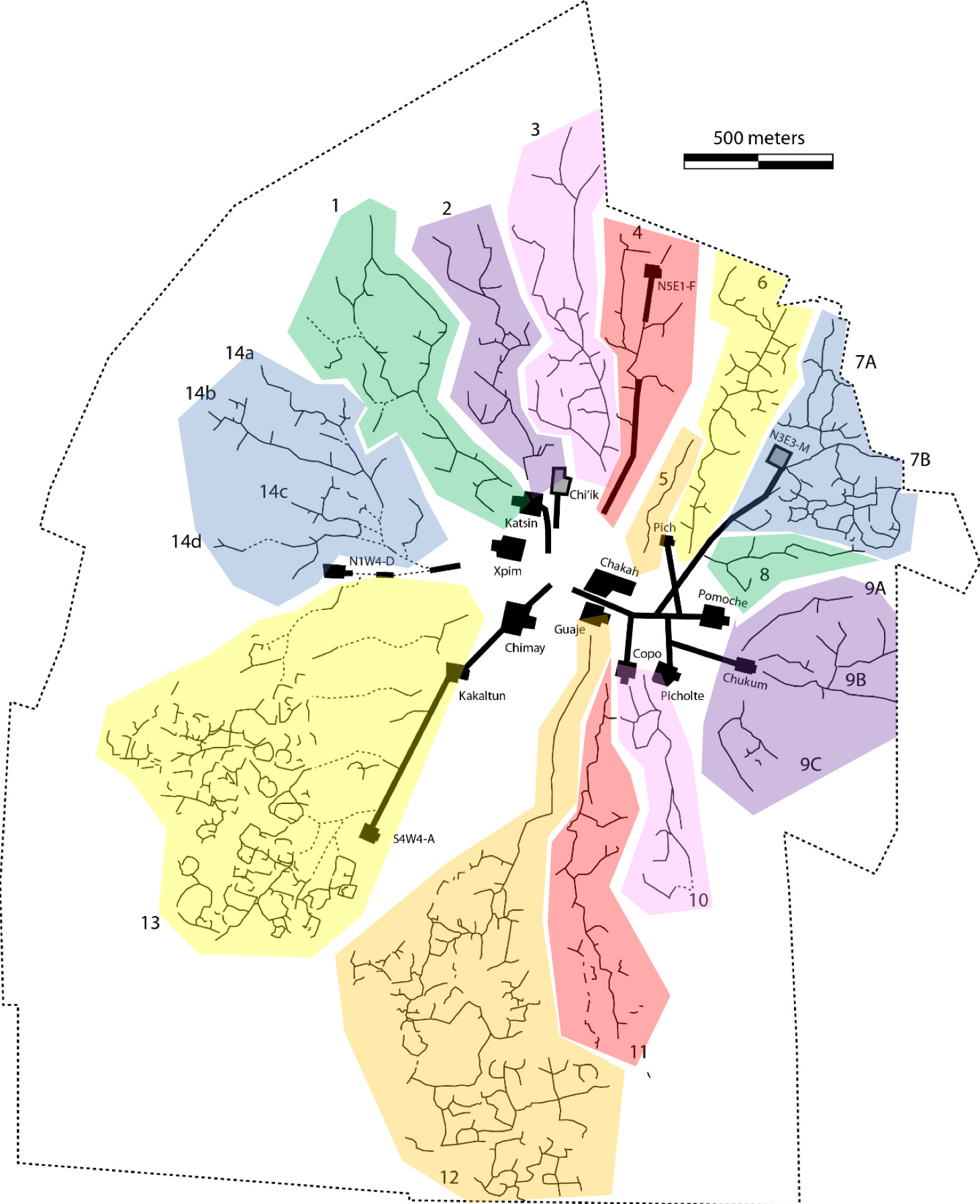 Dr. Hutson’s lecture considered whether social and economic mixing was achieved at Chunchucmil. He made a very persuasive case that it was. The city’s houses are organized into clearly defined neighborhoods, color-coded in Figure 4 (above) and detailed in Figure 5 (below). These neighborhoods are in turn arranged in a distinctive hub-and-spoke pattern radiating out from the central core. Raised processional avenues called sacbes connect monumental compounds to each other and, to some extent, to neighborhoods. The hub-and-spoke plan strongly encouraged regular and intense face-to-face interaction among neighborhood residents while simplifying access to civic-ceremonial compounds and the central marketplace. The public spaces (patios) at the monumental compounds were large enough to accommodate all of the residents of a particular neighborhood. The city’s physical framework accomplished this without impeding the freedom of residents to circulate more widely via other streets (callejuelas) and pathways. 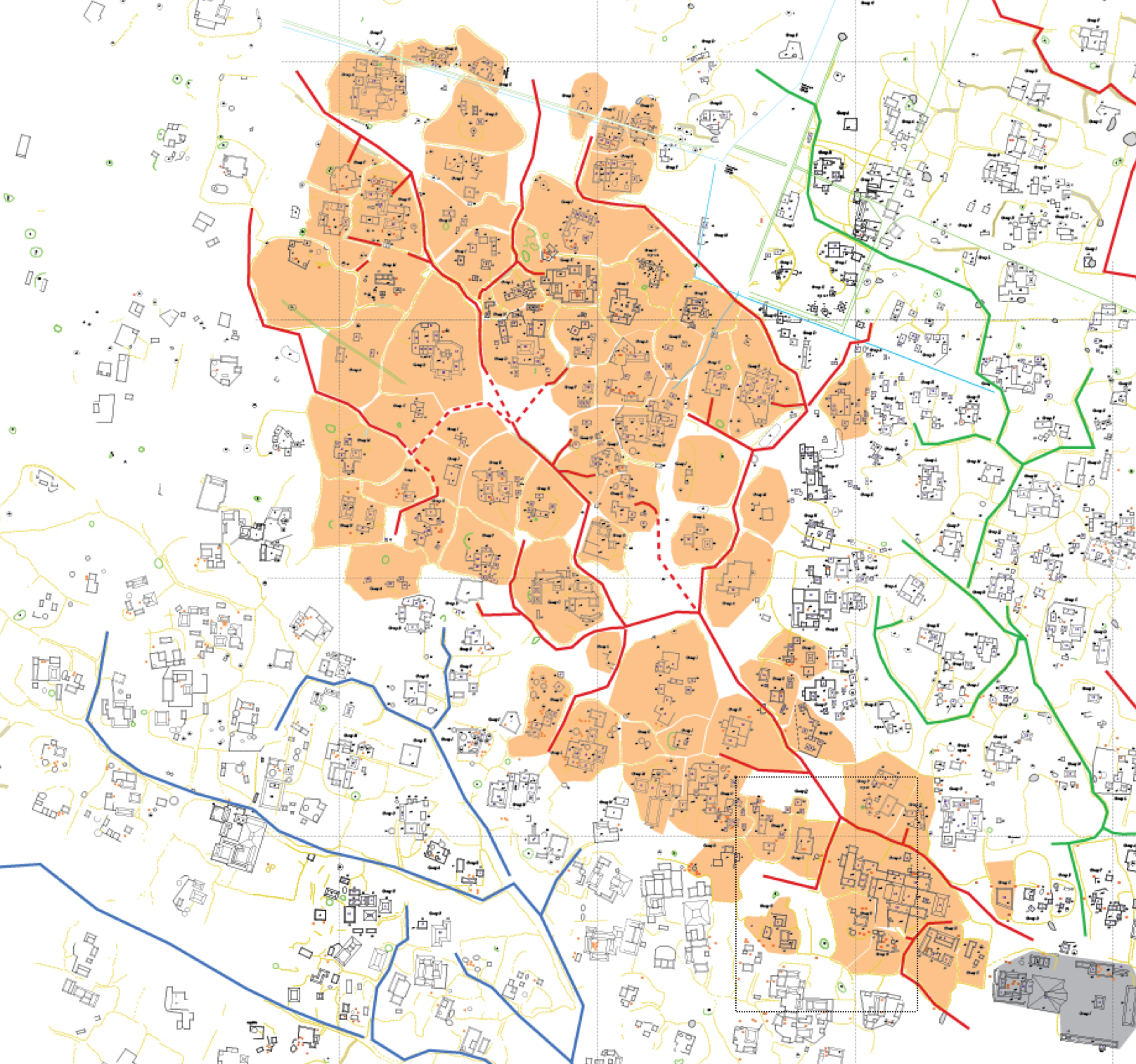 How do we know that these neighborhoods mixed residents of different incomes and, conceivably, other diversities? Hutson argues that economic mixing is evidenced by the unequal distribution of architecture and land (domestic yards or solares) within the city’s neighborhoods. Simply put, the greater the volume of architecture in a houselot, and the more solare space, the wealthier the household. As diagrammed in Figure 6 below, Neighborhood/Spoke #1 shows that richer and poorer households lived side-by-side at Chunchucmil. These households shared boundary walls and streets. Interestingly, they also shared roughly equal access to some very important commercial goods, such as obsidian. This commodity was widely distributed across houselots in every neighborhood at Chunchucmil. This suggests that regional commerce linked all of Chunchucmil’s households into more-or-less the same social network or, perhaps, what Hutson calls “cooperative associations.” 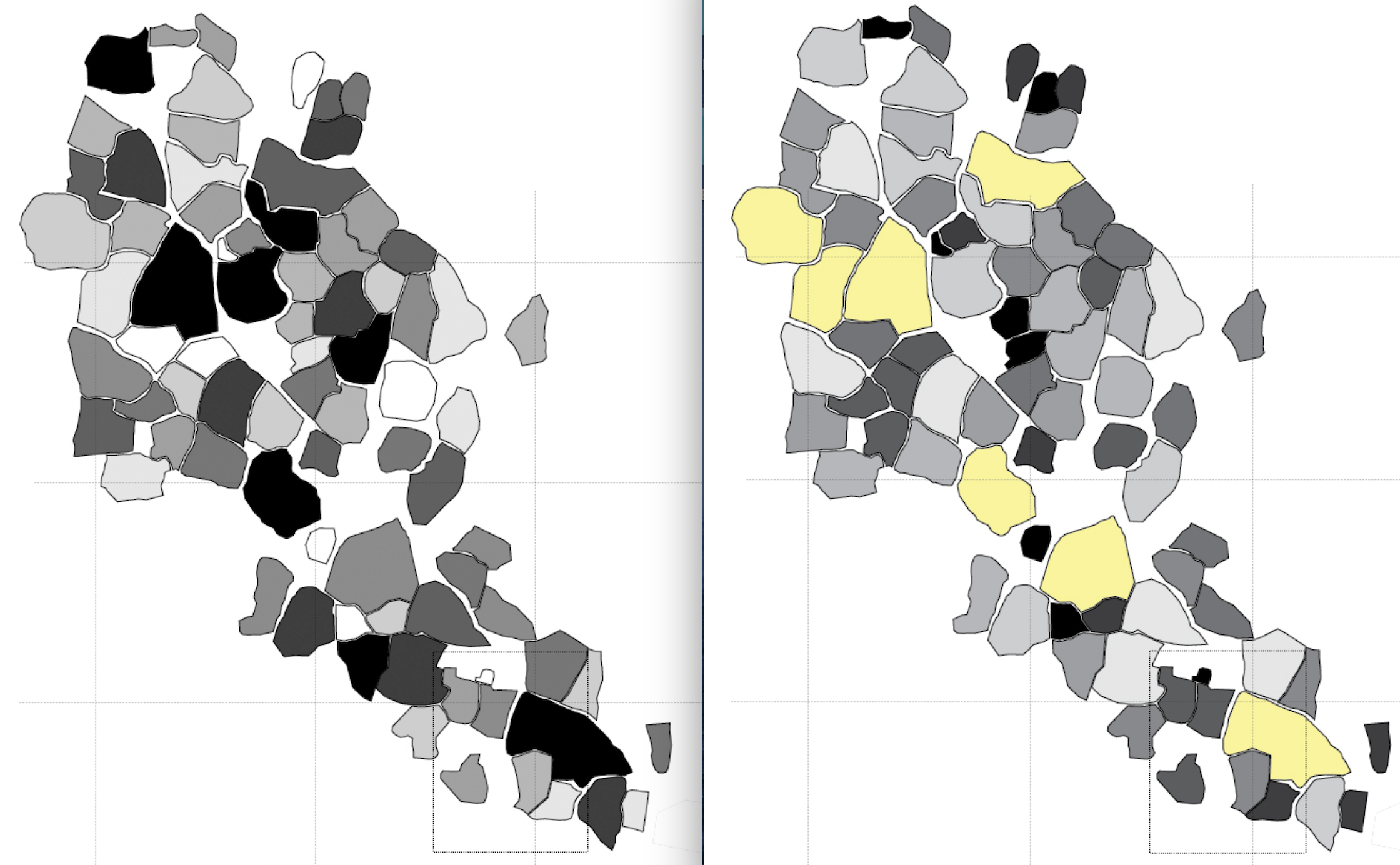 With respect to the question of urban inequality, it’s interesting to note that the Gini Coefficients (a statistical measure of income and wealth) calculated by Hutson for Chunchucmil average around 58. The average Gini for a number of other ancient Mayan cities is 53. These Gini values are in line with the values that have been generated for modern cities including those marked by strong residential segregation of people based on wealth. For example, Chicago’s Gini Coefficient hovers around 52, St. Louis’s around 50, and New York City’s around 54. Chunchucmil’s neighborhoods departed from the modern norm by mixing residents at different income levels. It’s also likely that the neighborhoods mixed occupations and perhaps even ethnicities. This inference is based on the absence of evidence at Chunchucmil that residents were spatially segregated along the other dimensions of human diversity accessible to archaeologists.

Thus, analysis of Chunchucmil in light of our contemporary urban condition suggests that the ancient Maya were effectively practicing and living by the tenets of “New” Urbanism 1,500 years before that term was invented by Western architects and planners. A check of New Urbanism’s Charter indicates that Chunchucmil successfully realized every one of its most important principles:

Of special significance is the fact that Chunchucmil appears to have avoided the residential segregation and displacement that normally accompanies the infusion of wealth into today’s cities. Chunchucmil’s long-term prosperity may, in fact, have depended upon equitable inclusion of its citizens into the urban and wider regional economy. An additional line of evidence for this is the extension of the practice of albarrada construction into the city’s residential periphery. Here, there was no particular need for residents to delineate houselots with stone walls. Yet they did it anyway—perhaps as a symbolic marker of shared identity with those living closer to the city center. Chunchucmil truly seems to have practiced an “urbanism for all.” But I don’t believe that Chunchucmil was exceptional in this regard. Based on my reading of the global archaeological literature it strikes me that a similar ethos governed other ancient cities in Asia, Africa, and the Americas.

Given the relatively compact, pedestrian-scaled and environmentally-constrained nature of ancient cities it’s not entirely unexpected that New Urbanist principles have a genealogy that’s deeply rooted in human history. So, how can today’s urban planning and design professions benefit from this knowledge? That’s the $64,000 question. It prompted some lively discussion after Dr. Hutson’s public lecture. Certainly, there are skeptics, especially among those outside of anthropology and archaeology who have limited knowledge of the ancient urban “Other.” My view is that there’s much to be gained as long as we recognize differences in spatial scale and political economy, and have modest expectations and goals. No single ancient city from anywhere in the world can offer a model that’s directly transferrable to today. Instead, we need to work comparatively [pdf] across multiple cases and geographies to distill additional principles and strategies that can guide contemporary practice.

We’re only beginning to do this deep historical and comparative work. It could be that radically new principles and strategies await discovery. If so, it’s not hard to imagine how today’s “tactical urbanists,” “incremental developers,” “urban acupuncturists,” and New Urbanists generally might directly benefit from knowing how the ancients planned, designed, and experienced their cities. Hidden in the shadows, but still close at hand, are much bigger and potentially more consequential lessons about alternative ways of thinking, and governing, the city. These bigger lessons will also be required if we’re to create cities that are more inclusive, equitable, and sustainable.

Acknowledgements: I’m grateful to Scott Hutson for permission to use his images in this essay. This essay draws on the original research of Scott and his colleagues Traci Ardren, Bruce Dahlin, David Hixson, Aline Magnoni, and others. This excellent work has clarified the physical and social nature of Chunchucmil, and is making significant contributions to a global comparative urbanism.