Last Sunday veteran city-watcher and freelance Denver Post columnist Susan Barnes-Gelt weighed in on what she (and I) have called the “brouhaha” at 9th and Colorado.  After detailing some site history Barnes-Gelt identifies three options for moving forward. One of these options broadly aligns with what we’ve been arguing here for many months:

Persuade the big box anchor to occupy a truly urban building. Walmart execs know their company’s growth depends on urban, mid-sized stores. Like it or not, today’s Walmart, Costco and Target are yesterday’s department stores. Leverage the anger that Walmart’s policies engender to achieve the right goals: a smaller footprint, better design and neighborhood-friendly hours.

It was with “leveraging” in mind (among other things) that I recently sent an email message to some of the principals in the eye of the storm inquiring about a couple issues of particular interest: (1) the number of below-poverty line residents of the adjacent 9th and Colorado neighborhoods, on the assumption that such knowledge would matter to the question of whether a Walmart is best located there, and (2) the latitude that exists for modifying the design plan to increase its appeal, on the assumption that a better plan might lessen resistance to a Walmart if the store’s location could be economically justified.

On August 14 I sent the following message to Marcus Pachner and Jeff Fuqua, as well as three City Councilors (Susman, Robb, and Kniech):

I’m an anthropologist at the University of Denver.  I’ve been blogging about 9th and Colorado site development for over a year at a website called Intercultural Urbanism. The full archive of 9th and Colorado posts is here:  http://www.interculturalurbanism.com/?cat=3.  It’s likely that I’ll be using this material in future academic and popular presentations and publications, probably in a context that considers the successes and failures of Denver’s “New Urbanism.”

With the 9th and Colorado debate heating up I’d appreciate your help in keeping me honest by answering 2 big questions about the project. One question is about local demography and the other is about the overall site design plan:

1. Available census data cross-checked against multiple sources suggest that the percentage of the population that falls below the poverty line in neighborhoods immediately adjacent to 9th and Colorado is around 10%, with a low of 5% in Hilltop and high of 15% in Hale (http://www.interculturalurbanism.com/?p=1409). And, that the percentage falling below the poverty line for a wider area that’s within striking distance of a 9th and Colorado Walmart is around 16% (specifically, the 80206 and 80220 zip codes).  Do these percentages square with your knowledge and experience? If so, are these data part of the argument that Walmart uses to suggest that there’s a “target demographic” for its goods in the 9th and Colorado area? If not, what’s the argument for why a store like Walmart would succeed here? I would ask Walmart’s Josh Phair, but I don’t have his email address.

2. In several blog posts I’ve suggested some design ideas for “place-making” that include preservation (in some form) of the existing 9th Avenue Research Bridge, installation of a pedway/bikeway overpass that better (and perhaps more safely) threads the development into Congress Park, full enclosure of the Nurses Dorm quadrangle with retail and gallery space, and construction of a “signature” building to house the large format retailer.  Details (and additional links) are here: http://www.interculturalurbanism.com/?p=1516.  None of these revisions would seem to be ruled out by the GDP nor the site-specific Urban Design Standards and Guidelines, although they would likely require some additional investments of capital (and perhaps nerve!).   Is that true?

I should note that I’m mostly interested in 9th and Colorado as an urban anthropologist. However, I do live nearby and thus have some stake in what this part of the city looks like and in how it functions.  Many thanks for any help you can give in answering the above two questions, or in directing me to people who can. Of course, I’d appreciate any other feedback you might have about my understanding of this interesting project, as reflected by what I’ve written on the blog.

So far none of the message recipients has chosen to reply [the message was forwarded to Walmart’s Joshua Phair on August 29]. I suspect they’re all very busy and have more important people to talk to. But it sure would be good to get some clarity on demographics. Comments on social media assert that social and economic diversity in many of the surrounding neighborhoods is significant…or not.  Conclusions about diversity seem to depend on the company one keeps and the extent to which one’s eyes are open to the urban underclass around them.  The fact of the matter seems to be that most commentators don’t really know how much of what kind of diversity actually exists in the area. 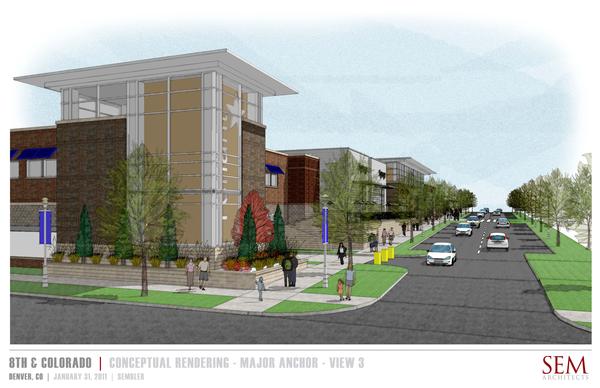 Conceptual Rendering of the Walmart Store at 9th and Colorado

Similarly, it would be good to get some clarity on the latitude that exists for design plan modification, if only to establish the kind of citizen leverage that can be exercised.  The vast majority of commentators (especially the anti-Walmarteers) pay no attention to design plan because if they’re not suffering from Vince Carroll’s Walmart Derangement Syndrome then they’re suffering from Single Issue Obsession Syndrome (a condition which afflicted Denver city councilwoman Robin Kniech this past week).  I’ve argued that neighbors should consider compromise if having a Walmart means that the other 87% of the project can be developed in a unique and sustainable way.  The focus should be on place-making writ large and all of the variables that affect the quality of urban space.  For example, there are citizens who say that the site plan isn’t dense enough and that there’s still too much allowance for surface parking.  For some the plan looks too much like “suburbia in the city” or at least too much like Belmar.  Such points are very well taken. But today there are interesting arguments from urbanists that even surface parking lots can serve as important civic space, especially if they support the operation of various “informal” urban economies. Such informal economies not only help urban underclasses make ends meet but they also make city life more interesting for the rest of us. For their part, the developer and Walmart are compromising on Big Box size and stock.  Today’s Denver Post reports that they’re also compromising on Big Box appearance. However, by now we’ve seen the conceptual rendering (above) many times and not only has it never inspired much love, it’s striking for its placeless-ness.  There should be other, more exciting possibilities.  The site design plan is not entirely lacking in appealing elements but room could be created for more. 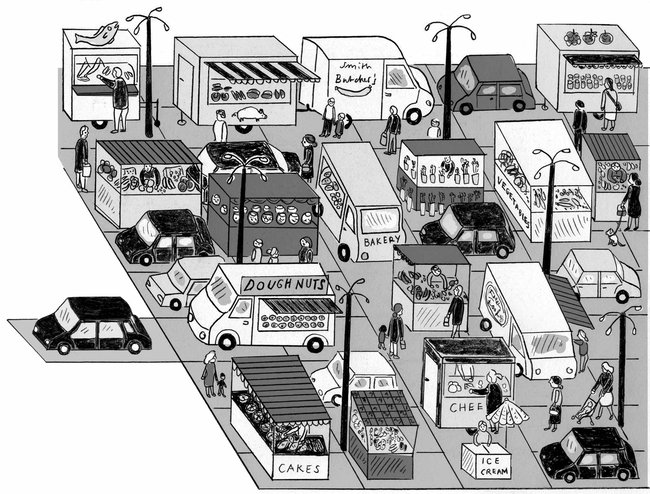 Specific neighborhood associations are now meeting to garner additional citizen input.  Hilltop met just the other day and plans to conduct a more formal survey of neighbors. Hale meets next week for a Q&A with developer and Walmart representatives.  Congress Park met last week and actually voted to establish an official position. Of the 160 Congress Park votes 89% oppose Walmart’s inclusion in the project.  But such exercises may not give us an accurate sense of neighborhood sentiment that, in an ideal world of democratic inclusiveness, we’d like to have.  The Congress Park vote represents about 1.8% of the adult population of the neighborhood.  Neighbors have vigorously insisted that “one-percenters” aren’t calling the shots in opposing Walmart, but in this particular sense that’s what it looks like.  An earlier email survey of Congress Park residents yielded opinion from about 2.8% of neighborhood adults.  The email survey result is pretty much the same as the meeting vote: at least 75% of polled adults oppose Walmart as we typically know it. But there’s a bit of a discrepancy between the two polls in terms of the percentage of neighbors who could approve a modified Walmart presence.  In the meeting vote 87% oppose a Walmart even if there were “limitation of size, hours of operation, etc.”   In the email survey the opposition to Walmart “if it were a more upscale or urban store”—which implies limitations on size and product—was only 45%.

Such mixed messages from Congress Park suggest that there’s still some significant uncertainty about who wants what at 9th and Colorado.  They also provide an opening to explore design and development options.  In so doing we might want to heed urban place-making pioneer Enrique Peñalosa‘s suggestion that urban planning should start with children and not adults. For Peñalosa kids are an “indicator species” for evaluating the livability of a city.  As first noted here, children have been completely left out of the conversation at 9th and Colorado, except where adults worry about the consequences of increased traffic in the neighborhoods.  I suspect that kids living in the neighborhoods have some of their own priorities for site development.  I’m guessing that walk- and bike-ability, activity variety, and retail affordability would be very high on their lists. I suspect that convenient access to affordable retail would also be high on the priorities list of the demographic group at the other end of the age-grade spectrum, senior-citizens.

Barnes-Gelt offers this as the parting shot to her Post piece:

Neither Walmart nor Fuqua nor the tired and increasingly irrelevant Colorado health care district leadership are the issue. The problem is an obsolete plan and an administration lacking expertise and resolve.

I have to agree, even though the current plan might not be as obsolete as Barnes-Gelt suggests.  We certainly need more attention to the overall plan. And we need greater involvement from people both within and beyond city administration who have the knowledge, expertise, and vision to facilitate a level-headed discussion about urban place-making in today’s world.