Just this morning I discovered a nice opinion piece in The Denver Business Journal  about the 9th and Colorado Walmart debate.  It’s by Brad Segal, president of Progressive Urban Management Associates in Denver. The piece is a breath of fresh air to the extent that it articulates a thoughtful and well-informed case in favor of Walmart’s presence at 9th and Colorado. Such opinions have been in very short supply in popular media accounts and in the online back-and-forth.

Mr. Segal confesses a deep aversion to Walmart for many of the same reasons that local neighbors find the retailer objectionable.   But he also calls out neighborhood “hypocrisy,” which he deems “unbearable.”  Mr. Segal notes the social class position of most local Congress Park and Hilltop households “within the 10% of higher incomes.”  So do we, while  also pointing out that more impoverished households can be found in the immediate area, especially within the Hale neighborhood. Class privilege produces much lamenting about Walmart but great rejoicing about Trader Joe’s.  It supports the patronizing of a Target store about one mile distant but mobilizes opposition to a “value shopping alternative” within walking distance.   Finally, Mr. Segal provides some reasons, based on the site’s urban context, why we shouldn’t fear a Walmart at 9th and Colorado for its potentially negative impact on small local businesses and property values. 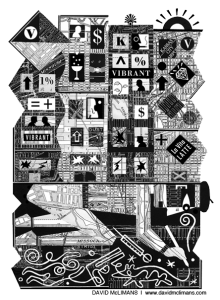 Like Mr. Segal, I’m repelled by much of what Walmart represents.  Like Mr. Segal, I’m struck by the hypocrisy and elitism of the more vocal objecting neighbors.  It’s really interesting how people who probably don’t give even a passing thought to rising capitalist exploitation and declining trade unionism during the day all of a sudden become ardent socialists and unionists (or, minimally, Wall Street Occupiers) when a Walmart is proposed for their neighborhood. But most importantly, like Mr. Segal I see a great opportunity here to leverage citizen concerns to make this area a much better place than even the developer and city planners might imagine.  The debate about 9th and Colorado seems to have lost sight of both context and circumstance.  It’s at risk of being hijacked by the more strident partisans on both sides, especially those in the anti-Walmart camp who justify their development ambitions by invoking a deep concern for neighborhood “vibrancy.”  As Thomas Frank points out in this nice essay, the concept of “vibrant” can be deeply problematic and serve as a codeword for a particular kind of urban exclusivity.  Alternatively, the tactical focus at 9th and Colorado should be on context-sensitive, inclusive place-making and not on vibrancy schemes that can easily produce social and economic gating by other means.