Image Issues at 9th and Colorado

“The world’s largest retailer has an image problem.”

So begins the latest, front page Denver Post story about the Walmart brouhaha at 9th and Colorado. I’m afraid it’s not only Walmart that has an image problem if the quality and tone of the story’s quotes from local residents, reader comments on The Post website, and postings to both the pro– and anti–developer websites are any indication. These comments and the ideologies they reflect don’t put anyone into a particularly favorable light. 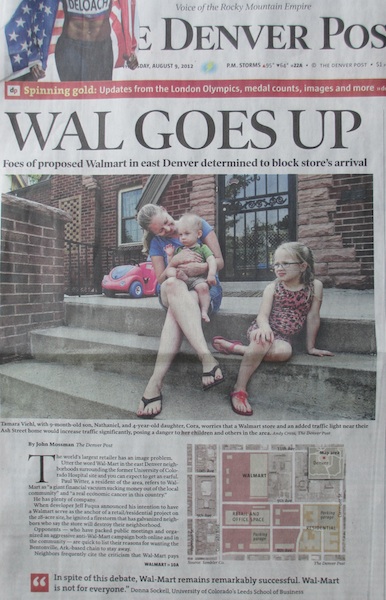 The Post’s reader comments contain the usual snarkiness that’s associated with people using their anonymity to bludgeon fellow citizens with rants and insults.  There’s some widespread misunderstanding of what it takes to physically develop a site like 9th and Colorado, including the importance of having an “anchor tenant” and public subsidies.  There are mis-impressions about the kind of big box retail store that’s being proposed. There are the usual criticisms of Walmart’s corporate behavior and its consequences.  At least a few of these criticisms are certainly the stuff of myth-making if anyone cares to fact-check.  There are unsubstantiated speculations about Fuqua Development’s motives and tactics.  Having attended monthly Colorado Boulevard Healthcare District Board meetings for about a year I’m willing to take Jeff Fuqua at his word that the competition for a big box retailer to fill the niche at 9th and Colorado was wide open, and that Walmart was the only company willing to work within the strict site development constraints.  Thus, I don’t see the “deceit and betrayal” that’s alleged in the Post story.  Interestingly, throughout the commentary on this and other stories about the site’s development there’s an astonishing collective obliviousness to the very real possibility that unless we start building more compact, walkable communities capable of offering goods and services to meet everyone’s needs and budget we all could be doomed.  Finally–and as noted elsewhere in this series of posts–there are many unsupported assertions about the kind of “community” that exists in the area.

It’s clear that the local neighbors who’ve spoken in opposition to Walmart  care deeply about their neighborhood as they perceive it. I say “perceive” because as I read the map 9th and Colorado sits at the nexus of multiple communities and neighborhoods.  The more outspoken neighbors envision an “upscale” development akin to Cherry Creek North.  However, it’s not clear that this particular vision is one that’s widely shared.  Thus, I’d think that neighbors would want to seriously explore all of the development options given the deepening urban blight and the experience of an unconsummated relationship with an earlier developer who proclaimed that “We are here for the long haul,” “We have never walked away from a project,” and that development of 9th and Colorado was “not contingent on financing.”  Under these circumstances some benefit of the doubt might be given to a company that’s attempting to do something different, at least in terms of opening new markets for itself.  Walmart might—just might—be keen to compromise on significant aspects of its plan (and perhaps even reflect upon and remedy its past bad behavior) if, as some informed observers suggest, it needs citizen buy-in to succeed in urban markets.  Walmart might also be uniquely positioned to use its deep pockets to help citizens achieve other place-making aims.

Thus, I think it might be time for the better informed local parties—CBHD Board Members, Neighborhood Association leaders, and especially Denver City Councilors—to begin framing the conversation in ways that can lead to more productive exchanges.  The parameters for such a conversation can be found in what I take to be some of the more thoughtful comments by citizens that have appeared on the social media sites dedicated to covering this issue.  The following comments are united by a grasp of some key facts about what’s being proposed, an appreciation for the uniqueness of the 9th and Colorado location, and a big picture view of development that focuses on city-building rather than neighborhood boundary maintenance:

From a local neighbor, posted to the stopwalmartcolorado.com website: August 2, 2012 at 8:53 am:

A canvasser came to our door last night. He CLEARLY stated that he represented the developer and he CLEARLY stated that the primary opposition was not to the development itself, but to Walmart specifically. He also stated that Walmart itself is not involved in the lobbying effort. While my original repulsion at the idea of a Walmart so close to my home wasn’t completely cured, I did appreciate the thoughtfulness of the overall design. This isn’t going to be a big red, white, and blue mega store like you see in the suburbs. All the parking will be underneath the store, the exterior design will be in keeping with the overall feel of the development… There are also concessions as to the actual content of the store itself….no gun sales, limited grocery, etc. So, the overall feel and look is something that I think would be fine. Of course, that doesn’t address the whole ‘do you want to support Walmart as a corporation’ question. I get that Walmart has its issues…However, I had to consider thoughtfully which corporations I would be okay with going in there. Target? They have a terrible record with regard to labor issues and gay rights, too. Chick-fil-A? We won’t even GO there. Will we protest a Chase bank outlet because of the sins of JP Morgan Chase traders? Or a Bank of America? Sunflower Market’s CEO was arrested in a child prostitution sting. Kmart/Sears has a reputation for keeping their employees scheduled for just few enough hours that they aren’t eligible for benefits. All I am suggesting is that we try to look at the entire picture and not just the myopic view on one particular store. I don’t know about anyone else, but I am sick to death of driving by the empty buildings and deteriorating landscape. I am ready to move forward, and if that means that I need to be open to ‘Walmart lite’ going in there, then I am willing to consider it. So, I know what I am against. And, I know what I am for…..if you are against Walmart, what WOULD you be in favor of?

I’ve lived in central Denver for over 15 years, though not in Congress Park. I know what this city is like, and what the history here is…I have no great love for Walmart, and I’m sure everyone would like to see the highest possible use of that parcel, now that the hospital is not there anymore… I don’t know if a project comprising small, locally-owned retailers could be successful there or not. The developer doesn’t think so, but maybe there are other developers who could make it work.  I’m almost on board with the opponents until I hear them talk about the “element” that Walmart would attract. Really? In 2012, we’re talking about the “element” that a store selling everyday household goods would attract? This is just offensive. Given the proximity of the location to the East Colfax corridor, where just about every socioeconomic group in Denver mingles, this concern seems especially out of place…I know that congestion on Colorado Blvd. is bad, but what do those of us who choose to live in older parts of Denver expect? A hospital was no good, and now they seem opposed not just to Walmart, but any high-traffic business, particularly one that might draw an “element.”  They seem to like a complex of abandoned buildings just fine, but I don’t think it’s good for the city.

From someone who doesn’t live in the city, posted to The Denver Post reader forum, August 9, 12:19 pm:

I don’t live in Denver, and haven’t been following this story until today. Are the people of the neighborhood against only the Walmart store, or are they against the entire project, and are using Walmart as their focus? What alternatives would the neighborhood like to see in this area that they and the developer could compromise on to make both sides happy?…With more stories coming out about why people don’t want a Walmart in their neighborhood, does Walmart hear these concerns and have any plans in the works for a truly upscale store that sells products not found in the Mom n’ Pop stores nearby, a store that will not compete directly with businesses already in the area of a planned store and would sell unique items that the folks in the neighborhood want and need?

Finally, there’s this broadside from another local neighbor–if not a member of the largely silent urban underclass that we’ve wondered about on this blog, then someone who perhaps speaks for it–published as a letter in this morning’s Denver Post:

The real issue here is not Walmart or no Walmart. Rather, it is a standoff between those demanding “upscale boutiques and gourmet restaurants” and those of us who want and need a revitalized neighborhood with affordable shopping and services. If the vocal activists succeed in forcing this third developer [the writer is counting the University of Colorado Health Sciences Center as the first potential developer, whose neighborhood expansion plans were foiled before Shea Properties joined the party] to walk away from the project, we will all be left with continuing blight and decay. That will be much more damaging to living conditions and property values than the proximity of a Walmart. There are many of us in favor of the proposed Walmart and the other businesses that will follow. You just don’t hear or see us because we are working and trying to make ends meet on fixed incomes and middle-class salaries. We cannot afford the luxury of attending meetings hijacked by elitist, whining, NIMBY neighbors. They say they speak for the rest of us, but they do not.

All of the surrounding neighbors and neighborhoods might benefit if a little less ideology informed the debate, and a little more pragmatism.

Update August 12: I don’t always agree with Denver Post columnist Vincent Carroll, but today he makes a really good point or two. And the reader reactions here and here are pretty typical.