For 15 months I’ve been following the debate about the 9th and Colorado development in Denver as a neutral observer. I’m interested in the process of urban development, and in the substance of the resulting design plans.  I’m persuaded by arguments from the urban planning literature that we need, in this increasingly complex Urban Age, better involvement of citizens in participatory design and negotiated development.  This is especially important where a developer doesn’t need citizen buy-in to build what he or she wants.  I also believe—as the name of this blog suggests—that there’s something to be learned about urban design and development as it occurs in other countries and cultures.  Finally, my collaboration with colleagues in DU’s Daniels College of Business persuades me that not all developers are evil, and that not all corporations are beyond redemption even if their business practices leave a whole lot to be desired.  If we really want to remedy what ails American corporate culture then we need to consider the system that produces bad behavior—the refreshing focus of the Occupy Movement—and do what we can to change the corporate culture from within.

Up until three months ago I thought the development discussion at 9th and Colorado was  going pretty well.  Several public meetings provided very useful exchanges among developers, city planners, and citizens that at least seemed to reflect an interest in participatory design (e.g., see here and here). But then Walmart was announced as the anchor tenant, and everything changed.  As City Councilwomen Mary Beth Susman and Jeanne Robb note in the newspaper story reporting their recent decision that they won’t support public financing for the project, “the rhetoric [has] gotten a little heavy.”   Heavy, and also heated.   Entire groups of people have been stereotyped.  False claims and anecdotes have been passed off as fact and recycled ad nauseum.  History has been ignored or revised.  Names have been called and characters assassinated.  Positions have grid-locked.  We’ve moved a long way from the promising start toward participatory design and negotiated development. 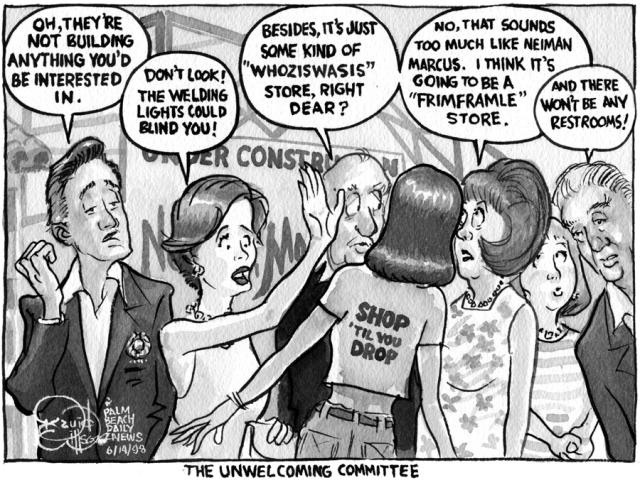 At this point both sides might reflect a bit on what they can do to get things back on track. A good start on the neighborhood’s side would be to re-evaluate its fundamental message.  This was recently summarized on the official anti-Walmart website stopwalmartcolorado.com in a post called “Our Message in a Nutshell”  [Note: “Our Message in a Nutshell” was apparently removed from the stopwalmartcolorado.com website after I posted “The Redshirt Manifesto”]. Stopwalmartcolorado.com is the site that’s organized citizen opposition to the project by distributing red yard signs proclaiming “No Walmart” and promoting the wearing of red shirts to public meetings.  It now has a companion Facebook page, Do It Right at 9th.  The Redshirt Manifesto contains the following three points:

1. We can do better  We have a rare opportunity to develop 28 acres of prime Denver real estate.  The developer wants you to believe that a suburban style shopping center is the only option in a world of possibilities, when nothing could be farther from the truth.  Let’s take the time to do this right and maintain the wonderful character of the neighborhood.  In the meantime, CU must be required to maintain the property in the meantime [sic].

2. Walmart is a bad [sic] for our local small businesses and a net job killer  There are studies that show that when WalMart moves into an area, it is detrimental to the local, small businesses.  Because they force nearby competition out of business, they actually kill 3 jobs for every 2 that they create.

3. Public financing requires public benefit and there is none to be found here  The developer of this project is seeking public financing for this project which requires that it be for the public good.  This project is actually just the opposite – not only do we exchange local, small businesses for a big box, but when a Walmart moves into an area property values go down, crime goes up and traffic dramatically increases.

I’d like to suggest that each of these claims is problematic and that the Manifesto as a whole may hurt the prospects for good place-making at 9th and Colorado more than it helps.  First, I don’t think it’s true that the developer wants us to believe that theirs is the only option.  The earlier Shea Properties option—although apparently more favorable to the local neighbors—didn’t succeed because a deal couldn’t be closed on financing. I suspect that the current developer selected his option, at least in part, because of that earlier failure.  That said, it seems to me that there’s room to synthesize elements of the two options while adding some new elements that we’ve described in multiple postings on this blog.  But synthesis is not helped by rejecting the Walmart piece out-of-hand.  What does “doing it right” mean if the first option was un-doable and the second one is undesirable?  An anchor tenant like Walmart—appropriately scaled for the urban space—could very easily catalyze development of an option that better meets everyone’s desires.

Second, I don’t think its true that Walmart “forces” competition out of business.  People have agency.  That agency doesn’t disappear when Walmart shows up.   If Walmart forces competitors out of business it’s because they make consumers a deal that they can’t refuse.  If consumers abandon the mom-and-pops they’ve been supporting just because a Walmart appears somewhere within striking distance that doesn’t say much about neighborhood loyalty to small, local business.  There are certainly “studies that show” this-and-that about Walmart’s effect on the retail landscape. But the thing about “studies” is that they can show almost anything.  Studies of the Walmart that appeared in 2006 on the west-side of Chicago—perhaps the best-analyzed case and the one that’s most relevant to development at 9th and Colorado—reached very different conclusions about the store’s effects. The Chicago case makes it clear that analytical methods affect research results and that causal chains are not always clear (for a Chicago city alderwoman’s on-the-ground evaluation of the west-side Walmart’s impacts, see here).   Certainly, Walmart finds itself at the center of many community controversies, which stopwalmartcolorado.com is compiling here.  But close reading of each of these stories suggests that there’s more to them than meets the eye. That is, they are complicated by local context and history and most are not strictly comparable to the situation at 9th and Colorado.

Third, I don’t think its true that there would be no public benefit if public financing was used to make way for a Walmart at 9th and Colorado.  Site remediation and site tenancy strike me as separate issues.  Public financing would remove an eyesore and a public health and safety hazard.  It would remediate the site for all future tenants, not just the big box retailer.  Sale of the property would allow the University of Colorado to restore over $700,000 that it currently spends to maintain a blighted campus to its central operating budget, money that I trust would be used to support the university’s educational mission. Seven hundred thousand dollars ain’t chump change given that Colorado is as bad as every other state in the union when it comes to providing public funding for higher education.  In fact, Colorado is worse than most.  According to the National Science Board and as reported in The Chronicle of Higher Education, per-student state support in Colorado over the last ten years has fallen by 48%, the greatest decline of any state in the nation.  In short, the public good can be served without the site’s neighbors liking all the specifics of the development plan.  As noted previously on this blog, I don’t detect anything in the exchanges that I’ve witnessed over the last 15 months to suggest that Walmart couldn’t help successfully develop 9th and Colorado provided that the company is serious about making firm and binding commitments to neighborhood and place.

Because of broad agreement across American political lines about the overall virtues of our particular economic system it’s been said that conservatives ignore the problems produced by bad corporate behavior and liberals only move them around.  The Redshirt Manifesto, and the citizen opposition that’s been expressed at recent public meetings, smacks of this kind of liberalism.  What we need are more examples of citizens working with the enemy to sensitively develop place while also changing corporate culture for the better.  That would be both radical and heroic.

Update December 15, 2012: Scott Doyon recently posted a piece called “Walmart and the Quest for a Better Mousetrap” in PlaceShakers and Newsmakers that makes a few points broadly similar to ones made here. Money Quote: “The system that fosters Walmart is not part of the natural order. It’s not an eternal and unchanging truth we must contend with.  We created it, and we can revise or even recreate it if we so choose.”