Who Won the Walmart War at 9th and Colorado?

As reported in The Denver Post and the The Denver Business Journal, Walmart has pulled out of the development at 9th and Colorado.  Neighbors have declared victory, as captured in this statement from the Anti-Walmarteers at Do It Right at 9th:

We couldn’t be more pleased. We are proud of the role played by concerned neighbors in communicating to City Council representatives that Wal-mart was not the right way to go at 9th and Colorado. It is a real victory for ‘the little guy’. Councilwomen Susman and Robb were so responsive and helpful – we are deeply grateful. Now we can get down to working with the developer, the City and CU on a plan that works for the surrounding neighborhoods and is truly beneficial for all of East Denver.

In my view what was lost here exceeds what was won.  Lost was an opportunity to seriously explore inclusive place-making with a motivated and willing-to-compromise retail giant in way that could set an example for other cities while also, perhaps, taming the tiger.  In a development and retail world currently filled with all sorts of risk and unpredictability, and given a site as challenging and as costly to remediate as 9th and Colorado, it might have been wise to at least consider what a national, “top quality” retail tenant—i.e., one that is financially-sound and credit-worthy—like Walmart might have contributed to the project of urban place-making.

At least a few cities provide some examples of how Denverites might have joined with Fuqua Development and Walmart in what I’ve called “participatory design and “negotiated development.” My fellow blogger and Walmart agnostic Richard Layman describes, in some detail, the case of Washington, DC at his excellent website Rebuilding Place in the Urban Space.  There, community activists and city officials applied pressure that led to a “Community Benefits Agreement” (CBA) with Walmart that, among other things, stipulated the following:

For Richard’s summary and analysis of the Washington DC case see here, and for the full report that he co-authored as part of a citizen review committee see here.  It’s important to note that it’s the process that’s important in the Washington DC case, not the specific product.  It’s also important to note that the Washington DC Community Benefits Agreement  is non-binding and “contingent upon business conditions.” This of course raises questions about Walmart’s sincerity, especially since the company isn’t getting a tax subsidy for development.  However, at this point in time there’s no indication that the company won’t make good on its promises.  Mike DeBonis summarizes the significance of the agreement:

All in all, this is not a deal that will quiet Wal-Mart’s most ardent foes. But it does represent on-paper promises from a major employer that is facing fairly minimal political and regulatory hurdles and has been famously reticent to make explicit community promises in the past.

It seems that if Denver had taken some time to explore this pathway we might have been in a very good position to make a binding agreement with Walmart given that Fuqua Development was going after tax subsidies for the project.  Walmart was already prepared to make binding agreements regarding the selling of exclusively 3.2 beer and the non-selling of guns and ammo. Here’s a list of some other things, inspired by DC’s citizen review document, that Denver might have negotiated:

Other ideas are here.  I’m not sure that there’s another retailer in the world as well-positioned as Walmart to modify its business model and deepen its commitment to community in a way that would create a win-win for both the company and the city.  But citizen animus toward Walmart carried the day at 9th and Colorado.  The company says it will explore other options in Denver. If it does, citizens in those communities might take note of  Richard Layman’s perceptive note about where Walmart animus can take you:

…[citizen animus] makes it very easy ….to create noise that ends up constraining “the discourse” on issues that people can address, such as whether or not the building is designed right, [whether] it’s part of a mixed use project, and [whether there’s] a mitigation program to deal with the negative impact of Walmart store entry on independent businesses and business districts.

Indeed, citizen animus about Walmart is likely as big a factor as any in explaining why its supercenters are such a horrible visual blight on the American landscape. 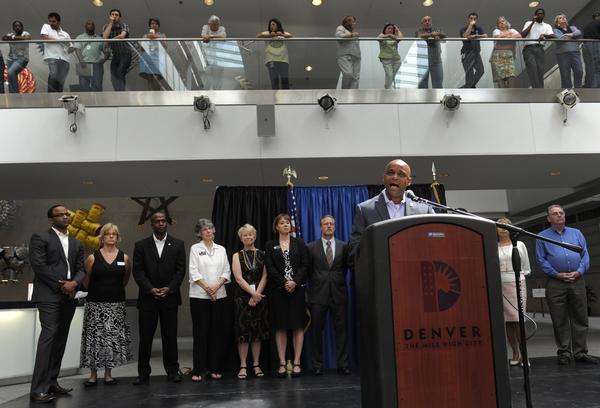 Richard Layman also offers this bit of advice about the role that elected officials should play in processes of participatory design and negotiated development:

…it’s a dereliction of the responsibilities of elected officials to act solely as cheerleaders and not as “organizers” focused on achieving the best possible outcome [for] the city and its constituent neighborhoods.

I believe that Denver’s elected officials failed us in this regard.  The Mayor was certainly a cheerleader for the project at 9th and Colorado, and by now has hopefully learned that this wasn’t the best approach.  Regrettably, Denver city councilors also showed zero resolve in “organizing” for the best possible outcome. Perhaps our civic leaders will discover some political resolve–as well as some planning imagination–if Walmart comes knocking in other Denver neighborhoods.

As for the future of 9th and Colorado, the folks at Do It Right At 9th have posted to their Facebook page a TED talk by James Kunstler that’s intended to jump-start a conversation about place-making at the site.  Kunstler is passionate in arguing that we need to create “places that are worth caring about.” Surely the 9th and Colorado neighbors will agree. But they might also understand that in order to accomplish long-term sustainability of place they’ll need to internalize some of Kunstler’s other messages.  Like the one about how, starting now, “we’re going to have to do everything very differently.”  This includes changing the way that we live (e.g., we’re going to have to downscale, re-scale, re-size, and contract), and changing the way that we think (e.g., we had better get over the “neighborhood exceptionalism” that informed a huge number of the anti-Walmart contributions to the 9th and Colorado debate). Neighborhoods like those around 9th and Colorado are both in, and of, the greater city.

Kunstler has noted elsewhere that the age of the suburban supercenter is over.  Walmart seems to realize this, and that’s why the company is eager to break into urban markets.  This fact makes it a company ripe for “collective bargaining” by other means.  Because of citizen animus and political pandering we’ll never know what Walmart might have been prepared to offer as a community benefits package and a set of place-making initiatives at 9th and Colorado.  It might have been very good stuff.  In fact, neighbors could end up ruing the day that Walmart walked away if they end up with a completed project that’s been done on the cheap because a lesser tenant (or tenants) stepped up.  Whatever happens from here, it will make for very interesting observation and analysis.

Update October 14, 2012: Denver Post columnist Vincent Carroll offers a postmortem on the Walmart War in yesterday’s edition. He buys into the “victory for the little guy” rhetoric peddled by 9th and Colorado Anti-Walmarteers, while simultaneously renewing his earlier charge that these folks suffer from an “excessively high opinion of their personal virtue” compared to those (the real little guys, as discussed above) who can’t typically afford to shop elsewhere.  Is there a politician or pundit anywhere in this town who truly comprehends the nature of urban social diversity and the challenge of planning for it?