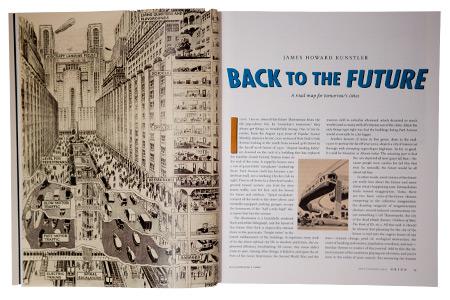 James Kunstler’s essay in the new issue of Orion Magazine speculates about the future of cities by playing off of “city-of-the-future” tropes that have long been a staple of American popular culture. Kunstler is well-known for a brand of dystopian futurism that uses the touchstones of peak oil, climate change, ecological catastrophe, and overpopulation to argue that truly monumental life-altering changes and challenges lie ahead.  His Orion essay echoes Richard Florida in claiming that we’re heading into a major “reset” of daily life, a phase that Kunstler has described as The Long Emergency.

Kunstler forecasts and promotes a return to traditional ways of occupying the landscape. We might term this The Great Contraction (with apologies to Milton Friedman).  He notes that smaller cities are inherently better scaled for the emerging energy realities.  Thus, giant cities will need to shrink and densify around their old centers.  Smaller cities that have been emptied by decades of neglect will have to be re-populated and re-activated.  Some suburbs will be retrofitted into towns (a process that is already in place), while others will become squats, salvage yards, and ruins.

Walkability will be key for successful cities.  They will also have some relationship with water power, water transport, a passenger rail network, and food that’s produced outside of town. Others will find themselves either seriously disadvantaged or SOL. Phoenix will collapse or become little more than a remote desert outpost.  Ditto Las Vegas.  Denver’s future depends on the pace of climate change in the greater Southwest.   Its success as an aerotropolis is not guaranteed given peak oil’s debilitating effect on commercial aviation.

Kunstler’s Orion piece also serves as a provocative and useful counterpoint to the ideas of some other big thinkers about the city, like Edward Glaeser and Witold Rybczynski. Apropos Glaeser, Kunstler argues that the skyscraper is not a solution to the problem of urban sustainability, mostly because we will come up short on the financial resources and fabricated materials that would allow us to maintain them.  He similarly skewers the proposal for skyscraper-based “vertical farming” as beset with a variety of practical problems that haven’t been adequately thought through.  Indeed, he characterizes vertical farming as a particularly good example of how extreme our infatuation with “technograndiosity” has become.  Apropos Rybczynski—who cites waterfront development as one of the few successes of recent efforts to renew inner cities—Kunstler argues that we’re destined to have a  “Whoops!” moment when we realize that we’ll need to restore infrastructure for waterborne trade as a consequence of the global oil predicament.  Landings, warehouses, dry docks, and even the “sleazy accommodations for sailors” that were previously demolished will need to be re-established.

As for urban architecture, Kunstler argues that we’ll need to build to human scale.  We don’t need any more “architectural fashion statements” (e.g., Landscape Urbanism) or “art stunts” that privilege spectacle over sustainability.  Waxing romantic, Kunstler argues that we’ll need buildings and places that people will care about; ones having “artistry” and “texture” and “magic” and the “power to enchant the human spirit.” Kunstler suggests that New Urbanism is, by default, the best guide for creating this kind of built environment. Indeed, he intimates that it’s the only kind of urbanism that’s really open to us at this point.

This is a terrific piece, Kunstler’s proclivities for hyperbole notwithstanding. It covers many important dimensions of the urban challenge.  But it seems to me that much of what Kunstler prescribes is perfectly at home in Old Urbanism.  And if we see human diversity as something that cities must also accommodate as we go forward–a position which recognizes that “human spirit” has always been enchanted in different ways, depending on cultural context–then we should be open to an urbanism that some are calling Intercultural.  That’s a subject for another post…