Remedying Blight, in Black and White

There was a nice story in last Sunday’s Denver Post about how community members in my neighborhood of Park Hill banded together to install a basketball court and paint a building on the site of shopping center that was burned out by gang violence in 2007.  The basketball courts join a previously constructed playground, with benches and gazebos to be installed in the coming weeks.  Construction will also soon begin on new community center, courtesy of funding from The Anschutz Foundation that was secured by the Boys and Girls Club.  A quote from 8 year-old volunteer worker Nyla Pollard captures the ethos:

I came to help my community build a park. We should have a place to play.

A subsequent house editorial in The Post commends Nyla’s activism and applauds her community for restoring pride in their neighborhood. 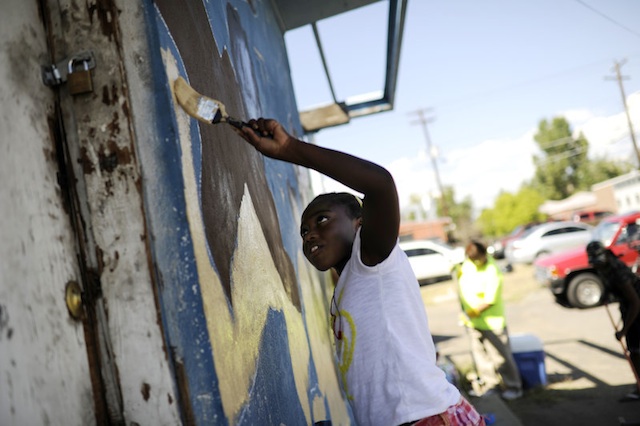 Compare Nyla’s constructivism with the obstructionism of Redshirted, Anti-Walmarteering adults at another blighted site located just south of where I live, at 9th and Colorado.  There’s a time and place for heels-dug-in resistance, but I’m not sure this is one of them.  History and context make a difference. The site is on its third developer. The second one proposed a high-density development more consistent with the Redshirts’ desires, but it couldn’t close the financing gap and bailed on the project after assuring neighbors that it would be around for the long haul.  I’m still puzzled that no one seems interested in that story and what it might suggest about the likelihood of achieving, at a location like 9th and Colorado, a high-density utopia in-filled with unique boutiques and chef-driven restaurants. It could be that the pro-Walmarteers in the area—and their numbers could be significant—have better instincts about this than the rest of us (see also here). 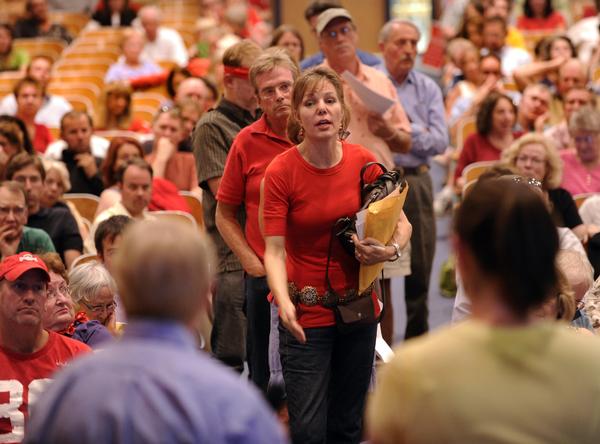 If it’s the case that you really do need an appropriately-scaled Big Box anchor to make the site work, and if Walmart is the only taker, why not negotiate in hopes of achieving a solution that would satisfy all parties?  As it stands right now the key event that’s likely to determine the fate of the project is a vote of Denver City Council on tax increment financing (TIF).  Most Council members have no direct stake in the project.  It’s not clear how many of them are dedicated to an urban vision that promotes compact, walkable, and inclusive neighborhoods. All of them are politically-motivated. On a scenario that has the Council as the ultimate decider some stake-holding demographics stand to be disenfranchised, most likely the ones that are un-represented at public meetings or that lack a place to put a bright red yard sign.

Alas, the Redshirts aren’t interested in compromise. They might not have any constructive ideas that would lead to one anyway.  Witness this week’s latest public meeting at Hill Middle School.  The agenda was to talk traffic, not tenants, and to clarify the widely misunderstood concept of TIF.  But the Redshirts were all about Walmart.  The Post reports that the meeting was “civil” except for a couple of outbursts. But in the back row where I sat there was near continuous boo-birding, cat-calling, at least one vulgar play on developer Jeff Fuqua’s last name, and not much actual listening. In fairness I should also point out that very reasonable questions about neighborhood demography and site plan directed to the developer, city councillors, and Walmart representative have gone unanswered.  In recent weeks there’s been a very serious deficit of good public discussion about this project, and the blame for that can be widely shared. 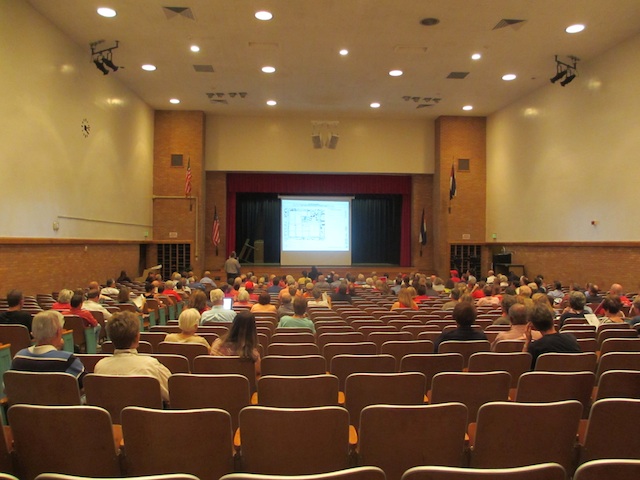 The criticisms of Walmart’s business practices are well-known, well-deserved, and especially well-rehearsed in the debate about 9th and Colorado. But as many observers have pointed out, Walmart isn’t the only member of its particular species of hyper-competitive capitalist enterprise.  We knowingly or unwittingly patronize (and/or own stock in) many others without giving a second thought to workplace safety, living wages, health benefits, unionization rights, and third world exploitation.  A sizable majority of surveyed Congress Park residents confess to shopping at Walmart while they simultaneously oppose construction of one in their neighborhood. An article in today’s New York Times suggests that some of the same hypocrisy is afoot in Los Angeles, where an urban-scaled Walmart is proposed for Chinatown.  Even if the Redshirts succeed in achieving a Walmart-free infill utopia at 9th and Colorado one certainly doesn’t get the impression that they would willingly yield the site’s “upscale” public spaces to other outspoken critics of corporate greed like, say, those scruffy and often disorganized Occupiers of Denver.  Perspective has a way of changing once you get what you want.

That’s why I think the objections to Walmart in this case are primarily about image and status (for a remarkable, internally-contradictory account from a neighborhood association president that conflates multiple issues, see here).  There’s currently no room in the public debate for the positive stories that can be told about Walmart’s practices and intentions in the areas of philanthropy, sustainability, and what appears to be growing support for small American farmers.  Perhaps there aren’t many of these positive stories, but there might be enough to work with and to which the company can be held accountable.  In the meantime we still wait for any signs of openness from the Redshirts to the reality that Walmart is a company capable of compromising and to the likelihood that it can deliver—by virtue of its anchor status—some excellent amenities for the surrounding neighborhoods.  And not just amenities for image-conscious adults but also for those—like Nyla Pollard—who have very simple needs.