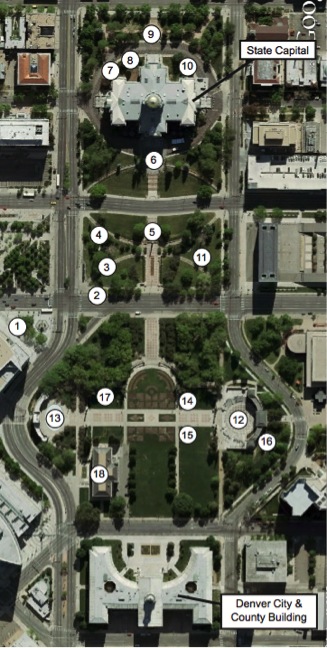 Civic Center Park. North is to the left; Numbers refer to monuments mentioned in the text (courtesy Justin Henderson)

Denver’s Lincoln Park—ground zero for the Occupy Denver protests—is part of a larger public space called Civic Center Park.  Civic Center Park is a classic City Beautiful composition. The Occupy Denver protests coincided with a required visit by my Culture and the City students to analyze the park’s  built environment and its contemporary use.  Armed with a reading by City Beautiful pioneer Charles Mulford Robinson and Spiro Kostof’s ideas about the “Grand Manner”, students were asked to explain how Civic Center Park conforms to City Beautiful ideals. This is pretty easy, as the park’s order, symmetry, classical architecture, and vista-enhancing “scenography” speak for themselves.  The more difficult challenge was to use Kirk Savage’s categories for describing urban monuments, Camillo Sitte’s recommendations for locating monuments in public space, and Dolores Hayden’s call for an inclusive public history to analyze the park’s commemorative landscape.  Because Civic Center is, for some, badly in need of renovation (a proposal solicited from Daniel Libeskind back in 2006 ended up being rejected) I also asked students for their thoughts about what could be done to improve the space.  I was especially interested in the opinions of my international exchange students from England, Italy, and the Czech Republic.

I was impressed with, and learned a lot from, the student analyses.  They clearly recognized that the commemorative landscape was biased toward white, Western culture.  Two thirds of the monuments in Civic Center Park (67%) valorize important people and events related to war and territorial expansion. These include the Colorado Veteran’s Memorial (#5 on the map, a tall obelisk located on the park’s central East-West axis) and the Pioneer Monument (#1, a gaudy Beaux Arts composition featuring life size cast bronze sculptures of a pioneer woman, a trapper, and a prospector, all topped off by an elevated Kit Carson pointing the way West).  Given their soaring figurative and symbolic forms such monuments are usefully described, in Savage’s terms, as “heroic.”  Many fewer function as Savage’s “agents of consciousness”, designed to provoke quiet reflection about the nature and meaning of history.  Perhaps the best example of the latter is the understated monument to former Governor Ralph Carr and his interventions on behalf on Japanese American internees during World War II (not numbered, but located just to the south of monument #9). 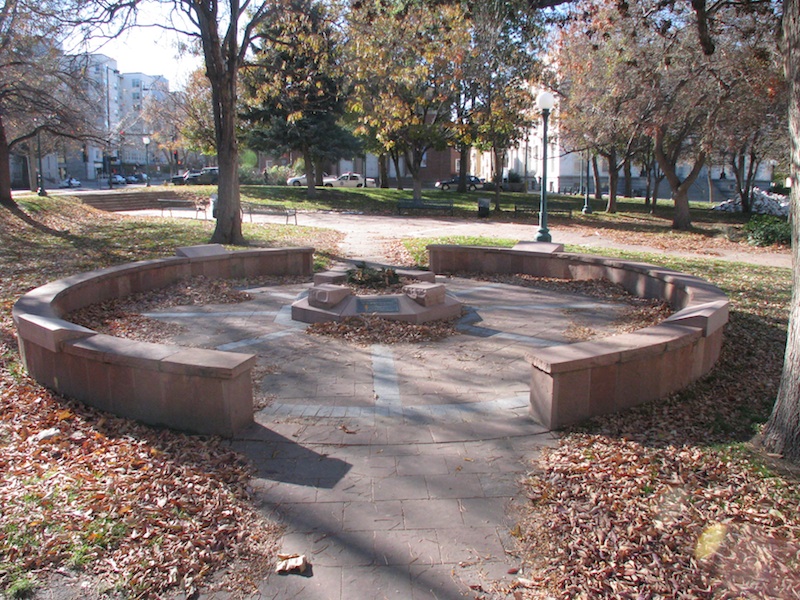 The other third (33%) of the park’s monuments speak either to women (there’s really only one other example, a monument to Sadie Likens, #2) or the ethnic “Other”, especially Native Americans.  However, students found representations of the latter to deal in stereotypes: an Indian hunter standing over a buffalo (#9, a sculpture entitled “The Closing Era”, thereby explicitly illustrating Savage’s point about how many figurative monuments serve as “instruments of historical closure”), and an Indian with spear on horseback entitled “On the War Trail” (#14). One student accurately described these as “Noble Savage” representations that fail to address the complexity of native history and risk sending the unfortunate message that Native Americans are no longer with us.  There’s only one monument to Hispanic heritage (#4, Medal of Honor recipient Joe Martinez) and nothing to commemorate African Americans. 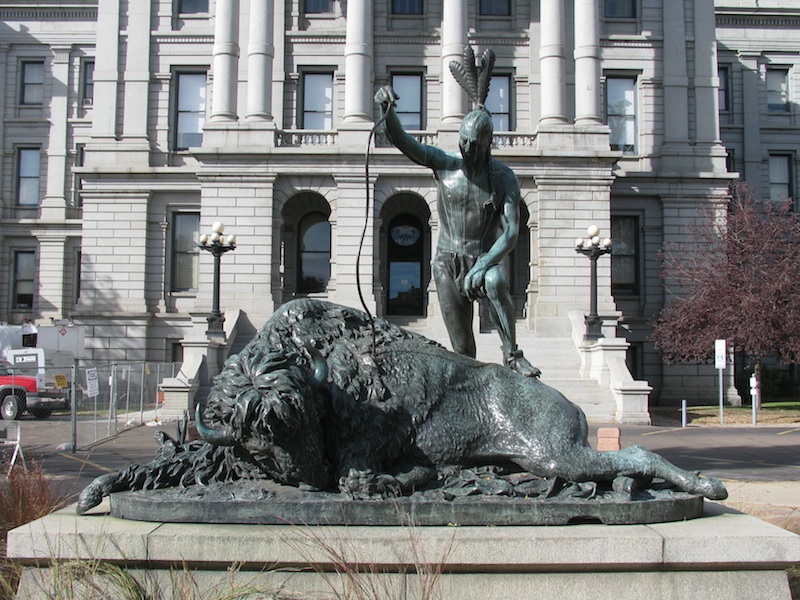 Students made a number of especially astute observations about the Civic Center monumental landscape that came as pleasant surprises.  A small plaque attached to the Civil War Monument (#6) on the front steps of the state Capitol is dedicated to the victims of the Sand Creek Massacre. Several students used this addition to illustrate Savage’s point that “the world around a monument is never fixed.”  The plaque essentially corrects the characterization of Sand Creek as a “battle” on the original monument.  In correctly describing the altercation as a “massacre” the state takes responsibility for the U.S. Army’s killing of men, women, and children at Sand Creek.

One student–Michael Swan–suggested that the concept of “meaningful adjacency” (which we discussed as a naming convention for the September 11 Memorial in New York City) is applicable to at least two sets of cardinally-located and intervisible monuments on the Civic Center landscape.  One set includes a monument to The Ten Commandments (#3, carved on a stone tablet) and The Liberty Bell (#11, a facsimile of the one in Philadelphia), and thus can be taken to represent the constitutional separation of church and state. Another set opposes the “On the War Trail” (#14) and Christopher Columbus (#17) monuments, thereby capturing the tension between indigenous and colonizing cultures.  Of course, the meaning here is not self-evident, but must be constructed in the viewer’s mind and imagination. 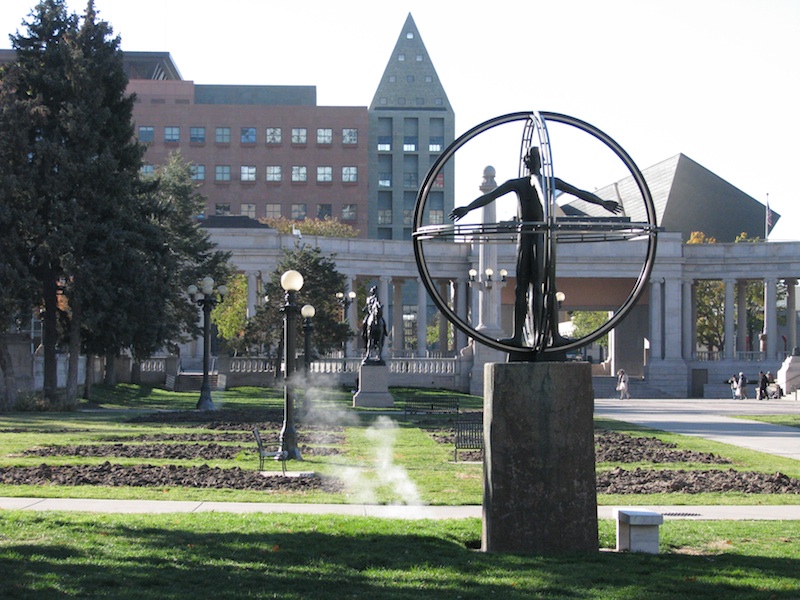 “On the War Trail” (background) and Christopher Columbus (foreground) Memorials

One of my  Italian students—Antonio De Rinaldis—was especially  creative in using a notion of symbolic geography to interpret the placement of monuments as you move from East to West on Civic Center grounds.  He noted that as the sun rises and sets over Civic Center Park it illuminates, in sequence, monuments dedicated to the aboriginal period in American history (#9, “The Closing Era” sculpture of Indian and buffalo), a period of deep internal conflict and struggle (#6, the Civil War monument with its plaque commemorating Sand Creek), and finally the modern period’s negotiations over history’s meaning (#s 14 and 17, the “meaningfully adjacent” memorials to the War Trail Indian and Christopher Columbus).  This placement is almost certainly not intentional, but the pattern–and Antonio’s insight in detecting it!–is provocative nonetheless.

Charles Mulford Robinson was big on aesthetic harmony in the classical vein as a defining feature of the City Beautiful.  But he also appreciated architectural variety provided it didn’t upset the essential harmony.  So I asked students to comment on the architectural variety of the public buildings that surround Civic Center Park.  For some students City Beautiful harmony is disrupted by Michael Graves’ postmodern Denver Public Library, Gio Ponti’s brutalist Denver Art Museum (DAM), and Daniel Libeskind’s recent “deconstructivist” addition to DAM.   Certainly, this skyline is pretty different from the one associated with Civic Center Park. For others the Civic Center’s classicism is only enhanced by the contrast with these adjacent buildings. No one mentioned the exclusivity of this skyline in terms of privileging white, western tastes; there’s nary a sign of the ethnic or syncretic vernacular in sight.  Still, I found myself persuaded by the argument for enhancement.  It’s marvelous to stand at the center of Civic Center Park and view, in one field of vision, several examples (like ‘em or not) of the major architectural traditions that have shaped urban experience over the years.  Even if this isn’t quite the “aesthetic progress” imagined or desired by Charles Mulford Robinson it’s certainly an impressive catalogue of aesthetic change. 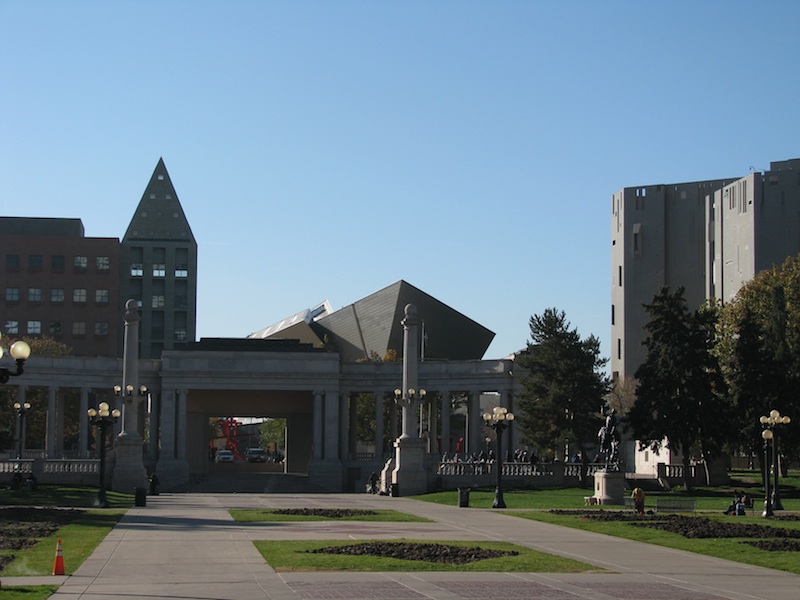 Buildings (left to right) by Graves, Libeskind, and Ponti

Finally, I asked my students to comment on who’s in the park and how it’s being used.  Several noted that Civic Center Park is clearly a contradictory space. City Beautiful design was intended to produce civic virtue—engaged citizens filled with a sense of civic pride—but the evidence of civic vice is everywhere in Denver’s civic center.  This is manifested as homelessness (understood by the students as a societal, rather than individual, pathology), drug dealing and drug use, and a powerful stench associated with the park’s use as a public urinal by homeless people and Occupy Denver protestors alike.  All saw Occupy Denver as a legitimate public use for the park, but some raised the question of how much right the occupiers have to  disturb the experience of other users.  Just about everyone suggested that the space is essentially fine as is and wouldn’t benefit from the addition of the starchitect’s avant-garde forms or soaring wings.  Simple restoration to former glory would work, along with improved pedestrian access across Broadway and Colfax Avenue, and some new monuments that acknowledge the contributions to Colorado history that have been made by a wider variety of cultural groups.