The Greatest Work of Architecture Built in this Century?

Upon hearing, in 1860, the suggestion that humankind was descended from apes the wife of the Bishop of Worcester is reported to have exclaimed: “Let us hope it is not true, but if it is, let us pray it will not become generally known.”  The same sentiment might apply to this suggestion by Nicolai Ouroussoff, outgoing architecture critic of The New York Times, in a piece in today’s edition.  The subject in this instance is Beijing’s new headquarters for the state-run China Central Television (CCTV), designed by Rem Koolhaas. 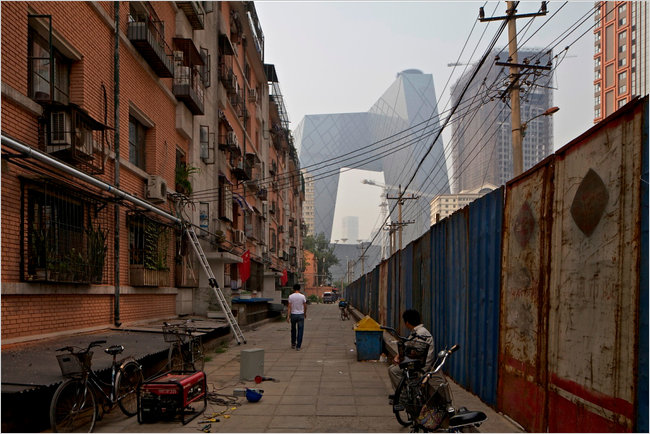 Ouroussoff loves the building because of its irregularity and how it looks different depending on the angle at which it is observed.  Plus, it’s an architectural statement that challenges shopworn modernist ideas and the oppressive “Cartesian order” that has shaped the architecture of the last several centuries.  It exposes the “conflicting energies” at work in society, and makes room for the “impurities and imperfections that make us human.”  Finally, it is a “beguiling metaphor” for China’s “headlong race into the future.”

New York Times readers—the over 150 who made this article the most commented upon of the day—have a decidedly mixed reaction.  Many admire, with Ouroussoff, the building as a “brilliant”, “breathtaking”, “magnificent”, and “exciting” intervention in Beijing’s cityscape.  Some see it as an enviable testament to China’s spirit of experimentation and cosmopolitan ambitions, especially when contrasted to the current American malaise. More, however, choose to characterize it as “ugly”, “monstrous”, “oppressive” and the perfect embodiment of Western ideals…especially since the architect himself is a Westerner.  To the extent that the building imposes itself on the city it serves as an appropriate architectural symbol for a state-run television outfit and a society where expression is closely controlled.  If this was Koolhaas’ intention, say some, then he nailed it.  Others suggest that the building says less about either China or the West and much more about Koolhaas (i.e., the starchitect’s typically big ego).  Personally, I liked the one commenter who saw in the building a Trojan Horse, which was my first impression given the photographic perspective offered above.  This certainly would be an apt metaphor for those keen to link the structure to the still-pervasive global influence of Western culture, creativity, and artistic expression.  Although several Times commenters report that the resident Chinese don’t think much of the building, dubbing it “big pants.” 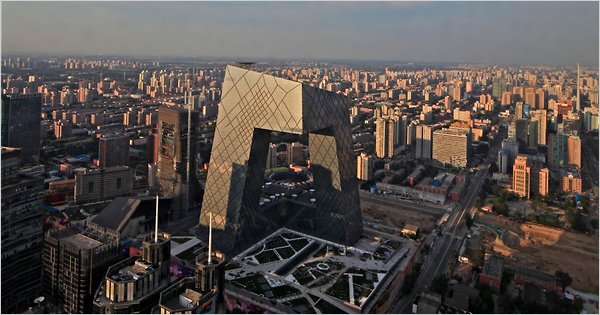 What surprised me most, however, was Ouroussoff’s nonchalance about aspects of the building that suggest an anti-social character.  In a departure from his other reviews Ouroussoff writes dispassionately about the building’s repression of the most obvious signs of human scale and its massive concrete base that–in keeping with some other notable examples of new Beijing architecture–severs it from the life of the city and, presumably, the street. Apparently these negatives are more than offset by the building’s largely open interiors (with the exception of the higher floors, which express a rigid corporate hierarchy) and provision of public exhibition, restaurant, and viewing areas. But on balance and given the first-hand testimony of those who’ve seen it, I’m not sure that Ouroussoff succeeds in convincing us that the building isn’t, as he‘s written elsewhere about urban planning in China, a “grotesque parody of American post-war development.”