Occupy Denver and The Right to the City

I’m interested in the Occupy Wall Street (OWS) movement for several reasons, not least how it relates to the idea of The Right to the City and what we might learn about using public space to secure such a right for disenfranchised and marginalized people, groups, and cultures.

Zuccotti Park in Lower Manhattan has been congenial to New York’s Occupy Wall Street protestors because it falls into a unique category of “privately-owned public space” that’s a legal gray area. Zuccotti is open 24/7 with no codified rules that regulate its use except for prohibitions on skateboarding, rollerblading, and bicycling.  This condition reflects a concession made by real estate developers who constructed the park (actually more of a “hard plaza”) back in the 1960s as a way to gain more rentable space in adjacent buildings. The park’s current owners—Brookfield Properties Inc.—recently updated park rules to include prohibitions on camping and the use of sleeping bags.  Copies of the rules have been distributed to the park’s occupiers, but the ploy was too transparent for anyone to take it seriously. 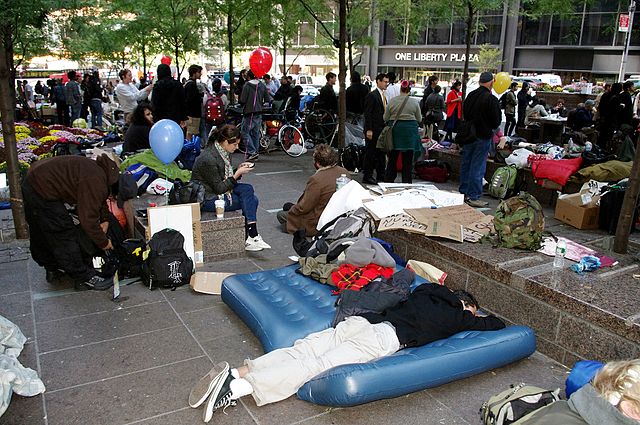 Lincoln Park in Denver—up to now the spatial focus of Occupy Denver—is another story.  Although occupiers gradually filled the state-owned park with tents over the last three weeks and were allowed to violate established rules banning camping, the other shoe dropped early yesterday morning.  With the consent of Governor John Hickenlooper and Mayor Michael Hancock police moved into the park at 3:00 am and instructed people to move out.  Although the hour of the wakeup call borders on inhumane, even the occupiers testified that they were given wide berth and lots of time to vacate the park—an approach informed by lessons that the Denver Police learned during Democratic National Convention unrest in 2008. Nonetheless, 23 arrests were made on misdemeanor charges of unlawful conduct.  I checked out Lincoln park this morning—a little over 24 hours later—and there was still a significant police presence. The park was closed but the officer who stopped me from entering said that it would reopen later for a “veterans event” that I’m not sure ever took place. 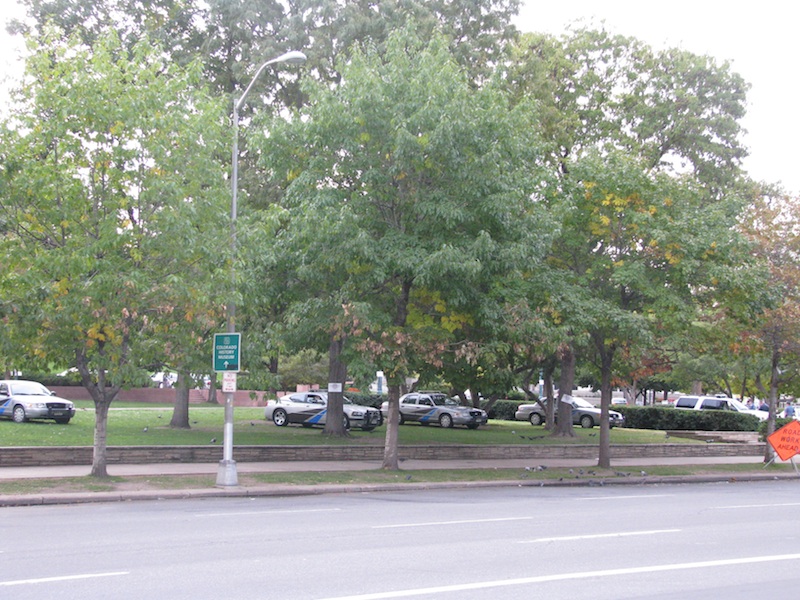 I wondered what would become of the Occupy Denver movement now that key territory had been yielded.  I haven’t found much on the internet that explicitly links Occupy Wall Street to The Right to the City via the use of public space (but see here), or that suggests a Plan B once Plan A has played out.  However, Peter Marcuse discusses OWS prospects for New York (and by implication other cities) thusly:

Will the Occupy Wall Street movement continue to grow? I think that is the wrong question. It cannot “grow” in the sense of enlarging the area it occupies, staying longer and longer and refusing to leave. There is simply no space available where it is now in New York, the weather in winter will make it simply a test of endurance… But there are alternative forms by which it can show its strength: marches, timed occupations, rallies, continued effective solidarity and networking. And refinement of claims, clarification of interpretations, pin-pointing of objectives and targets of non-violent action and exposure.

As if on cue, Denver OWS activists responded to the loss of Lincoln Park by mobilizing this afternoon for a march through downtown, targeting the Federal Reserve Bank and other high rise banks on 17th Street before ending back at Lincoln Park.  According to The Denver Post, at least 2000 people marched peacefully with the majority dispersing about 2:00 pm.  However, a small “splinter group” took to blocking Broadway and other streets around Lincoln Park and sought to re-pitch dining tents in a corner of the adjacent Civic Center Park. Long story short, police cleared Lincoln Park and surrounding streets by 5:30 and by evening’s end 24 people had been arrested—a case of déjà vu all over again. According to The Post many protestors have pledged to have another go at Lincoln Park tomorrow. 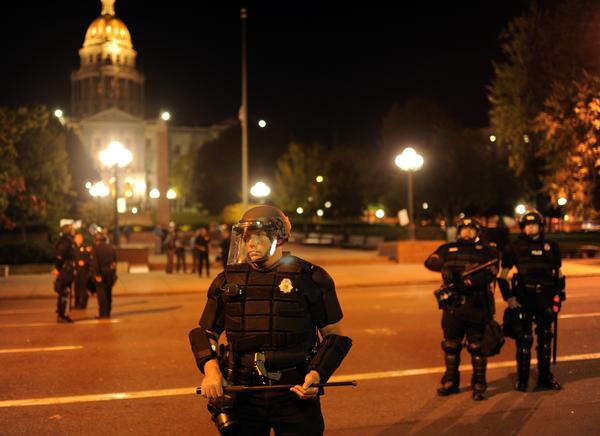 Given this most recent development and the very low probability that occupiers will, as Marcuse suggests, win a battle of physical endurance with police it might be time for Occupy Denver to adopt a different strategy. Marcuse again offers some food for thought [with editorial comment in brackets]:

One possible alternative might be for Occupy to replace a physical locational focus with a more temporal one: to meet, to occupy only during specific hours or days of the week, perhaps not always at the same location, with other locations strategically chosen….Another logical possibility might be finding locations that locally can be occupied consistently regardless of weather [or other factors]. That would be an entirely different approach, looking, for instance at Convention centers as spaces where General Assemblies might be convened, or other public halls or meeting places. Perhaps marches to strategic destinations, rather than focus on a single stable place of occupation, might work: marches to the headquarters of specific banks, specific firms, specific institutions, specific agencies…might be effective. But those decisions must be made by the participants themselves, and made with the same imagination and resourcefulness [at least as evidenced in New York] that has characterized their actions thus far.

And perhaps most importantly, this:

The growth and effect of the movement will depend, not on how many bodies occupy a specific place for a specific time, although where feasible that can help, but on the imagination with which it takes up the task of exposing the ills of which it complains, formulating the claims it makes, and developing strategies to move towards their implementation. Its allies [academics, professionals, writers, artists, intellectuals], in a supportive role, can be a big help.