The Society for American City and Regional Planning History  (SACRPH) held its biennial meeting in Toronto earlier this month.  I was delighted  to have been invited by SACRPH’s incoming president, Joe Heathcott (whom I first met courtesy of his appearance in the film The Myth of Pruitt-Igoe) to chair a session on Scholarship Blogging: What? Why?  The purpose of session was to bring together scholars who use blogs as platforms for working on research projects.  At issue were the merits of blogging as a medium for disseminating research, developing projects, and achieving other outcomes. In this post I’ll report a few of the takeaway messages of this very stimulating session.

Pierre Clavel organized the session. He blogs at Progressive Cities.  Pierre uses his blog to archive and analyze documents related to progressive neighborhood planning in American cities since the 1970s.  Many of these planning efforts are the stuff of repressed history, especially where they focused on the redistribution of resources to poor neighborhoods and the opening of city halls to wider public participation (e.g., Harold Washington’s work as mayor of  Chicago or Ray Flynn’s work as mayor of Boston).  These initiatives have been unreported and/or unremembered by scholars and mainstream media alike. Progressive Cities collects and preserves their historical record.

Christopher Leo blogs at Christopher Leo.  Chris is a senior scholar at the University of Winnipeg and a former journalist.  He tackles another kind of visibility problem as concerns research on the city.  That problem is limited public access to the scholarly literature about cities.  Chris accurately notes that academic publication systems almost guarantee a minimal readership for scholarly work. Blogs can be a solution to that problem, especially when they combine the best of the academic and journalistic enterprises. Chris not only seeks to make good academic research more widely available, but also to demonstrate its value to the planning professions.  Moreover, he uses his blog to provide reading material for students and to challenge them to delve into urban issues much more deeply than they ordinarily might.

Kenneth Fox blogs at the Merton-Columbia Project.  Ken is working to develop a concept of “blog publication”, a corollary to the notion of “oral publication” promoted by sociologist Robert Merton beginning in the 1950s. Like Pierre and Chris, Ken wants to get rarely studied material into the public realm. In this case, the  material is from the Robert Merton papers held by  Columbia University’s Rare Book and Manuscript Library and the Robert Merton Literary Estate.  A central objective for the blog is to engage current activists and researchers in dialogue about theories of urban social structure and development. In his presentation Ken reminded us of the importance of carefully adhering to permission conditions if blogs are to succeed in providing archival material for wider study.

LaDale Winling blogs at Urban Oasis. A historian on the tenure track at Virginia Tech, LaDale is a younger scholar who has been blogging since 2004.  For LaDale blogs have several virtues.  Echoing Chris Leo, they are a way to create, maintain, and disseminate a personal body of academic work.  They are also a way to create an online scholarly identity–something that’s especially important in a world where everyone and everything can be googled. Most importantly, blogs allow a scholar to actively shape the identity that others encounter on the web.

The session was very nicely discussed by Anabel Quan-Haase, an Associate Professor of Information and Media Studies and Sociology at the University of Western Ontario.  Anabel writes at sociodigital.info.  Like the other panelists, she sees blogging as an excellent tool for disseminating knowledge.  She agreed with LaDale about the relationship between blogging and personal identity.  In Anabel’s words, blogging helps to “write oneself into being.”  However, contributing to a community is also important.  To accomplish that goal a blog doesn’t need a huge audience.  Bloggers should be aiming for a particular niche, and they can succeed even if the space they establish lies in the “long tail” of a readership’s distribution.

As a first-time SACRPH attendee I wasn’t sure what to expect from the session. I certainly  expected participants to be supportive of the blogging enterprise.   Ladale Winling has already posted some of his takeaway lessons at Urban Oasis:

One of the things this panel illustrated for me is that academic (certainly historians’) concerns about blogging have not changed much since 2004 when I started blogging. The main one is about taking time away from writing for publication. The second one is about putting ideas out that will be swiped by someone else. Both of these have to do with the publish or perish standard we have adopted for tenure and tenure-track positions, as well as tenure-track hopefuls. If there was a third, I would say it was about the issue of feedback and community.

No one on the panel seemed much concerned about having their blogged ideas stolen. As demonstrated above, the panelists are keen to use their blogs as a way to more widely disseminate scholarly knowledge about the city, especially knowledge that, for whatever reason, has been purposely forgotten or simply fallen between the cracks.  Whether there are any institutional rewards for scholarly blogging—e.g., whether the work will be valued by university tenure and promotion committees—is another matter.  There seemed to be general agreement that blogging is something younger scholars need to carefully balance with more traditional forms of writing; they need to find the right level of “digital engagement.”   But blogging is writing, and LaDale notes in his post how his blogging invigorates his scholarship.  I have to agree.  Writing regularly for Intercultural Urbanism has certainly liberated and sharpened my thinking about the city.  It has also created numerous opportunities—like Joe Heathcott’s invitation to chair the Scholarship Blogging session at SACRPH—that I never would have gained if I limited myself to traditional forms of writing in and for my academic discipline.  And echoing Chris Leo, blogging has helped me better focus my teaching while giving at least a few of my students the sense that their writing about the city really matters (e.g., see here and here). 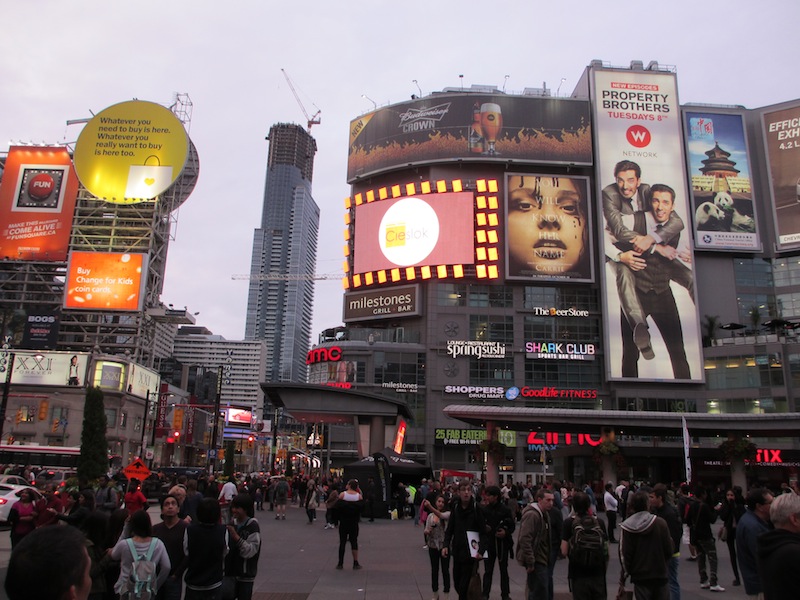 Toronto is a great place to have a conference about cities.  SACRPH was one of the more stimulating interdisciplinary conferences that I’ve ever attended.  And the Scholarship Blogging session succeeded in sponsoring a fruitful discussion of its subject across the disciplines of anthropology, history, sociology, and urban planning.  Still, participants were puzzled that the session wasn’t better attended given today’s “tectonic shifts” in how information about the city is being gathered and disseminated.  This was especially puzzling given what I took to be the most compelling discussion topic that percolated throughout the SACRPH conference over its three days. That topic concerns the relative merits of Big Data Generalizations vs. Particular Narratives of Place as a way to understand the life of a city.   Aggregated Big Data (e.g., individual transactions gathered from smart phones, credit card purchases, and other sources of information) invite all sorts of interesting studies of consumer choice and human behavior as they relate to urban planning.  But at the end of the day there’s no substitute for the individual, place-based, thickly described narrative that documents city life in all of its sensory glory: the sights, the sounds, the smells, the feels, the chance encounters, the brushes with human difference.  A well-attended SACRPH roundtable discussion on The Physical City: Social Change and Urban Space noted the important role that blogs played in sharing information, connecting strangers, and building community during the Occupy Wall Street insurgency.  Some Occupy-focused blogs–like Peter Marcuse’s–offered very useful suggestions to those of us in other cities about what it takes to sustain an urban movement.  Several other SACRPH sessions highlighted the importance of place-based narratives for humanizing and, where appropriate, politicizing that which Big Data risks dehumanizing and depoliticizing.  Throughout the conference assembled crowds seemed to favor these fully experiential approaches to studying city life, educating planning professionals, and formulating urban policy.  If that’s truly the case, then blogging is one of the best ways to advance those understandings of the city that SACRPH attendees seemed keenest to develop.