Denver is well-known nationally as a city dedicated to New Urbanist development.  Several projects in the city—most notably Belmar, Stapleton, and Highlands Garden Village (HGV)—have received lots of prominent press and some significant praise.  The Congress for the New Urbanism has visited Denver twice, most recently in 2009.

Denver’s New Urbanist projects have had a number of years to mature.  Accordingly, I sent students in my Culture and The City course to compare and contrast two of them.  Specifically, their task was to (1) discuss how each project conforms to New Urbanist goals and ideals; (2) critically evaluate their prospects for success in light of current ideas about urban ecological and cultural sustainability; and (3) identify the development that they would most like to live in, and explain why.

The class was an interdisciplinary and international extravaganza.  I had majors from across the Arts and Sciences, plus six foreign exchange students from Italy, Britain, and the Czech Republic.  Rounding out the class were one Hispanic-American student and an African student from Liberia. Of the 28 enrollees 5 were Sustainability minors.   Four were anthropology graduate students working in the field of museum and heritage studies.

I previously reported the lessons learned from assignments that asked the students to play the BMW-Guggenheim Lab’s Urbanology game and analyze  Civic Center Park.  I couldn’t very well let them get away without dissecting the urban phenomenon for which Denver is arguably most famous. The assignment takes on added interest in light of Christopher Leinberger’s recent New York Times piece suggesting that the “Millennial” generation of current college students is increasingly being drawn to compact, walkable cities like those promoted by New Urbanism (for some reader responses, go here).  Thus, the assignment was an opportunity to learn what kind of New Urbanist development most interested a group of international Millennials. 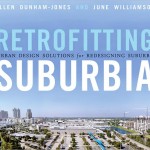 Students were required to visit Belmar  because it has been comprehensively described by Dunham-Jones and Williamson in chapter 8 of Retrofitting Suburbia.  They could choose one other project, either Highland Gardens Village, Stapleton, or The Streets at SouthGlenn. Next year I will likely give students carte blanche to compare any two projects of their choosing, with Central Platte Valley, Curtis Park, and Lowry also thrown into the mix. 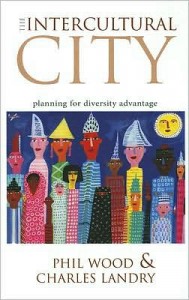 In addition to the Belmar reading students were assigned The Charter of New Urbanism, an excerpt from chapter 7 of Phil Wood and Charles Landry’s The Intercultural City,  Jeb Brugmann’s chapter on  “Building Local Culture: Reclaiming the Streets of Gràcia District, Barcelona” in his Welcome to the Urban Revolution, and Mike Davis’s chapter on “Fortress LA” in City of Quartz.   They could also dip into a previously assigned classic from Jane  Jacobs. I steered them to some concepts in this body of work that struck me as especially relevant.  Foremost among these was Wood and Landry’s notion of “cultural literacy” and how the “basic building blocks of the city”—street frontages, building heights, set-backs, public space, etc.—look different when viewed through “intercultural eyes.”   I wanted students to consider the extent to which New Urban projects exemplified the Barcelona urbanist’s particular concept of espai public—defined as a distinctive “third territory of streets and squares where private interests and public uses are vitally interwoven.”   Davis’ book is a veritable cornucopia of useful and provocative concepts.  I wanted students to attend to his notions of “spatial apartheid” and the “archisemiotics” of built form–the latter broadly understood to cover the meanings conveyed by a project’s architecture, advertising images associated with the project, and other features of the designed environment.

The vast majority of students chose to compare Belmar and HGV.  Their analyses made for interesting reading.  There was a strong convergence of opinion as regards the virtues of these projects.  All students appreciated their commitments to building green and especially Belmar’s investment in harvesting solar and wind power. Belmar’s public square and restaurant patios—combined with the “Big Windows” of retail spaces that maximized the intervisibility of private and public space—were identified as the best examples of New Urban espai public.   A smaller number of students appreciated the significance of Belmar’s Block 7 Arts and Design district while expressing 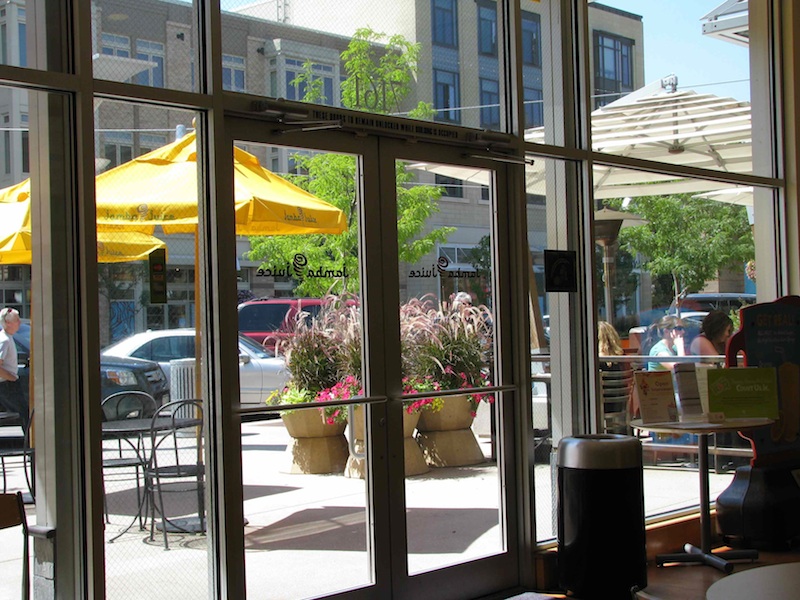 concern that there wasn’t more public art on Belmar’s streets (as promised by its development plan).  The Community Garden at HGV drew a lot of favorable comment. Europeans in particular liked the way that HGV’s winding roads and pathways broke up the older street grid. Americans and Europeans alike appreciated the preservation of historical structures dating to the site’s use as Elitch Gardens Amusement Park: the old 1891 Theatre building and the 1926 Carousel Pavilion.  The former is destined to become performing arts center and the latter is already serving as a site of 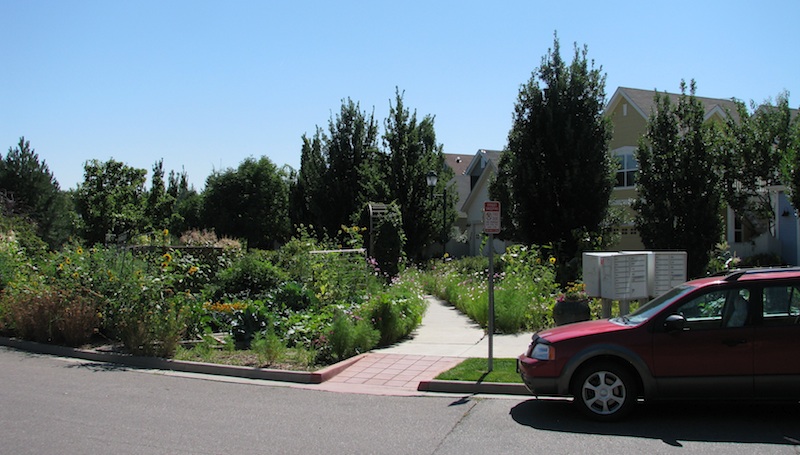 various community events such as concerts and farmer’s markets.  One graduate student who analyzed The Streets at SouthGlenn identified its branch of the Arapahoe Public Library as best exemplifying the “spaces of day-to-day exchange” that Wood and Landry have found to be among the most popular for intercultural populations in Britain. 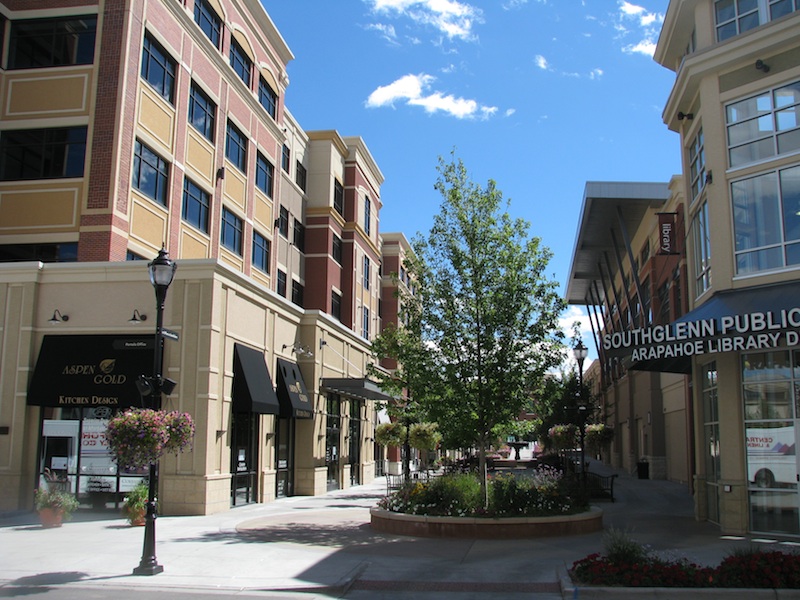 Library (right) and Pedestrian Promenade at The Streets at SouthGlenn

Despite these virtues students were unsparing in their criticism.  Belmar was often described as a “packaged” experience, with students using words like “commercial”, “artificial”, “inauthentic”, and “branded” to make their case.  Some likened Belmar to an “outdoor mall” and the kind of downtown that’s more befitting an alpine ski resort than a Denver suburb that’s looking to become more urbane. One graduate student  wondered if Belmar’s Lily Pad Lane—a pedestrian path with rainforest motif and piped-in nature sounds—was inconsistent with the commitment to build a “real” downtown for Lakewood.  A similar sentiment was expressed with respect to the music that’s piped into The Streets of Southglenn—the feeling being that these should be chaotic, cacophonous spaces rather than clinical ones akin to the old indoor shopping malls that they’ve replaced.  A British student remarked that Belmar’s “High Street” was curiously empty on a lovely Saturday afternoon in autumn. American and European students alike commented that, at the time of their weekend visits, there was more activity in Belmar’s  “Big Box” store parking lots than on its streets.  Indeed, for all students the Big Boxes compromised the scale and intimacy of the Belmar and SouthGlenn developments. 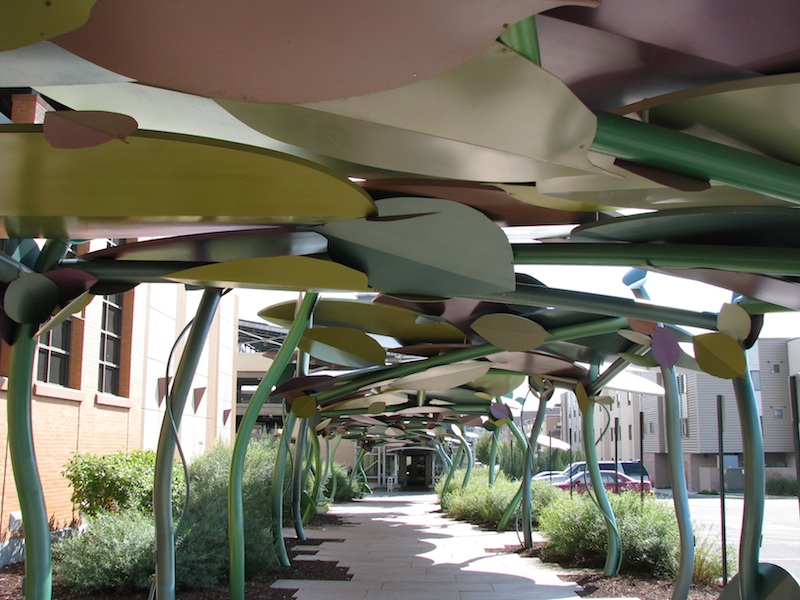 Students noted that investments in ethnic and cultural diversity  at Belmar were lacking aside from the annual Festival Italiano and the sprinkling of ethnic restaurants.  No one mentioned it, but Wood and Landry’s use of the term “cultural cross-dressing” to refer to these (superficial) indicators of interculturalism would have been appropriate.  One student was struck by the police presence at Belmar, contrasting it with the “eyes on the street” that would be the most important security feature of Jacobs’s “two-shift” city.  Several perceptive comments were made about the semiotics of built space at both Belmar and SouthGlenn.  Retail advertising in both places is targeted to white people, especially young, middle-class women. One student noted that the array of medical services available at HGV (where dedicated housing for seniors is one component of the residential complex) signaled not only something about generational makeup  but also the class and discretionary income of residents (e.g., a chiropractor’s office).  “Neighborhood Watch” signs at HGV did not escape notice. 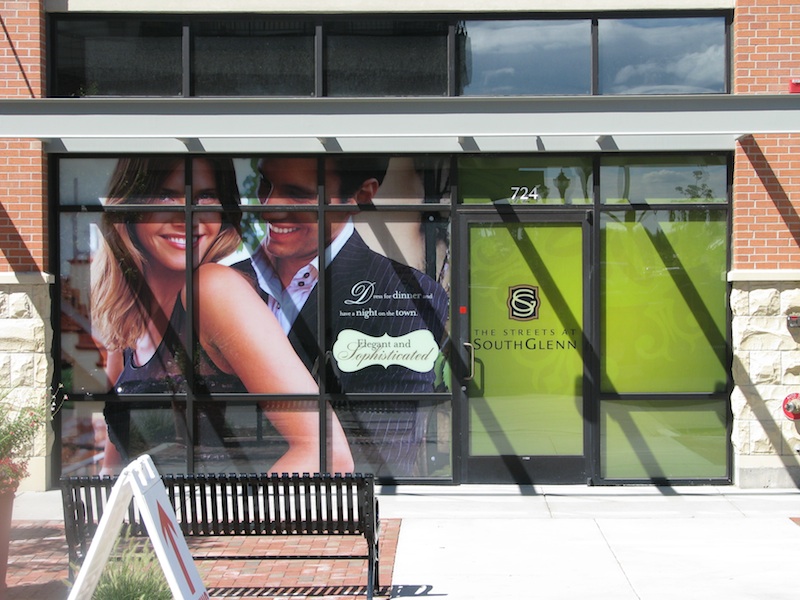 Advertisement at The Streets at Southglenn

A large number of students focused on the Charter for New Urbanism’s call for developments that seamlessly connect to their surroundings.   Most students didn’t see it.   At Belmar the broad, six lane avenues that  border the project to the north and west were seen to function as de facto “gates”  separating it from the adjacent (and largely Hispanic) neighborhoods. HGV was seen to blend a little 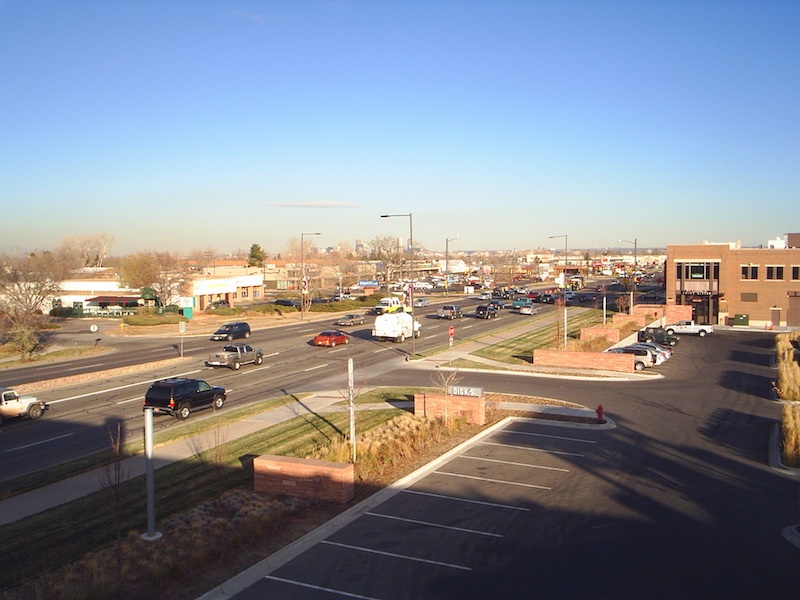 Alameda Avenue, Belmar’s Northern Boundary (Belmar is to the right)

bit more into its context, but students still commented on how even here the project edges are a bit jarring.  One European student who visited HGV, Belmar, and Stapleton commented that the trip to these places by public transport (from their flat at the university) took about three times as long as by car. 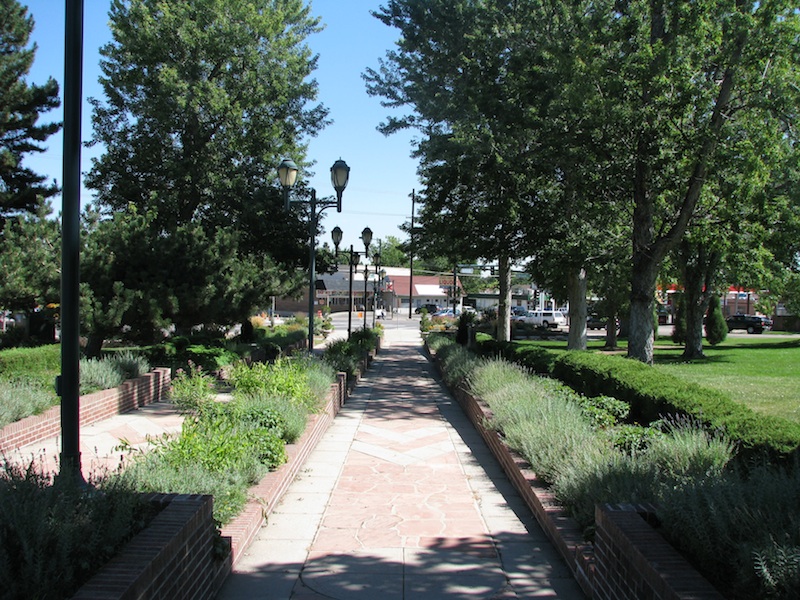 View to the Northeast Edge of Highlands Garden Village

The other Charter ideal that drew comments was housing.  Many students noted the diversity of housing options available at both Belmar and HGV.  Affordability, however, was seen to be  another matter.  Some students provided comparative data suggesting that housing prices were likely prohibitive for people who weren’t urban professionals, and questioned whether people working at retail businesses in these projects could also afford to live there (a key New Urbanist ambition).  One student sought an answer by interviewing a (non-white) person working at a Belmar Information Desk. This woman had been a resident at one time, but now lives elsewhere.  Interestingly, she reported that Belmar is being increasingly occupied by aging Baby Boomers and college-attending Millennials. This observation is consistent with the realtor survey data reported by Leinberger in his New York Times piece.

Student preferences for the development in which they’d most like to live were interesting and, to some extent, surprising. American student opinion was decidedly mixed, favoring Belmar by 58% to 42%.   The case for Belmar turns on it being viewed as a livelier place, with access to a greater variety of activities and services.  American Millennials  also preferred Belmar’s modernist architectural aesthetic over the more traditional pitched roof and front porch aesthetic of HGV.  Conversely, European Millennials favored HGV over Belmar by a decisive 80% to 20%.   Key to the European students’ evaluation was HGV’s location and surroundings.  Although HGV has an older demographic young Europeans liked the easier bus access to Denver’s downtown, the project’s fit with other parts of the renewed Highlands area, and the overall greater feel of community. Some liked the pastel colors and “folk” character of  HGV architecture that reminded them of small towns in Europe.  One liked HGV because the Carousel Pavilion reminded her of the gazebos to be found in many city centers in the Czech Republic. Apropos the “wider context” consideration, one British student very perceptively said of Belmar that “I don’t feel that the local area understands it well enough to welcome it properly” and that it lacks an identity (the subtle attempts to “brand” itself reported by Dunham-Jones and Williamson notwithstanding). Finally, my four graduate students expressed four different preferences (opting for Belmar, The Streets at Southglenn, HGV, and Stapleton, respectively).   My Hispanic American student reluctantly threw in with Belmar.  My Liberian student refused to make a choice, as he was put off by both alternatives (I’ll be posting something about African Urbanism very soon).

Theatre Viewed from the Carousel Pavilion at Highlands Garden Village

The main lesson of this exercise is that Denver’s New Urbanism is decidedly mixed in its appeal to a diverse group of Millennials.  The European result suggests that New Urbanism is on the right track in terms of appealing to at least Western Anglo and Continental intercultural tastes and values.  It also enjoys some success in meeting its goal of fostering community. Attracting diversity is another matter altogether.  Denver’s New Urban projects still signal–to Americans, Europeans, and ethnic “Others” alike–homogeneity and exclusivity.  This gives one pause to wonder whether New Urbanism can really succeed in accomplishing, at the same time and within the same program, its diversity and community goals.  Wood and Landry challenge architects and planners interested in intercultural city-building to either structure space so that different cultures might see and use it in a variety of ways, or create more open-ended spaces to which a broad variety of intercultural “Others” can adapt (perhaps along the lines of an entropic urbanism).  Some students wish to challenge New Urbanism in the same way.  Alternatively, one student questioned whether New Urbanism is capable of producing an intercultural city at all.  As she put it, perhaps an intercultural city already exists in the urban fabric and just needs some poking and prodding—using other varieties of urbanism as a guide—to draw it out.