Has Pruitt-Igoe Been Demythologized?

The short answer is Yes and No. Details ahead…

Last week I finally had a chance to see the much-heralded film The Pruitt-Igoe Myth: An Urban History at the Denver Starz Film Festival.  I wasn’t disappointed. It’s a powerful and visually stimulating piece of work.  I learned several new things about this failed experiment in post-war “urban renewal” from both the film and the talkback with filmmaker Chad Friedrichs who was on hand to discuss his work.

The Wendell O. Pruitt and William L. Igoe housing blocks were originally drawn up in 1952 as two racially-segregated, “modernist” high rise developments in St. Louis.  Pruitt was for blacks on the north side of town, and Igoe was for whites on the south side.  Failure to secure the south side parcels of land in a timely manner led to the developments being combined on one 57 acre site to the north of the city. There were some whites who lived at Pruitt-Igoe when it opened in 1954.  However, that year’s US Supreme Court’s decision forcing desegregation effectively transformed Pruitt-Igoe into an all black community. 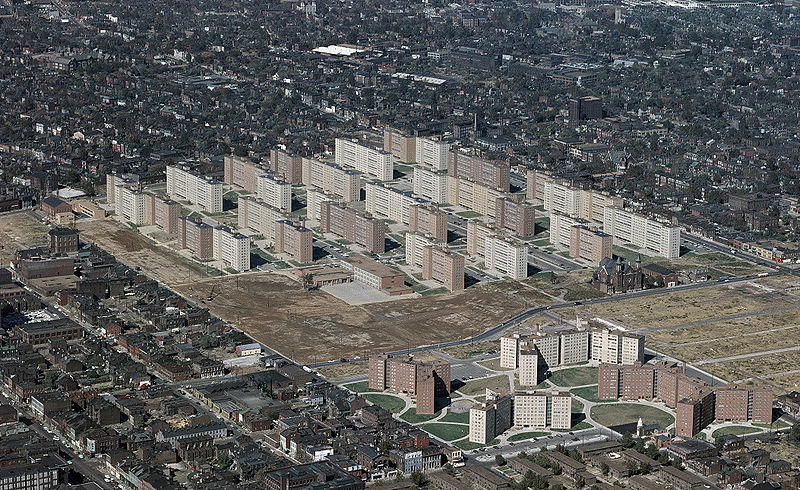 The film successfully debunks one of the myths that I completely agree surrounds Pruitt-Igoe—that black culture and the absence of proper middle-class values were responsible for community’s disintegration.  Although the sample is very small, interviews with former residents reveal the pride and love that people had for the place.  One describes her 11th floor apartment as a “poor man’s penthouse.”  Others fondly (and even tearfully) recall the buildings being illuminated by hundreds of lights at Christmas time, the appealing aromas of many dinners being prepared, and the lively “block party” atmosphere created by record players being pulled to doorways and windows.

I confess to using Pruitt-Igoe in my teaching in the second “mythical” sense that  Katharine Bristol, in a 1991 article in the Journal of Architectural Education, sought to debunk: that modernist architecture was to blame for the community’s disintegration.   I’ve always found something pedagogically useful in Charles Jencks’ famous equating of the controlled (and nationally-televised) implosion of Pruitt-Igoe’s first tower at 3:00 PM on March 16, 1972 with “the death of modernism.”   The issue is whether this is overstating things.  Friedrichs’ film does not really address Pruitt-Igoe’s architecture one way or another, treating it more as a setting and backdrop for behaviors that are better explained in other ways.  But it clearly channels the essence of Bristol’s argument.  In his talkback Friedrichs pulled no punches in dismissing the role that architecture played in the housing project’s disintegration.  He noted that modernist high rises for poor people were constructed in many other American cities throughout this period and most of those didn’t suffer the same fate as Pruitt-Igoe. 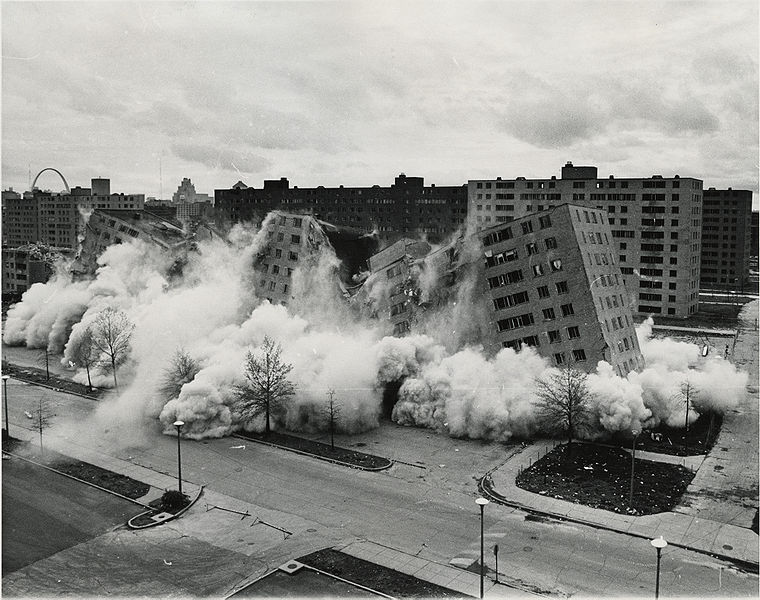 The alternative explanation suggested in the film, and reiterated by Friedrichs in his talkback, invokes a complex mix of economic and social factors that brought many American cities—especially St. Louis—into crisis after World War II.  De-industrialization produced dramatic job losses in urban cores.  Federal housing and highway policies incentivized white flight to suburbs.  Projected increases in urban population size did not pan out as cities were rebuilding, and overbuilding, their centers.  St. Louis hit its population peak of around 850,000 people in 1950 and it was all downhill after that.  The St. Louis Housing Authority planned Pruitt-Igoe’s construction but failed to plan for its maintenance.  Upkeep money had to come from tenant rents, but as occupancy declined, poverty deepened, and costs escalated the money just wasn’t there.  St. Louis Housing Authority policy also prohibited able-bodied adult males from inhabiting the apartments of women receiving welfare assistance. This contributed to the break-up of families and frayed the community’s social fabric.  Police stopped coming to the projects when the muggers and drug-dealers moved in.  Racial discrimination, including institutional racism, complicated the lives and life chances of the residents.  Pruitt-Igoe’s undoing was, as one interviewed expert opined, a “slow motion Katrina.”

I certainly agree with the importance of these economic and institutional forces—also nicely detailed in Bristol’s article—in determining Pruitt-Igoe’s fate.  But given the importance of architecture in human affairs and, especially, its role in transforming built space into owned place  it seems short–sighted—and inconsistent with any explanation that invokes “complexity” of cause—to rule it out completely.  Even Bristol notes that architectural design was one factor in Pruitt-Igoe’s disintegration, albeit not the most important one.  Mention is made in her article, and also throughout Friedrichs’ film, of how various design elements conspired against residents.  These include deliberately small apartments, undersized kitchen appliances, inadequate plumbing, and other cheap furnishings.  Undersized elevators that “skip-stopped” on every third floor increased the personal risk to women and children (especially when things started deteriorating after 1957) by forcing them to reach their apartments through long corridors and narrow staircases.  The elevator stop “galleries” themselves—intended to support community association—came to be described by residents as “gauntlets.”  The open, park-like spaces around modernist towers have never been particularly inviting or well-used areas no matter where they’ve been built, and Pruitt-Igoe was no exception.  The standardized, non-human scale of the towers—nicely captured by the film’s compelling aerial and ground level photographs—gives off a decidedly sinister vibe when viewed from particular angles and in particular lights. 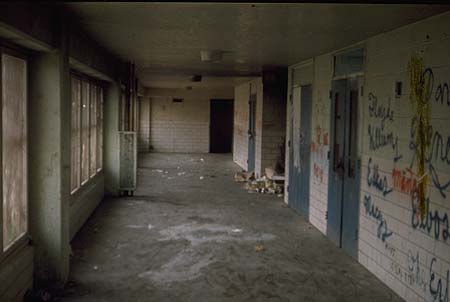 I’m also tempted to suggest that the small apartments, and perhaps even the shared spaces, were incompatible with the social values borne by migrants coming into St. Louis from the south who, ultimately, traced their heritage to the strong communal cultures of West Africa.   Some reviews of the film (e.g., here) note that the nearby Carr Square Village—a low rise, lower density development with a comparable demographic makeup that was built in 1942—did not suffer from the vacancy and crime that afflicted Pruitt-Igoe. Interestingly, Pruitt-Igoe was originally designed as a mix of buildings of varying heights and densities rather than the 33 eleven-story high-rises that were eventually built. We’ll never know if the Pruitt-Igoe story would have been different had the original design plan been approved.

Bristol rightly notes that failure to acknowledge wider political and economic conditions too often leads us to blame the people who’ve been victimized by those conditions. She notes that architects can’t be blamed for Pruitt-Igoe either, given their powerlessness to change the wider structures, practices, and attitudes that governed its construction. In another sense, however, architecture is the most important causal factor in Pruitt-Igoe’s story because it’s the one variable that was always under some sort of direct human control.  Pruitt-Igoe’s architects were clearly working under strict constraints imposed by the St. Louis Housing Authority.  But the design team consciously opted for the modernist program when other choices were available, and even Bristol notes that they were “insensitive” to the consequences of their choices.  Erring too much on the side of structural causality risks absolving these agents of too much responsibility.  There are times when the debate about Pruitt-Igoe should be diverted to what Bristol calls “the question of design.”  Today architects are increasingly taking advantage of their power of choice—and improved intercultural literacy—to design affordable housing that’s more livable and lovable (e.g., here and here).  Perhaps the most important lesson of Pruitt-Igoe is that we should always and everywhere see the life and death of buildings as complexly overdetermined in ways that encourage us to take greater responsibility for those things in life that we can, in fact, influence and control. In that sense Pruitt-Igoe hasn’t been, and doesn’t deserve to be, demythologized.

Postscript: Carr Square Village has been replaced with even lower-density single family housing. The site of Pruitt-Igoe remains a ruin.

Update: The subject of Pruitt-Igoe is revisited here.