Having just returned from the English capital I was intrigued to learn that the New York Times architecture critic Michael Kimmelman also recently visited London to consider the high rise building craze that we previously discussed here. Mr. Kimmelman’s piece in last Thursday’s Times makes some good observations and suggestions.  For example, with respect to The Shard—a frequent topic of conversation among our London friends—Mr. Kimmelman notes that:

…[The Shard] is hulking and unimpressive at street level. But adding density at a rail hub makes sense…And from afar the vertical faceting of The Shard’s facade reduces the impression of bulk. The crystalline effect is subtler than many Londoners feared. The building almost evaporates in certain soft light, its crown dissolving into a mesh of attached screens…

This evaporative effect is something that I think is evident in the photograph of the Shard in my Towers of London post as well as, perhaps, in this view of the building from Farringdon Road:

View of The Shard from Farringdon Road (D. Saitta)

Mr. Kimmelman charitably suggests that, like the regenerated Olympic Village, “we’ll have to wait to see how [The Shard] works after it’s finished.” 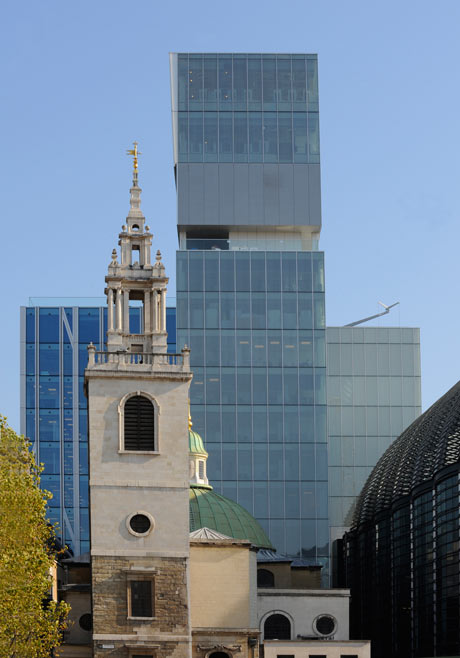 The majority of Mr. Kimmelman’s piece, however, is devoted to another new tower in The City, the Rothschild Bank’s New Court building, by the firm of Rem Koolhaas. A review of New Court by The Observer’s Rowan Moore is complimentary, noting that this building has—in contrast to much of Koolhaas’s work—“ghosted its way on to the skyline with a surprising degree of discretion.” Mr. Kimmelman likes it too, praising the building’s profile as “distinguished.”   Playing off of Mr. Moore’s earlier analysis of London’s towers in which, among other things, he challenges architects to think about the street-level public spaces that their buildings create, Mr. Kimmelman notes that:

The plan… with a quasipublic plaza that links the covered forecourt of [New Court] with the graveyard of [an adjacent Christopher Wren Church, St Stephen Walbrook] is ingenious, elegant…a glass and aluminum colonnade defines the street edge, with a broad portico and pedestrian passage behind, framing the church view. The plan brings transparency, surprise and civic grandeur to a narrow lane; and by revealing Wren’s building, it invents a pas de deux, the Rothschild tower nodding to the tower of St Stephen. 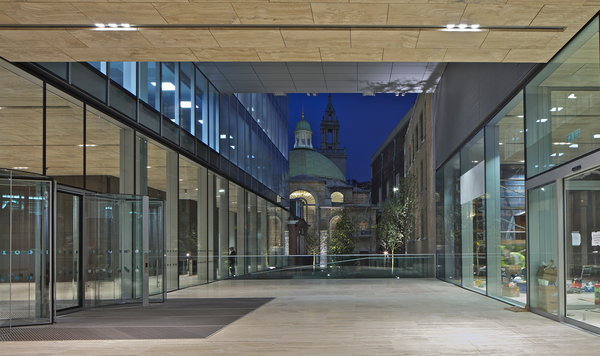 This assessment of New Court agrees with Mr. Moore’s that the building offers welcome relief from the many City structures that, in Moore’s words, “rise sheer and opaque from the pavement.”  Nonetheless, Mr. Kimmelman—admirably keeping to his mission of focusing on the democratic and socially-redeeming qualities of architecture—holds that public access could be better:

I said quasipublic earlier only because while you can now see St. Stephen from St. Swithin’s Lane, you can’t get to it. A gate between forecourt and churchyard is locked; bank guards discourage the curious. So, unfortunately, an architecture of openness meets the architecture of paranoia that has reshaped cities like London and New York for more than a decade.

As is typical of Londoners when it comes to the subject of architecture, the opinion of New Court among Observer readers is more divided than among the professional critics.   One reader is with Mr. Kimmelman and Mr. Moore in appreciating New Court’s virtues:

Though never a Koolhaas fan, this building shows great restraint, fitting into its surroundings quite beautifully. [It’s] what architecture should be about.  [It’s a] shame so many others can only grandstand…

For another reader, however:

…the small [Wren] church in front has more identity than that monstrosity behind it…all you have to do to see if a building is good is to imagine it as a silhouette in black. The church would have a distinctive profile, the masses of block behind would look like masses of blocks…. 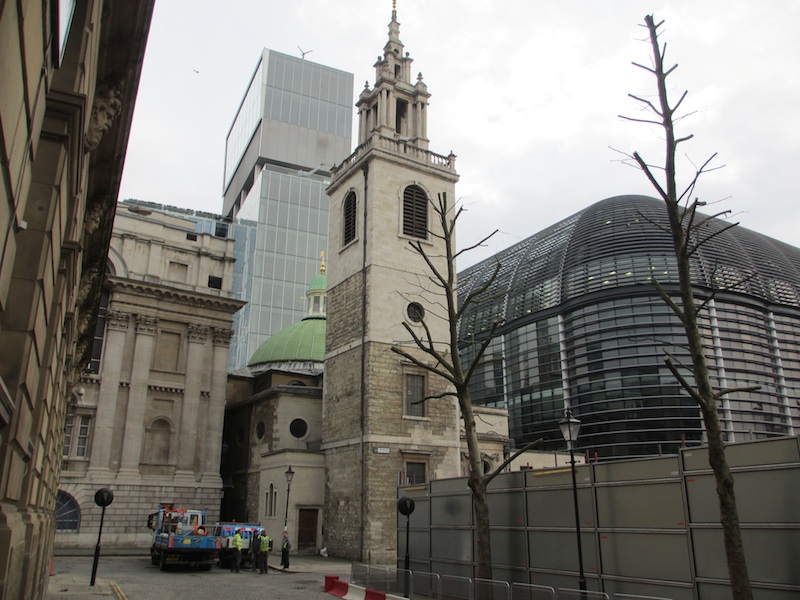 It’s nice that New Court and another adjacent but much more critically reviled building—Norman Foster’s Walbrook, which Moore accurately describes as “an assertive, ribbed, over-inflated blob”—gesture  to St Stephen in their cornice lines and, in Walbrook’s case, to St Stephen’s famous dome (which is based on the original design for St Paul’s Cathedral).  While I do like New Court, I’d have to agree that the most significant effect of these two particular London buildings is to make one appreciate Wren’s church all the more.  And perhaps that’s the most important contribution of  London’s new towers to the city’s architecture.