An earlier post about London on this blog was inspired by that city’s August 2011 riots.  In reporting the results of Hackney borough research by my former student Kiley Dowling I wondered if the urban improvements promised by London’s “Regeneration Games” would produce a more equitable intercultural city or simply create gentrified enclaves in a much bigger sea of economic deprivation.  The last great East London regeneration project—Canary Wharf—did not improve local quality of life nor narrow the gap between rich and poor as much as some had hoped.  Doubts that the Olympics could do any better for the borough of Newham and its neighbors were expressed by critics at the time of London’s 2005 Olympic bid (e.g., here). Beginning later this week I’ll be able to judge for myself the current state of post-Games regeneration—the progress and the potential—during  a two-week research trip to the English capital. 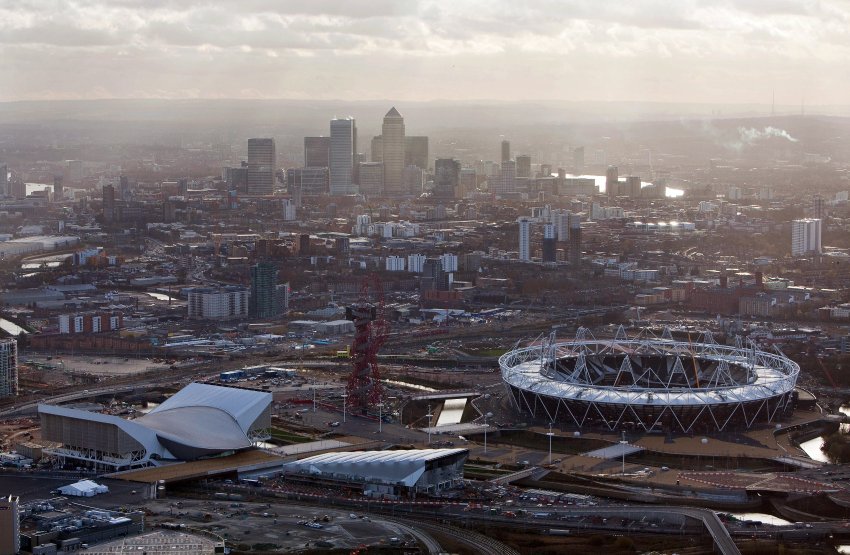 Olympic Park, with Canary Wharf in the Background (Spiegal Online)

London’s Olympic Games themselves have been hailed as a success by most reviewers.  But the jury is still out on whether improvements to the East End promised by the 2012 Olympics Legacy Plan will benefit long-time residents and newcomers alike.   Elements of the plan were contained in London’s 2005 Olympic bid, which is nicely contextualized in this scholarly article by John and Margaret Gold.  The bid promised sporting venues for citizens, public parkland, better quality housing, improved transportation facilities, and other infrastructural amenities. It also promised that the Games would be leveraged to celebrate the city’s ethnic diversity and create greater social inclusiveness.  According to Gold and Gold:

The bid strove hard to offer a rebranding of London away from being identified by its historic heritage to that of a diverse city with a vibrancy based on its multiculturalism. Much was made of London’s diverse ethnic identities and the multicultural character of the five ‘Olympic boroughs’ in the East End (Greenwich, Hackney, Newham, Tower Hamlets, Waltham Forest), where the main events would be housed.  The theme of the world coming to London to meet the world was  carefully fostered in marketing the notion of London 2012…

A London School of Economics (LSE) series on the 2012 Olympics is especially helpful in framing the East End’s regeneration challenge.  The cumulative message of the series so far is one of mixed blessings and open questions.  It notes that the Games were, in at least a few ways, a model of sustainability.  Wide pedestrian promenades and bridges linking Olympic venues will be retrofitted to human scale as the site is transformed into an urban park.  The park itself is a marvel that draws on English history and landscape design, celebrates native biodiversity, and incorporates absorbent flood control measures.  Several event structures will be shipped to other international sporting sites for reuse (e.g., the 2016 Rio de Janeiro Games), or will have their constituent parts recycled.  The remaining structures—like the Olympic Stadium and Aquatics Center—will be downsized for club football and public use.  Laura Mosca, writing in Metropolis Magazine, has a hard time squaring the concept of sustainability with the Olympic Games but she still admits that

London has introduced concepts of temporality in its buildings, unlike previous Olympic host cities. Most of the major sporting structures will decrease in size following the closing ceremonies, or transition into other programs and uses. For this, London should be applauded. They have stepped into the zone rarely taken by architects of impermanent place making. 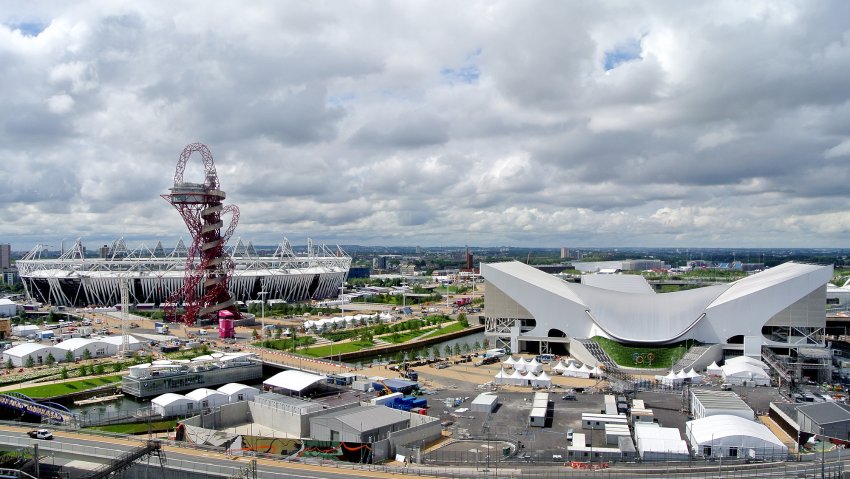 The extent to which local neighborhoods will benefit from other remaining infrastructure is another matter. Certainly, improved London Underground and Docklands Light Railway transportation services have better integrated the East End with the rest  of London.  Middle class people have been moving into the area and housing prices, at least in the boroughs surrounding Newham, have been increasing. But it’s a different story for long-time residents.  Olympic development has already displaced hundreds of people from their homes to places where rents are higher and neighborhood support networks are missing.  University College London’s bid for new satellite campus near the Olympic Park may doom the Carpenters Estate public housing complex and force additional displacement. There are questions about the availability and affordability of the 2,800 apartments that will be made public in the Olympic Village.  Economic times being what they are, there likely will be fewer affordable units than originally planned, and most of these will likely be priced beyond the means of Newham’s poorest residents. A new academy school planned for the site may draw the best and brightest students from surrounding areas and leave local kids on the outside looking in. Jobs for young people is another critical concern.  Olympic venue construction displaced 200 companies employing 5000 people. Most Olympic jobs didn’t go to local residents, and the post-Olympics job market remains thin. The LSE reports that the income gap between Newham and rest of London actually widened between 2006-2011.  Stratford is presently a tale of two economies: a new one exemplified by the upscale Westfield Shopping Centre and an old one rooted in the adjacent 1970s mall and its connecting, Starbucks-free High Street. 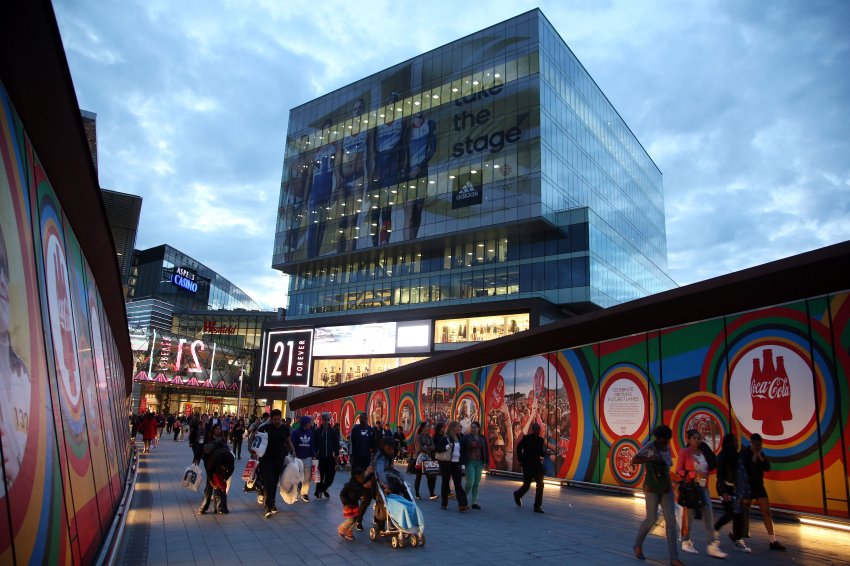 One of the more recent essays in the LSE series by Don Flynn is interesting in that it returns to the ethnic diversity and social inclusiveness theme of the original London Olympics bid.   Success in fostering an intercultural and inclusive East End is imperative because London is an important symbol of truly cosmopolitan urbanism in British and other “national imaginaries.”  Flynn writes:

The legacy question is, how do we build on these weeks of showing the world what a global community in one city can look like? Will we find voices in other parts of the UK which are prepared to resist the doomsters who predict only disaster coming from internationalism, and who can map out perspectives for their cities and regions which are also about greater involvement in the wider world?  Most of all, will the leaderships of all the political parties in Britain rise to the challenge and stop talking about immigration as a mistake that should not have been allowed to happen? If the voices in Parliament and in Whitehall’s corridors of power prepared to speak out on this issue become more numerous and more confident in their arguments, then that might prove to be the very best legacy we can hope for from the London Games 2012.

To which the lone commentator on Flynn’s essay (“Sue”) pointedly responds:

What makes you think it’s the politicians that are discussing this? It’s us, the displaced, those who feel as though we are strangers in our own country that are openly talking about it. Many of us, ethnically cleansed and driven from our homes in East London and other cities where our families have lived and worked for generations. We are the ones that have been forgotten. Immigration is fine if it’s controlled. It has not and is still not being controlled. It’s a shambles and has brought England to it’s knees and alienated the indigenous population. So stick that in your leftie, progressive pipe and smoke it. 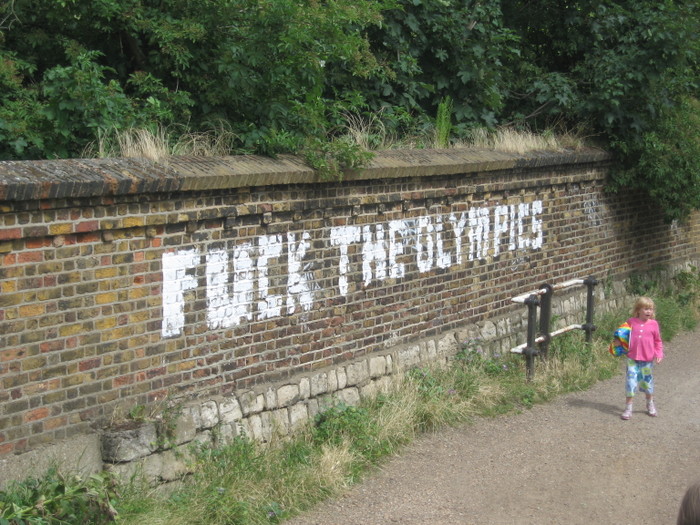 Clearly, along with the many open questions about East End regeneration there are many open wounds and simmering hostilities.  Nonetheless, there’s evidence that multiculturalism in the UK can work, and that it works best when native Britons support it.  Popular support clearly depends on many things, especially a more equitable distribution of political and economic resources.  Several LSE observers note that the open and flexible framework of streets in the Olympic area, along with other infrastructure, create the potential for coherent placemaking that can be interculturally integrative.  There are examples from other cities that illustrate what both the process and product of intercultural urban planning looks like. In London, the word from master planners and participating architects is that the new developments will connect with the old–including the East End’s “scruffy fringes”–using the urban fabric that’s already there and eschewing demolition.  Ideally this will be accomplished without losing the organic messiness that’s long been part of East London’s attraction.  In short, East London’s primary challenge is the same one that exists elsewhere.  Innovative, inclusive placemaking requires a system of checks and balances (and compromises) to ensure that increasing land values and in-migration do not push existing communities out; i.e., that market forces and gentrification don’t trump public housing and urban renewal.  Certainly, political and budgetary courage is also a requirement. Intercultural (East) London is a lovely “imaginary,” but it will take time and effort—and perhaps some new ideas about how materiality and sociability work together to create place—to make it a reality. 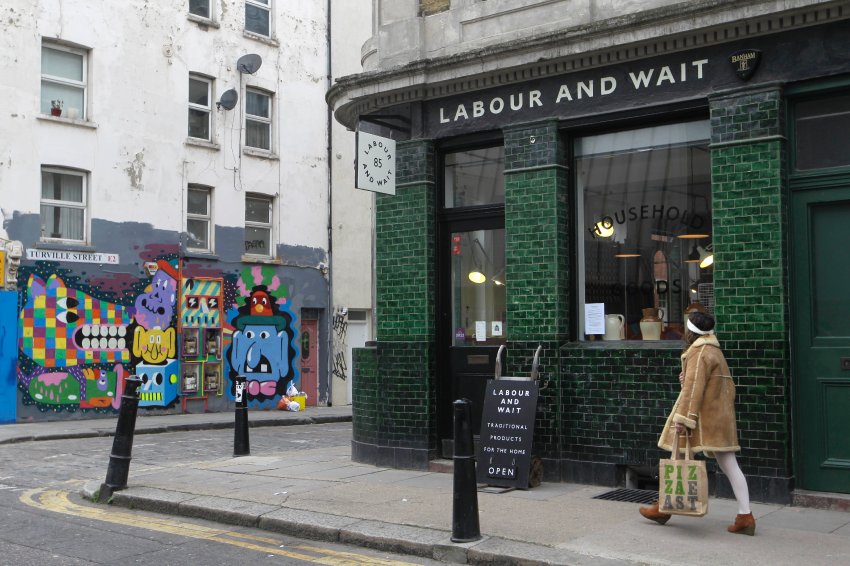