Archaeology and the Intercultural City

Last June’s Venice Seminar frequently prompted me to think about what the “deep time” perspectives of evolutionary psychology and archaeology can contribute to the conversation about intercultural place-making.  I’ve argued that Evolutionary Psychology might direct us to some cross-cultural common denominators of taste useful for shaping the form and aesthetics of the intercultural city.  This post looks at what the deep time perspective of Archaeology—a discipline  committed to exploring the range of variation in the way that people live across time and space—can contribute to the intercultural cities project.

The urban archaeologist Michael E. Smith, along with his colleagues in the School of Human Evolution and Social Change at Arizona State University, has already done a bunch of heavy lifting in this regard.  Michael’s scholarly publications emphasize the importance of taking a comparative perspective on the city as a way to better understand variation in urban form and the conditions and processes that produce urban prosperity, security, and resiliency.  His blog Wide Urban World broadcasts these concerns to a popular audience. Smith problematizes concepts like urban “sustainability” and considers whether sprawl, residential clustering, and other familiar characteristics of today’s cities are exclusively modern phenomena.  They aren’t.  Cities in antiquity are both similar to, and different from, those of today. Michael justifies the contemporary relevance of archaeological work as well as anyone else by invoking a quote from Winston Churchill: “The farther backward you can look, the farther forward you can see.” 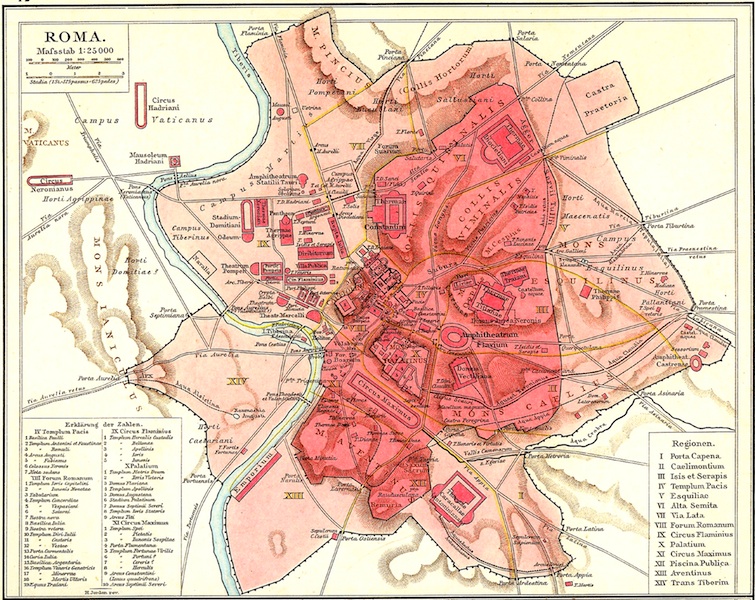 The particular question at the Venice seminar that got me thinking about archaeology’s relevance to intercultural place-making was whether anything short of the shared human misery produced by a flood, tsumani, earthquake (recently experienced by northern Italians) or other natural disaster is capable of bringing diverse groups of people together into a collaborative urban renewal project.  In his article “Civilization in Color: The Multicultural City in Three Millennia” Massachusetts Institute of Technology sociologist Xavier de Souza Briggs compellingly argues that our best historical examples of well-functioning pluralist cities are ancient Rome and medieval Córdoba.  Both were shaped by explicit commitments to cosmopolitan city-building. These commitments were driven, however, by autocratic rule.  Given autocracy’s political distastefulness to us today, are there any historical examples of diverse, intercultural cities that were developed on democratic or communitarian grounds? 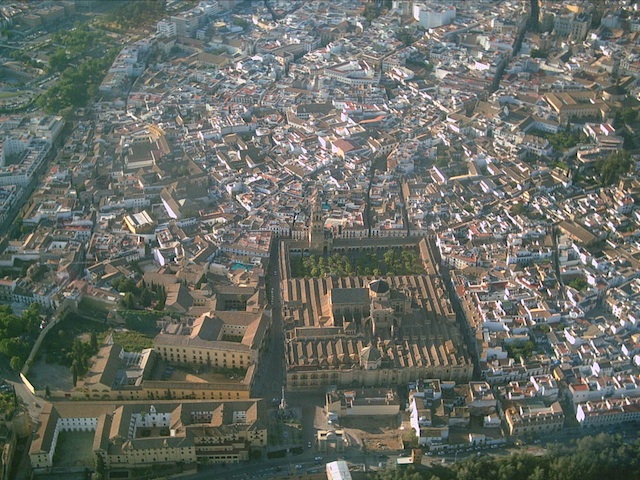 The examples that occurred to me in Venice come from Pre-Columbian North America.  In an earlier academic life I researched and wrote about the ancient cultures that occupied sites in the American Bottom and the San Juan Basin, specifically Cahokia and Chaco Canyon, respectively.These are American archaeology’s two best examples of Pre-Columbian urban (or at least near-urban, in the case of Chaco) development north of Mexico.  Interestingly, both cultures flourished around the time that Córdoba was enjoying its “Golden Century,” i.e., between AD 929-1031.  It’s always struck me that there was something in the air during this century that propelled cultures in North America and elsewhere towards long distance interactions and inspired local innovations in place-making, but that “something” is still rather elusive.

The social meaning of Cahokian and Chacoan archaeological patterns isn’t entirely clear. Archaeologists often deal with fragmentary data and, like all social scientists, use interpretive theory that’s been unconsciously shaped by all sorts of contemporary cultural biases, hopes, and desires.  Thus, there are several different reconstructions of what ancient Cahokia and Chaco were like.  In some models they are politically-centralized states run by kings who used terror (or at least the  threat of violence) to maintain social order. In other models they are communal undertakings based on shared, deeply controlling “Big Ideas” and forms of political power that are rather more fluid and tenuous.  But even scholars preferring the latter scenarios (like myself) recognize that both cultures were organizationally quite complex, perhaps of a kind unknown in history either before or after.  Certainly, all scholars would agree that power and ritual at both Cahokia and Chaco were intertwined in significant ways. 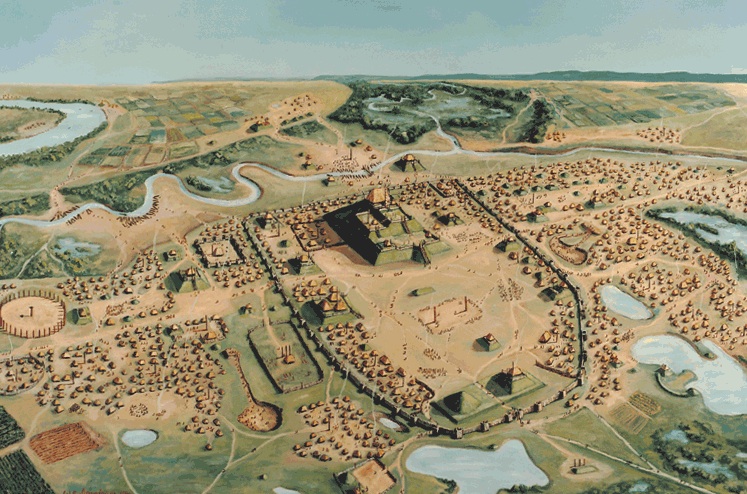 Reconstruction of Cahokia: Six square miles, 120 mounds, population at least 20,000 (and possibly more) at its height

The most interesting latest studies of both Cahokia and Chaco use empirical evidence to suggest that these phenomena–because of their geographical reach, which extended south to the  Valley of Mexico and contact with the Toltec Empire and other Mesoamerican cultures–were not so much distinct political entities as “pluralities” or “hybridities” characterized by great cultural diversity.  That is, they were multi-cultural “Third Spaces” (sensu Homi Bhabha) in which ethnic diversity was integrated by distinctive new practices and ideologies.  The precise content of these integrative Big Ideas is tough to determine archaeologically. However, it’s a good bet that they were rooted in animism and “world renewal” rituals.  More apparent is the social effects of these ideas.  Citizens of both Cahokia and Chaco successfully harnessed ethnic, linguistic, and other cultural diversities to make dramatic and unprecedented investments in place (e.g., monumental constructions like huge earthen mounds at Cahokia and over-engineered masonry “Great Houses” in Chaco, often arranged in spatial patterns that represented cosmological belief), long-distance trade networks and interaction spheres, and urban ways of living.  What’s personally gratifying for me is that these latest interpretations of Cahokia and Chaco emphasizing organized ethnic plurality are fully consistent with a description of Chaco I offered in American archaeology’s flagship journal American Antiquity exactly 15 years ago.  There, I interpreted Chaco as a particular form of community

…conceived in multiplicity and difference in an open social reality, and held together by a sense of community (a ‘being in common’ rather than a ‘common being’) that thrived on and celebrated social difference rather than subordinating difference to regulation and control. 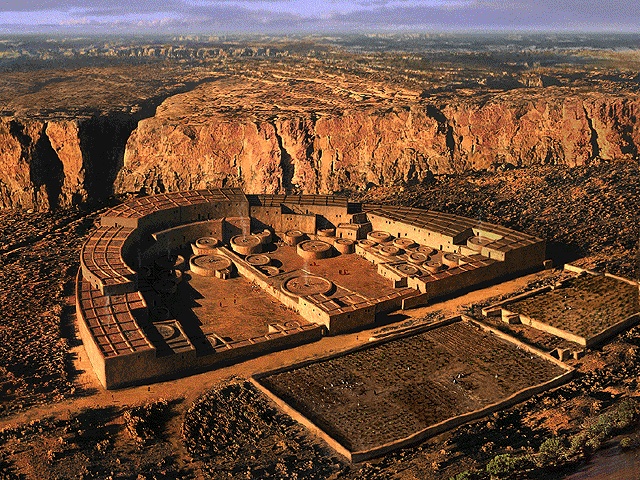 The current challenge to Cahokian and Chacoan archaeology is to discover the unifying ideas and commitments that promoted this “being in common” and its associated forms of spatial belonging.  What were the norms of ethnic co-existence?  How were they established? How did they encourage (or compel) what Briggs describes as the “cross-cutting loyalties” that bridge ethnic difference, promote collective action, and defuse social conflict?

Even if we eventually discover these norms of ethnic co-existence there’s no guarantee that Cahokian or Chacoan society and history will have any general lessons to teach us today (but see here for one particular formulation of the lessons taught by Chaco).  It’s also pretty unlikely that there are any Big Ideas available today capable of integrating the many diversities and complexities  that currently surround us. That is, we lack large-scale, inclusive civilizing projects of Roman or Córdoban character capable of generating pluralist local identities that effectively bridge ethnic and religious differences. Still, there could be something in the distinction (derived from Jean-Luc Nancy’s work on The Inoperative Community) between “being in common” and “common being” that can serve as a useful touchstone for theorizing the conditions and forms of spatial belonging that best serve the goals of the intercultural city. 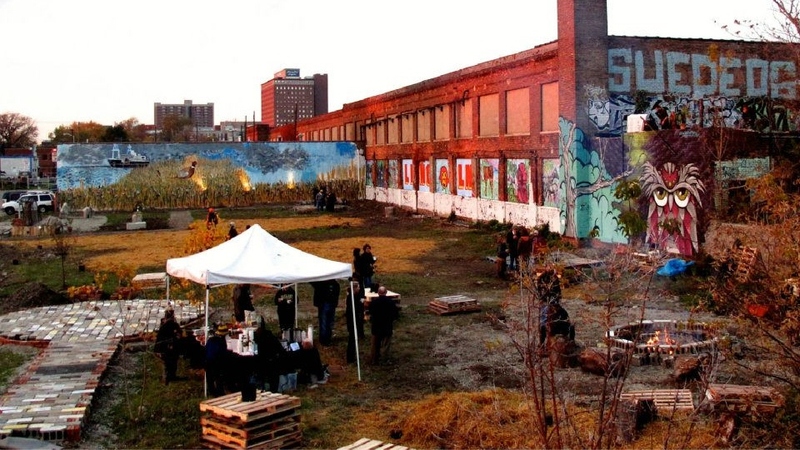 Certainly, archaeology tells us that at least a few ancient cities were very successful in harnessing diversity’s advantages.  Today, in the absence of a large-scale civilizing project to promote intercultural contact and pluralism, we can use little tactics of habitat to accomplish the same goals. Housing can be designed in ways that better integrate marginalized and disenfranchised groups into community.  Preserved historic buildings can be turned into low-income housing instead of upscale lofts.  The hated (at least within New Urbanist planning circles) surface parking lot can be strategically located to help promote and sustain informal urban economies that, more often than not, have a minority ethnic flavor.  We can recognize and defend an aesthetic right to the city.  We can better democratize access to public space, markets and other spaces of day-to-day exchange. A variety of strategies for reclaiming urban space can be found within Tactical and Everyday urbanism.  Other spatial tactics and strategies for harnessing diversity’s advantages likely await discovery in the ancient urban world.  Some of these tactics and strategies for accommodating diversity—at least given my experience watching what’s happening at 9th and Colorado here in Denver—won’t easily pass muster with urban planners, property developers, city councilors, neighborhood associations, and citizens without some considerable persuading.   However, such efforts seem crucial if the contemporary city is to bridge cultural diversity and difference as successfully as our best examples from antiquity.