Occupy, Public Space, and the ‘Crisis of Capitalism’

Last week Charlie Rose invited to his interview table the geographer David Harvey and the economist Richard Wolff.  At issue was the question of whether modern capitalism is in crisis. Embedded in the conversation are several topics relevant to the primary thrust of this blog, including the amount and quality of public space in the contemporary city and the contributions to public debate of the Occupy Wall Street movement.  Harvey notes the relative absence of public space for supporting debate about the complex problems that bedevil us, including the conditions that have put capitalism in crisis.  Wolff details some of the contributions of the Occupy movement (of which, in its Denver manifestation, we’ve been critical) to expanding—and creating new questions for—public  debate. Both are impressed by Occupy’s moving of the conversation about corporate corruption from the specific enterprise (like, say, Walmart) to the capitalist system generally.  And both are intrigued by the question of what the city would look like if the highest earners in a competitive corporate enterprise earned only three times as much as the lowest earners (as in the case of Mondragon), instead of five hundred times as much. The broadcast is here: 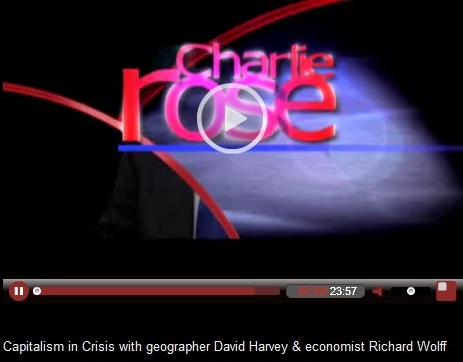 Viewers commenting on the interview at Rose’s website cover the waterfront from those who dismiss Harvey and Wolff as grumpy old men whom the world has bypassed, to those who applaud Rose for bringing two courageous and engaged public intellectuals together.  I lean toward the latter view.  David Harvey’s book Social Justice and The City, and especially his essay “Revolutionary and Counter Revolutionary Theory in Geography and the Problem of Ghetto Formation” inspired me to stay in graduate school when I was harboring serious thoughts about quitting.  Harvey’s work, along with Rick Wolff’s creative, anthropologically-informed brand of political economy (developed in collaboration with Stephen Resnick) were instrumental in opening up new ways to understand the economy of non-capitalist societies when it came time for me to write a dissertation about settlement pattern, town plan, and social change in ancient Zuni society of west-central New Mexico. [Full disclosure: Rick also served on my dissertation committee in 1987 when he was teaching at the University of Massachusetts]. Their ideas continue to challenge and inspire.