Evolutionary Psychology and the Intercultural City

As noted in a previous post, discussion at the recent Venice Seminar on Intercultural Place-Making prompted me several times to think about how studies of the evolved human mind, as well as studies of urban forms that existed in the epochs before written history, can be guides for improving city-building today.  I’ll look at evolutionary psychology here and urban archaeology in a future post.

Evolutionary studies of nature might not help us to understand everything better, but they might help us identify some “common denominators” of human taste that could benefit intercultural city-building.  That is, allow us to better design and construct places conducive to producing the “new forms of social and spatial belonging” that Venice Seminar participants seemed to agree is central to the intercultural cities project. 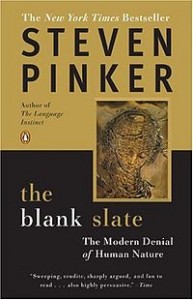 Most anthropologists (as well as a majority of humanists and social scientists) tend to dismiss the sciences of human nature, in particular sociobiology and its arguably more nuanced descendant, evolutionary psychology.  Critiques of these fields of inquiry abound.  I personally believe that anyone who accepts that Homo sapiens is an evolved species should take the sciences of human nature—and human evolutionary psychology—seriously.   (The vast majority of professional anthropologists and scientists at least take the concept of evolution seriously; nearly half of American citizens, however, don’t).  Steven Pinker is especially good at framing the possibilities and potential pay-offs of an evolutionary view, especially in his wonderful book The Blank Slate.   There he notes—ever so briefly—the sometimes disastrous consequences of modernism’s failure to consider human nature in its approach to architecture and urban planning. For Pinker:

…Authoritarian High Modernism [is] the conceit that planners could redesign society from the top down using ‘scientific’ principles. The architect Le Corbusier, for example, argued that urban planners should not be fettered by traditions and tastes, since they only perpetuated the overcrowded chaos of the cities of his day…He planned his cities around freeways, large buildings, and vast open plazas with no squares or crossroads…Homes were “machines for living,” free of archaic inefficiencies like gardens and ornamentation, and thus were efficiently packed together in large, rectangular housing projects…Le Corbusier was frustrated in his aspiration to flatten Paris, Buenos Aires, and Rio de Janeiro and rebuild them according to his scientific principles. But in the 1950s he was given carte blanche to design Chandigarh, the capital of the Punjab, and one of his disciples was given a clean tablecloth for Brasília, the capital of Brazil. Today, both cities are notorious as uninviting wastelands detested by the civil servants who live in them. Authoritarian High Modernism also led to the ‘urban renewal’ projects in many American cities during the 1960s that replaced vibrant neighborhoods with freeways, high-rises, and empty windswept plazas.” (pages 170-171).

For Pinker the modernist project reflects a minimalist conception of human nature.  It’s a project that omits human aesthetic and social needs. It fails to consider that these needs might be better satisfied by providing human-scaled and appropriately-ornamented buildings, and intimate public spaces where people can hang out in small groups of friends and family.   Nikos Salingaros has called Pinker’s insights to the attention of a wider audience.  Salingaros writes:

[Pinker’s argument] accuses architects, urbanists, and legislators for acting contrary to the biological nature of human beings. As such, it helps to solidify the arguments of anti-modernist critics such as Jane Jacobs, Christopher Alexander, and Léon Krier by providing them with a biological foundation… While Pinker’s book is not about architecture and urbanism, it does open the door to what is inevitable; namely, a scientific debate of what type of architecture is more in tune with biological precedent. By focusing on how the human mind reacts to form and environment, the investigation turns away from the imitation of nature, and complements those studies in an important fashion.

Charles Siegel has picked up this ball and run with it. He argues that, of all the competing urbanisms around today, New Urbanism is the one that’s most in tune with evolved human psychology.  This is because New Urbanism rests on three principles of a “timeless way of building” that best accommodate our innate predispositions. These principles include:

Siegel illustrates these principles here.  What he calls modernism and avant-gardism reject these principles and that’s why we find their buildings dehumanizing and even physically repellent where, for example, they induce dizziness and even nausea. For Siegel urban design codes should be form-based, like the one used at Seaside, Florida.  Such codes “create an urban fabric with the same combination of individuality and general consistency that we find in traditional cities and towns.” 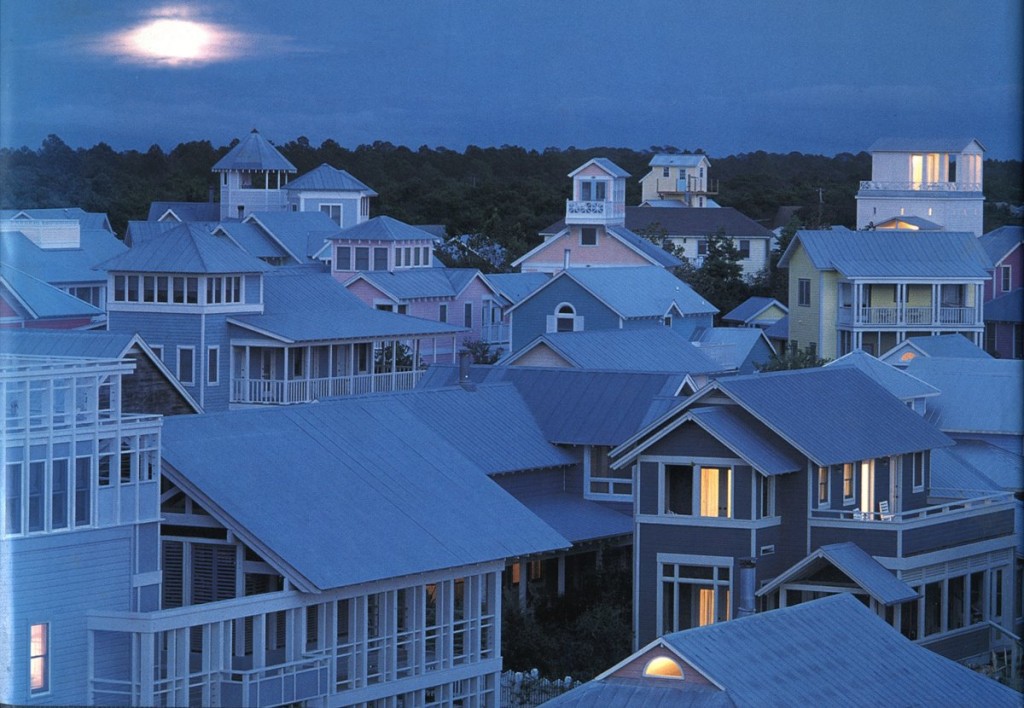 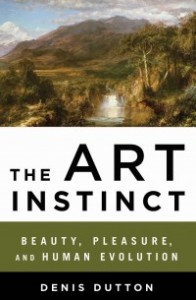 In his book The Art Instinct: Beauty, Pleasure, and Human Evolution, Denis Dutton has similarly worked to identify the features of natural landscapes that are favored cross-culturally as a function of our common evolved psychology.  Although it’s not Dutton’s primary concern, these features have implications for the design of city parks, gardens, and other built urban landscapes.  Drawing on a variety of cross-cultural studies of human artistic preferences (most notably Vitaly Komar and Alexander Melamid’s People’s Choice project) Dutton suggests that people everywhere prefer natural landscapes comprised of features that would have been desirable for our distant ancestors who adapted to, and evolved in, the broken forest/grassland savanna environments of East Africa.  (Komar and Melamid capture some of these common cross-cultural preferences in their series of “Most Wanted” landscape paintings).  It’s well-known by anthropologists that all of our original hominin ancestors depended for survival on social group life and the behavioral innovations allowed by our relatively larger and more complex primate brain.  As a consequence of having successfully adapted to this original savanna environment (that would have comprised, in part, what evolutionary psychologists call the environment of evolutionary adaptedness), humans today prefer the following: 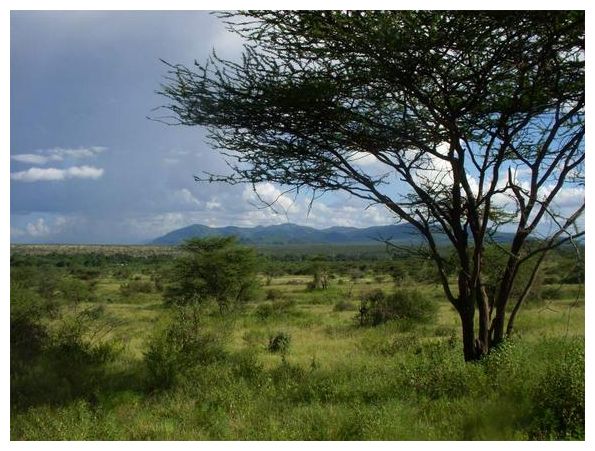 Much of this is commonsensical.  But Dutton summarizes work suggesting that humans everywhere also seem to prefer landscapes that contain some element of mystery and invite exploration. In other words, we like features that can excite our imagination and stimulate the big human brain that, at the end of the day, was perhaps the most important key to Homo sapiens’ evolutionary success.  Creating such features presents a bit more of a challenge to urban planners and architects.

I like Dutton’s argument. I’m not persuaded so much by Siegel’s.  Modernist high rises and avant-garde, deconstructivist buildings can have a certain appeal. They can even resonate with evolved sensibilities if they serve as useful focal points for locating ourselves in space and allow more confident urban navigation (although some modernist buildings, like the Tour Montparnasse in Paris critiqued by Siegel, perhaps accomplish this function a bit too well).  Organically-evolved urban fabrics that are palimpsests of different epochs of city-making (like London) also can delight the senses. They invite exploration and contain, at least for some, elements of mystery and the constant, energizing possibility that something surprising will be found just around the next corner (cf. the predictable symmetry of a gridded city like New York).  Perhaps most importantly, we don’t know very much about the traditional or vernacular built forms that humans created during most of our history.  We have written or relatively unambiguous visual records of urban development going back only 9000 years, which is about 5% of the time that Homo sapiens has been on earth. Thus, there’s much still to learn from archaeology about architectural and urban form as it was expressed in both deep time and on a global spatial scale. In short, it’s probably premature to declare New Urbanism’s particular neo-traditional forms as the ones that best resonate with a common human nature.

I’m not sure that there’s anything in evolutionary psychology or other sciences of human nature that can specifically inform intercultural approaches to place-making and city-building. But I think we’re best served by being open to the possibilities (for another sympathetic view, see here).  Whatever one thinks of the two studies described above, Salingaros is right to conclude that:

We need further research to reveal the biological basis for architecture [and, I would add, urban design]. That is a monumental task, yet an important first step has now been made. When the job is finally accomplished, and we understand how architecture depends on the structure of our own mind, we will be in a better position to tie together many of today’s non-mainstream movements in architecture and urbanism.