I personally don’t think that it is. However, Denver Post Fine Arts Critic Ray Mark Rinaldi gives the opposite impression to thousands of readers via a recent opinion piece called “Did Diversity Miss the Train in Union Station Architecture?” The Union Station in question is Denver’s newly refurbished central rail hub, originally built in 1881 with some alterations in the 1890s. Mr. Rinaldi suggests that the station’s “neo-classical mix of styles” is off-putting to ethnic minorities, and hence discourages them from using this most central of Denver’s public places. Reader reaction was swift and abundant, numbering over 300 online posts. Respondents overwhelmingly condemn Mr. Rinaldi’s argument as uninformed, illogical, ridiculous, bizarre, crazy, idiotic, asinine, moronic, and in itself divisive and racist. Mr. Rinaldi himself is diagnosed as suffering from liberal stupidity, liberal self-loathing, liberal educational indoctrination, liberal superiority syndrome, and several other mental disorders associated with liberalism. Some readers liken the piece to a parody from The Onion. 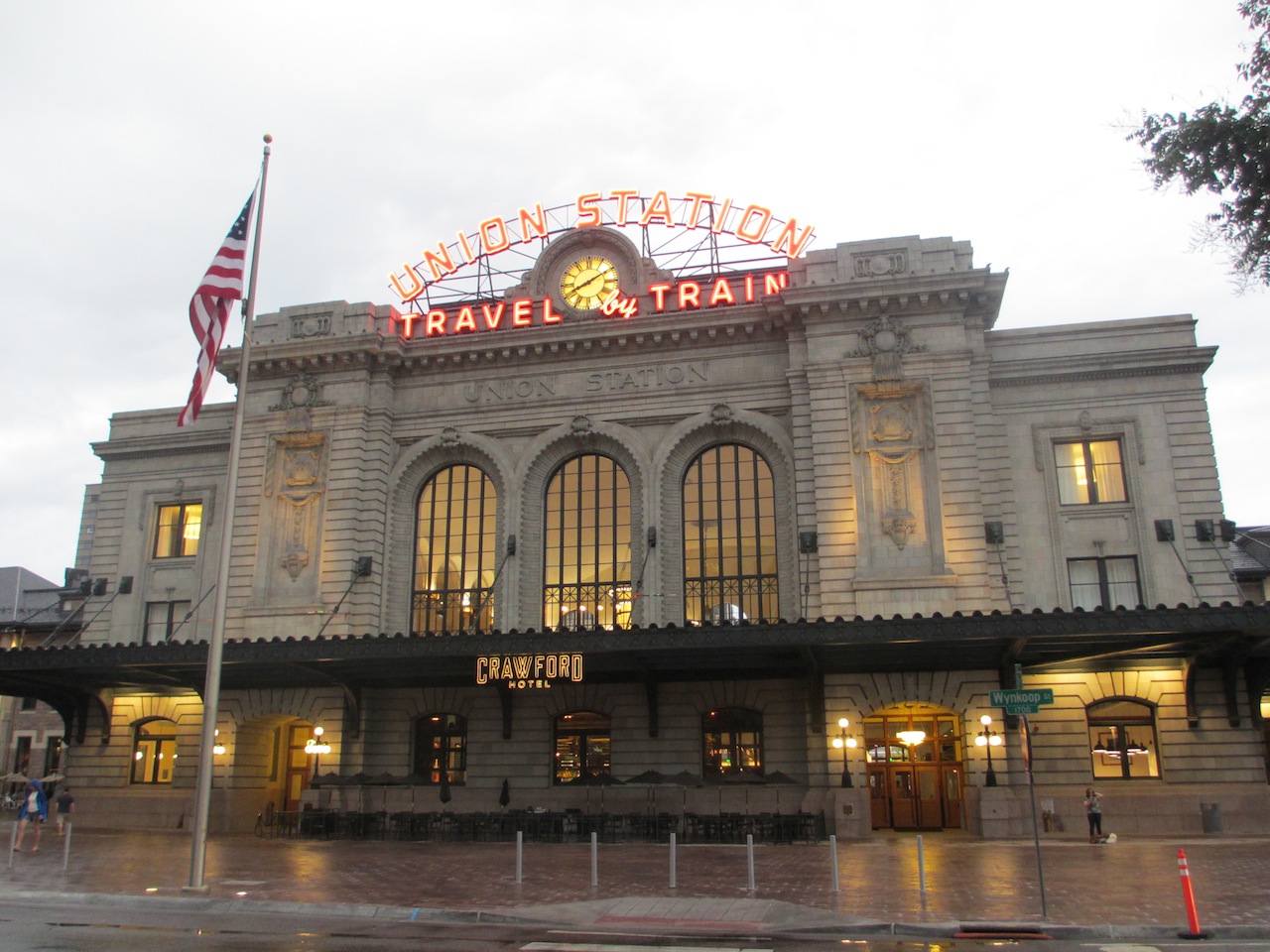 Assuming that Mr. Rinaldi’s article is on the level, his particular critique of Union Station redevelopment, combined with the apoplectic reactions of his readers, derails a potentially important conversation about the extent to which urban built environments are meaningfully constituted and interpreted by citizens, and the degree to which cultural diversity should matter in urban placemaking. More on this below, but first some additional background:

Denver’s Union Station is a mash-up of Romanesque, Classical Revival, and Beaux-Arts architectural styles. Located at the end of a terminating vista in Lower Downtown, the building is a marvel to behold. Mr. Rinaldi spent some time one weekend counting patrons and discovered that the user population for the station’s bars, restaurants, and other amenities is overwhelmingly white. This should come as no surprise for veteran observers of Denver placemaking. Upscale development rules in this part of the city, aided and abetted by the Downtown Denver Partnership’s interest in attracting Millennials. Mr. Rinaldi is certainly right that Union Station is “programmed” for people with money. And although Denver has a “growing middle class of minorities,” including “plenty of blacks and Latinos” who can afford to go there, Mr. Rinaldi goes a bit further to speculate that the station’s architectural renovation repels this demographic. The building’s “symmetry, arched windows, and ornate cornice and stacked stone walls” evoke European colonial empires fueled by slave labor. The rewired gilded chandeliers and polished marble symbolize an Old World that was elitist and exclusive. The whole scene harkens back to an early 20th century America rooted in ethnic segregation and class exploitation.

Mr. Rinaldi notes that there’s nothing in the station’s update that “nods” to an increasingly diverse and multicultural present. For example, there are

…no interior walls in the bright colors of Mexico, no Asian simplicity in the remix. There are no giant sculptures by African-American artists bonused into the lobby, no murals on the basement walls.

There’s also no explicit nod to Native American (specifically, Cheyenne and Arapaho) people and cultures on whose ancestral land the station sits and whose ancestors were brutally displaced to clear the way for railroads in the West. Mr. Rinaldi doesn’t mention that particular omission, but he continues with this: 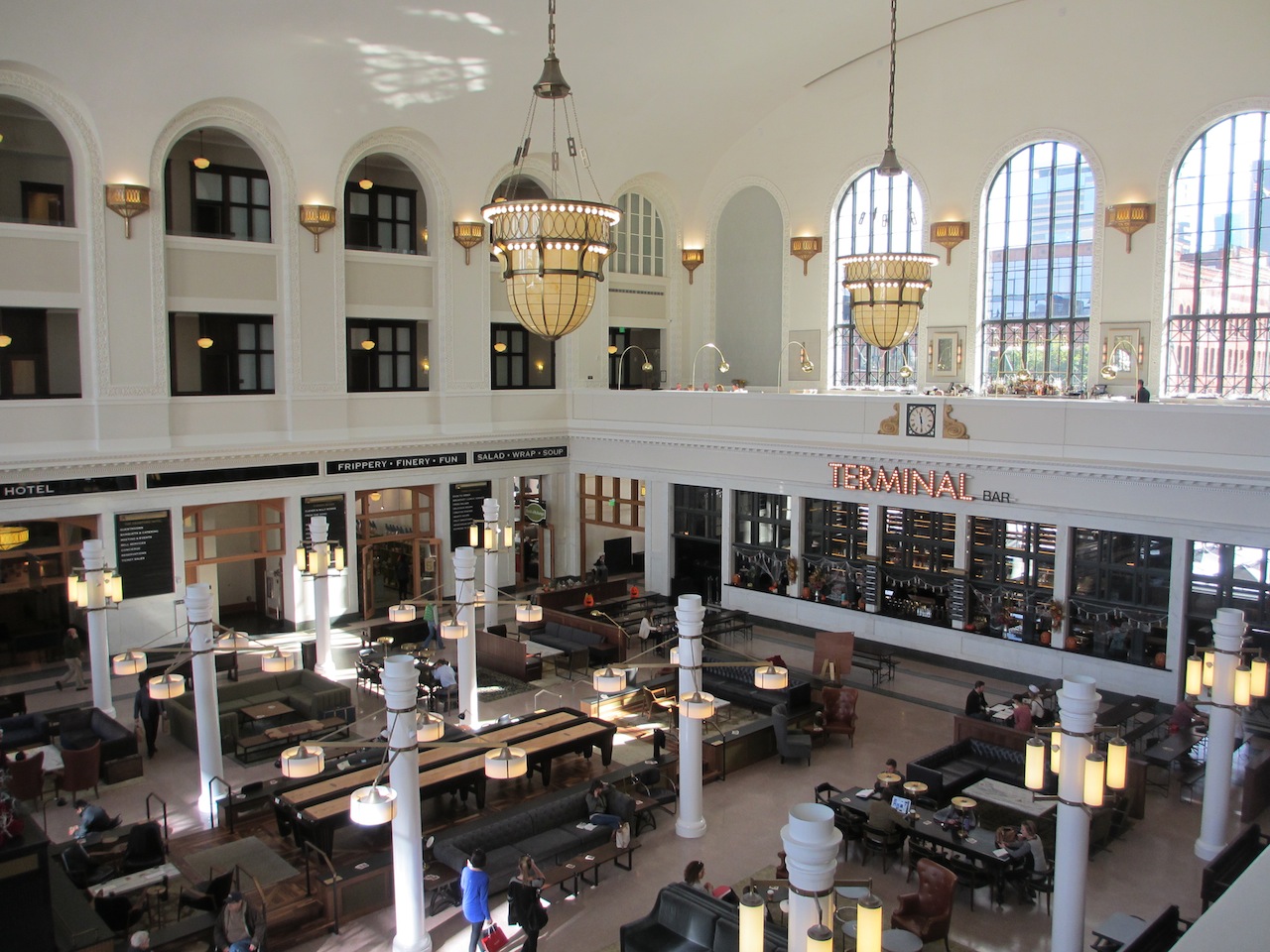 Mr. Rinaldi rightly notes that there are many choices that the station’s owner, the Denver Regional Transportation District (RTD), could have made in rehabbing and programming the venue. He laments that none of the choices respect RTD’s diverse ridership, which is largely minority-based. He suggests that other choices—like a recreational facility, playground, day-care center, farmer’s market, cultural facility (e.g., museum), and some affordable dining options—might have made the place more appealing to a broader demographic. Mr. Rinaldi concludes with a couple of dramatic rhetorical flourishes: RTD has “created a monster of separation” that has “defined us narrowly, darkly, negligently.”

To his credit Mr. Rinaldi recognizes that this is a “dangerous” discussion. He acknowledges the risks associated with racially categorizing people based on skin color (coincidently, the subject of a special exhibit now showing at Denver’s History Colorado Center). If Mr. Rinaldi was looking to enter dangerous territory he certainly succeeded, as evidenced by the hundreds of overwhelmingly negative online responses to his column. He clearly struck a nerve. Interestingly, the 13 reader responses published as letters in two different print editions of the Denver Post (see here and here) are, in stark contrast to the online reactions, much more balanced in their evaluation. It seems as if Post editors were intentionally looking to reclaim and reset a potentially useful conversation that was never established online. The published letters are evenly split between six people who excoriate Rinaldi for his crude stereotypes about culture and his cluelessness about the purpose of historic preservation (e.g., it should be “authentic” and faithful to original construction), and seven people who compliment him for provoking thought or agree that the station’s renovation is a missed opportunity to create an inclusive, energized public space in Denver’s Lower Downtown.

I’m inclined to accentuate the positive. Mr. Rinaldi’s piece is certainly clumsy in several regards, e.g., dropping ethnically themed restaurants into a public space does not an intercultural city make. His rhetoric is a tad overheated in places. His overall framing of the key issues with Union Station development could have been better. Still, I admire the courage it took to write something that makes such an inviting target for the trolls and troglodytes among us. As mentioned at the top of this post, at the very least Mr. Rinaldi challenges us to think about the meanings that public buildings and places have for people of different cultural backgrounds and life experiences. I would add public parks and other designed landscapes to the mix, as well as historic monuments and memorials. Humans are, as any anthropologist will tell you, meaning-making and meaning-detecting animals. We read visual cues of inclusivity and exclusivity in all of our cultural products. Even the most seemingly benign design choice can be loaded with positive or negative associations depending on the personal background and lived experience of citizens. We don’t need white people to point this out. Even non-white people, among them distinguished architects and planners, will tell you as much (e.g., see here and here). The planning and design stakes are especially high when it comes to urban places that are intended to be public. If, as some researchers suggest, there’s a correlation between racial equity and overall urban prosperity (for a sampling of scholarly views, see here), then it’s certainly reasonable to worry about racial inequities in access to, and use of, public space. The sooner that planners, developers, architects, and builders of all ethnic backgrounds realize this and achieve—as one Denver Post letter writer enlightened by Mr. Rinaldi’s piece put it—a “diversity awareness,” then the better our urban built environments are likely to be.

This essay was originally published at Planetizen. It was re-posted from here to Sustainable Cities Collective.