There’s an “equity deficit” in our thinking about urban sustainability.  Mainstream green theory is long on environmental justice, but much shorter on social justice.  Sustainable development agendas largely serve middle-to-upper income populations at the expense of lower income people of color, immigrants, and refugees. 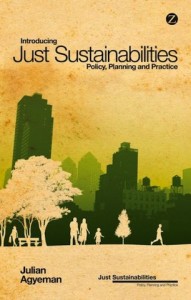 These are some of the basic claims that anchor Julian Agyeman’s terrific new book, Introducing Just Sustainabilities: Policy, Planning, and Practice.  Agyeman is Professor and Chair of the Department of Urban and Environmental Policy and Planning at Tufts University.  He writes an excellent blog called Just Sustainabilities. Agyeman speaks of sustainability in the plural because he believes—reasonably so—that there can be no universal prescription for sustainable urban practice.  Rather, policy and planning must be tuned to the increasing ethnic and class diversity of urban areas, or what others have called “cities of difference.”

The book is efficiently and cogently organized around three key themes, with a chapter dedicated to each: (1) Food, (2) Space and Place, and (3) Culture.  Agyeman suggests that each theme is under-theorized and under-researched as an aspect of Just Sustainabilities.  He does a masterful job synthesizing recent literature and case studies that relate to each theme, and adds original material that enriches our thinking.  There are many takeaways from this book. I focus here on just a few cautionary tales from each chapter that speak to equity deficits and illustrate how even well-intentioned efforts to plan and build for urban sustainability can have significant unintended consequences.

For Agyeman, the equity deficit in the “locavore” food agenda—one that emphasizes local and organic foods, farmer’s markets, and the desirability of community gardens—is that it doesn’t yield affordable, healthy, and culturally-appropriate food for low income populations.  The local is always heterogeneous, riven by power (and other) differences.  Thus, we err in thinking that community gardens in “food deserts” will be welcomed by everyone. Agyeman usefully considers the cultural symbolism of such initiatives. He suggests  that community gardens or “urban farms” can remind non-white citizens of the oppression their ancestors experienced under plantation and share-cropping systems. Alternatively, what’s really desired by many inhabitants of food deserts is the same sort of basic, full service grocery store that’s available to the inhabitants of food oases.  Agyeman channels Branden Born and Mark Purcell’s notion of the “local trap,” the assumption that the local is inherently good. He reaffirms their conclusion that the local food movement confuses ends (a more sustainable and socially just food system) with means (a system of localized food production and consumption). In so doing it fails to adequately serve minority and low income populations. 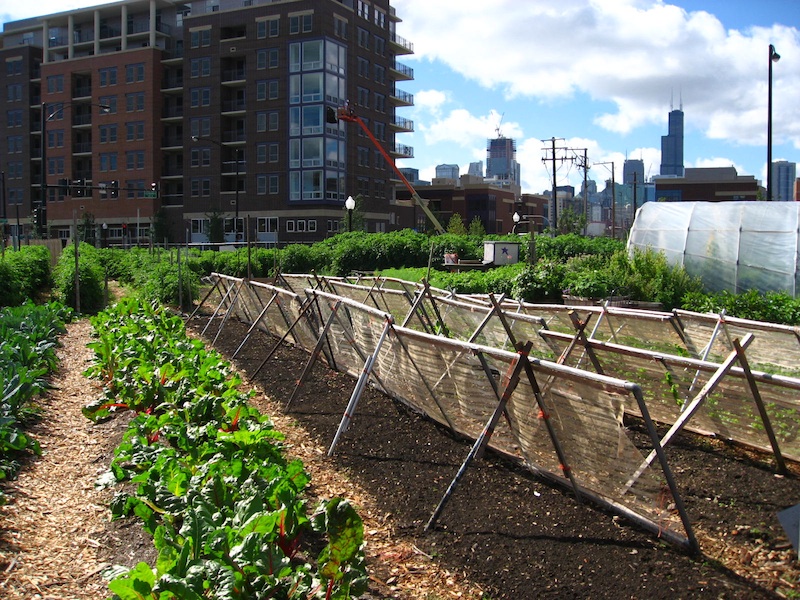 Mainstream placemaking can produce an equally compelling equity deficit.  The “complete streets” and “transit oriented development” (TOD) movements are geared to middle class visions, values, and narratives. They especially resonate with the much-coveted “Millennial” demographic. However, these agendas can signal something very different to people of color.  Newly established bike lanes and pedestrian zones can breed resentment when biking and walking—often the only available transportation options for low income people—become fashionable for people of greater means.  More importantly, bike lanes and pedestrian zones can increase anxiety because they often portend gentrification and displacement.  In reading Agyeman I was reminded of citizen comments about the local light rail line that emerged from a Better Block project in the historically black Five Points neighborhood of Denver. The Welton Street light rail line connects Five Points to the rest of the city and, to that extent, is welcomed by many residents. For others, however, it creates an internal boundary that must be carefully navigated in order to access a public park. That is, the rail line is viewed by some as “gating by other means.”  The specter of social exclusion is also raised by New Urbanist infill developments designed to pedestrianize streets by concealing or eliminating  surface parking lots.  This effectively eliminates spaces where “informal economies” can develop; economies that—by and large—benefit minority populations. Agyeman describes various bottom-up and top-down place-making initiatives in cities like Boston and Bogota that are more congenial to the needs of urban minorities and underclasses, thereby exemplifying “shared narratives of equity and justice.” 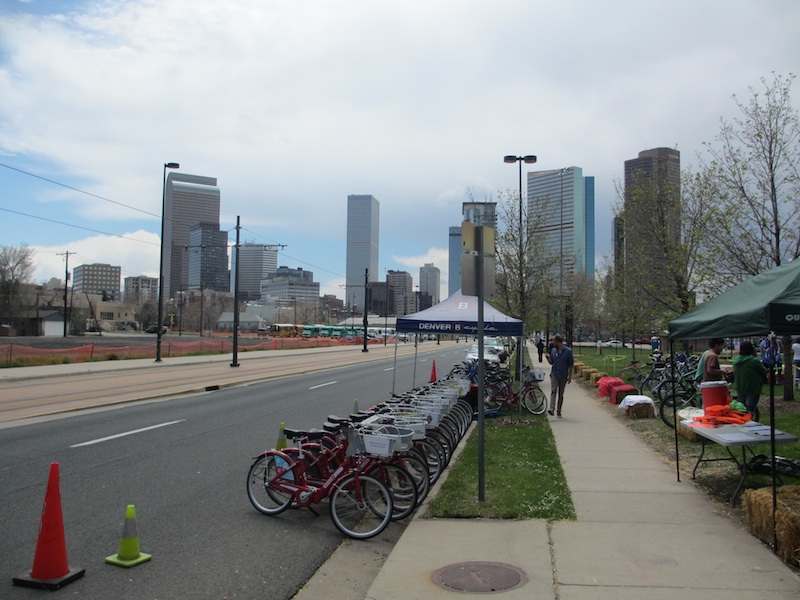 Agyeman offers a framework for thinking about culture from the standpoint of difference rather than diversity, and interculturalism rather than multiculturalism.  The concept of difference is the more expansive one, going beyond race and gender to include culture, class, religion, age, dis/ability, and sexual preference. It has been put to nuanced and provocative use by a number of urban thinkers. Interculturalism, for its part, goes beyond respect and tolerance for cultural differences to the active promotion of cultural interaction, cross-fertilization, and hybridization.  Agyeman notes the leadership of European Intercultural Cities Programme activists in promoting intercultural planning.  That these folks are ahead of the curve is evidenced by what I witnessed firsthand as a participant in the 2012 Venice Seminar on Intercultural Placemaking.  Urban parks—to take just one example of a public space whose planning can benefit from an intercultural perspective—create and reproduce equity deficits if designed and maintained without attention to social difference.  Agyeman summarizes how different cultures and ethnic groups, as well as ethnic sub-cultures, use parks differently. For example, they differ in terms of user group size, activity preferences, and inclinations to modify space to fit particular needs.  This section of the book nicely reinforces and complements Setha Low and colleagues’ wonderful work demonstrating that people easily read cues of inclusivity and exclusivity in urban landscapes; e.g., they will avoid landscapes where their group’s history is absent or erased, or where available facilities and diversions have limited appeal.  Taken together, Agyeman and Low offer a nice set of recommendations to make parks (and, perhaps, other public spaces) more welcoming of both inter- and intra-cultural differences.  These include giving more thoughtful attention to local histories, cultural symbols, accessibility, spatial adequacy, amenities, rules and regulations, architectural details, and even place and street names. 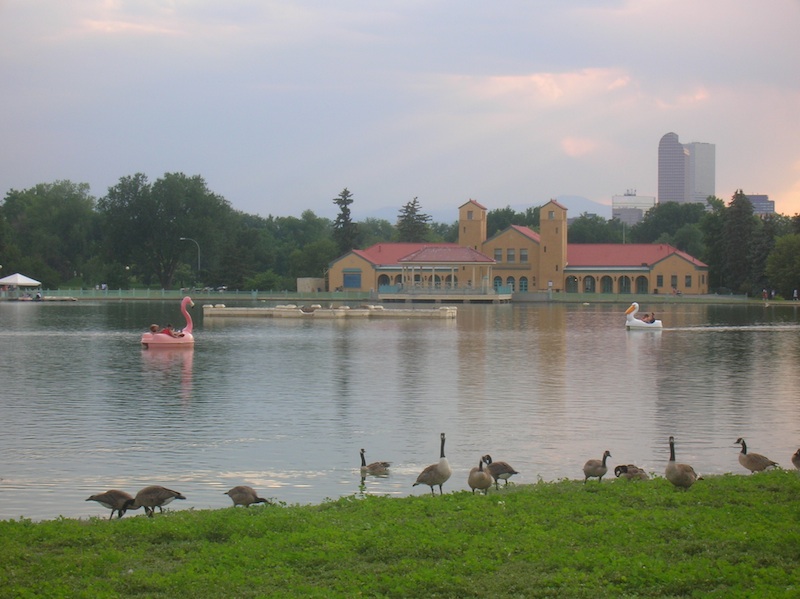 Achieving urban places conducive to cultural interaction and cross-fertilization depends, for Agyeman, on changes that are transformational and not simply reformist.  The urban planning and design professions must be transformed in ways that not only put Just Sustainabilities on their agenda but also diversify the ranks of practitioners.  Likewise, we need to develop more innovative methods and strategies for soliciting broad-based citizen input about sustainable development options. Throughout the book I was reminded of David Harvey’s famous essay about another kind of “trap”, the communitarian trap.  The communitarian trap assumes that neighborhoods are intrinsic and equivalent to “community.”  Harvey shows how deployment of the concept of “community” can effectively marginalize and silence resident minority and low income people, especially those lacking the time to participate in public meetings with developers and planners and/or the technological means to engage in conversations with their neighbors on social media (again, this is nicely illustrated by development debates here in Denver).  Agyeman and others (e.g., Talja Blokland) effectively substantiate Harvey’s insight by showing how a dominant picture of community is defined by the historical narratives that residents tell about a place, and that this picture can be selective, partial, and exclusionary.

In short, there’s lots to think about if we want to build cities that are culturally-inclusive and sustainable in the most comprehensive sense of that term. Julian Agyeman brings great passion, intelligence, and imagination to the task, and nicely primes the pump for the rest of us.