With the ending of the Walmart War at 9th and Colorado the main players are back at the drawing board.  Mayor Hancock, developer Jeff Fuqua, City Councilwoman Jeanne Robb and others have their say in this press release from the Mayor’s office, as well as in this story from the Denver Business Journal.  According to a Denver Post report:

After Walmart exited, Hancock convened all the parties — CU, Fuqua, City Council members, city staff and the development authority — to come up with another plan, [the Mayor’s Chief of Staff Janice] Sinden said. “Quite frankly, it was to say, ‘We’re going to do this right, not fast,’ ” she said. “And we’re going to really ensure that this is something the community is incredibly proud of. And that is going to take some time. And he put a lot of responsibility on the developer to reach back out into the retail community and come up with options.”

What the developer has come up with as an alternative anchor tenant is the well-known Kroger/King Soopers chain of grocery stores.  The particular kind of store that will anchor the site is still being discussed, but according to the Post:

…one option being explored is a Fresh Fare store — one of Kroger’s new-style stores that have upscale meats and seafood, gourmet cheeses and natural and organic foods, as well as chef-prepared meals to take home, besides the usual array of grocery items.  “That’s what we are advocating for, as upscale a market center as we can possibly secure in that community,” Sinden said… 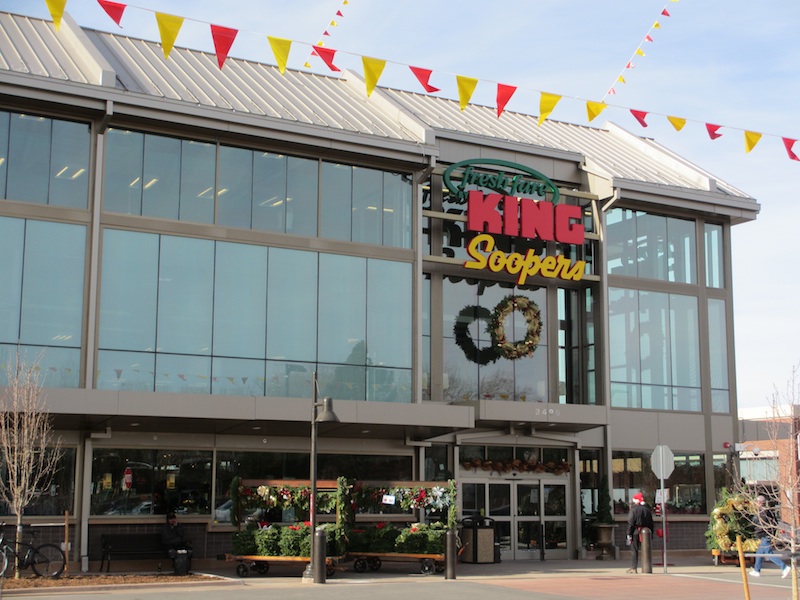 “The grocery store is fine. It’s maybe not exciting, but it’s definitely fine…What we need to work on is mixed uses. We wouldn’t get that with the previous tenant.”

I’m not sure why having Walmart as an anchor tenant would have precluded mixed use.  The potential for adding more “rooftops,” to use Councilwoman Robb’s words, was always there. Walmart certainly would have brought more merchandise and price variety to the mix.  But that issue aside, there’s certainly more talk today about including office space, senior housing, affordable housing, and even a hotel.

Citizen responses to the prospect of having King Soopers as an anchor tenant have run the gamut from “Anything is better than Walmart” to “Kroger is just as bad as Walmart.”  There’s widespread relief that Walmart is out of the mix, but also a palpable lack of excitement about the substitute.  One of the more thoughtful comments on the Post story comes from “RB”:

I don’t like the idea of a grocery store — we already have a Whole Foods, a nice Safeway, and Marczyk’s in our neighborhood, and a King Soopers is of a lower quality than all of these.  I’m not familiar with Fresh Fare, but it would seem to duplicate the WF and Marcyzk’s at least somewhat.   The problem with a grocery store is that it requires a lot of surface parking, which is exactly what we DON’T want at the 9th/Colorado site. We want a dense urban streetscape, not a suburban-type auto-oriented development with a sea of surface parking. If they can place all of the parking into underground structures of some type, or simply have a very limited amount of parking …that would be more acceptable. But the neighborhood will fight any development proposal that isn’t high density and that includes surface parking lots that are visible from the major arterial streets surrounding the site. 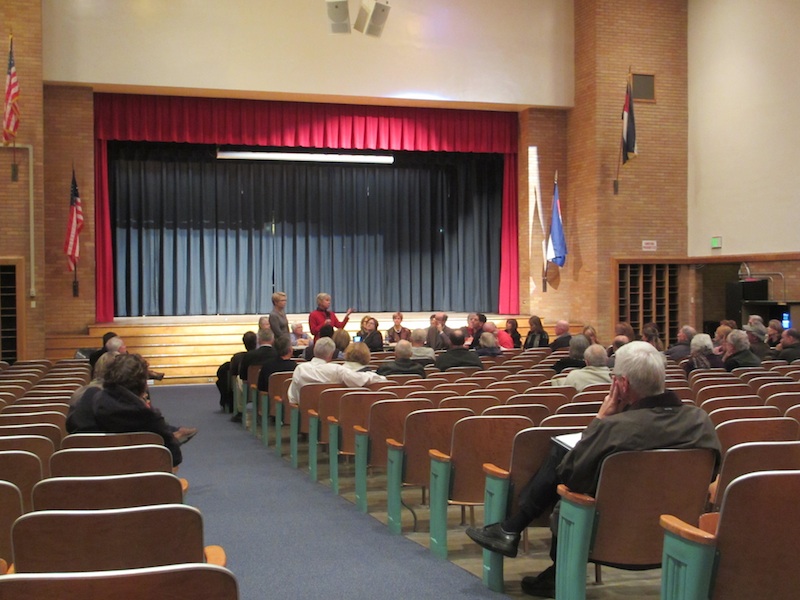 If “RB” is right that the neighbors don’t want surface parking then they’re in for some disappointment.  As disclosed at last week’s Colorado Boulevard Healthcare District (CBHD) board meeting—and as anticipated by RB—King Soopers doesn’t need underground parking. So, that feature appears to be off the table (Walmart, on the other hand, planned for it).  Interestingly (but unsurprisingly), neighborhood opposition to surface parking apparently doesn’t extend to the Trader Joe’s store that’s committed to moving in at the corner of 8th and Colorado, just across the street.   Last week’s CBHD meeting also disclosed that Trader Joe’s will not only have surface parking but also a surface lot that’s bigger than what they anticipate needing.  And apparently that’s just fine with the neighbors who were in attendance because there was no noticeable outcry. 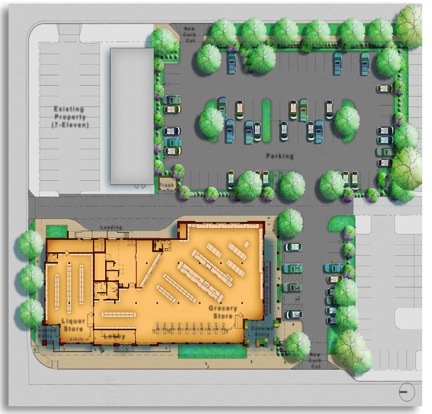 Haunting all of these discussions is a concern about whether the development will have any “sense of place.”  Citizens are of multiple minds about placemaking.  Some want a place that says “local”—as in a majority of local Colorado retailers.  Some want a place that says “upscale,” in order to attract a particular kind of crowd.  Some want a place that the local neighborhoods can “own.”  Some want green space. It’s not clear what any of this means from the standpoint of urban design.  On her Facebook page City Council President Mary Beth Susman says that there’s “more of a chance of having a sense of place” now that Walmart has been vanquished.  But just like I’m skeptical of Councilwoman Robb’s claim that Walmart’s presence somehow precluded mixed use, I’m not sure why King Soopers would facilitate placemaking any better than Walmart.  Especially since grocery stores generate less tax revenue—and thus fewer placemaking resources—than other anchor tenants.  Folks at the  anti-Walmart website that’s been renamed as Do It Right at 9th say that King Soopers is a  step in the right direction, but that has more to do with liberal politics rather than any coherent placemaking vision.  Except for offering up a few boilerplate generalities the website offers no real substance about what’s “right” at 9th.

In multiple posts on this blog we’ve advocated for placemaking that (1) reflects–in both substance and architectural style—the site’s history as a health sciences center and (2) welcomes the burgeoning ethnic diversity of urban cores. The first of these considerations prescribes—drawing on “healthy city” and “heart of the city” metaphors—an identity-establishing signature building, the adaptive reuse of a few more significant existing structures, full enclosure of the central Quadrangle to create a more intimate and pedestrian-friendly public space, better (and safer) pedestrian and bicycle connections between the site and the playing fields of Congress Park, and a Denver B-cycle station. The “street gyms” used in Santiago, Chile to prompt physical activity and enliven public space would also be nice amenities, especially for kids and moms.  The second consideration prescribes—drawing on intercultural city ideals—at least a few value shopping alternatives, a critical mass of “hard” public space (including parking lots) where “informal economies” can be encouraged and supported, and housing to accommodate not only multi-generational “Next Gen” families but also a broader swath of cultural and economic diversity.  At the CBHD meeting Council President Susman noted that she wants to see more “pocketbooks” on the site, referring to prospective residents. I trust she understands that not all pocketbooks are of the same size, quality, and color.

Twenty twelve began with preliminary discussion of 9th and Colorado design guidelines and citizen concerns about what the development will “feel” like.  The year ends with the same guidelines in place but everything else in flux.  Thankfully, there are lots of ideas and examples percolating through the urban blogs and scholarly literature that can serve as useful fodder for imagining a great, context-sensitive place.  Here’s hoping that 2013 will bring broader, better-informed, and more creative thinking about placemaking at 9th and Colorado and how the enterprise might serve the entire city.