The news came in late last week: Denver’s Civic Center Park has been added to the list of National Historic Landmarks (NHL). It joins 22 other NHL sites in Colorado, of which the Ludlow Tent Colony is the closest to my heart because I was among the group of scholars and  citizens that helped get it listed.  The news appeared just after students in my Culture and The City class had turned in their analysis of the park’s monuments and its urban context.  I summarized the analysis done by last year’s class in a previous post.   The one commenter on that post offered the following observation about the students’ work:

Sadly I find the students’ responses to the monuments, specifically their apparent need to view them solely in terms of class, race, gender, etc., to be predictable and formulaic, perhaps a result of the prevailing “social reconditioning’ in academia today. It smacks of indoctrination rather than education when so many recite the creed of victimology.   Notwithstanding, I was encouraged that some students responded on a more visceral, even intuitive level, as when they were asked about the mismatched architecture surrounding the park. They appeared to recognize the disharmonious additions by Libeskind et all and call it like it is. Perhaps Camillo Sitte is getting through. If so, I look forward to the work of this emerging crop of students who might place an architecture of beauty above one of shock value. (Danny Libeskind … are you listening?)

I didn’t respond to this comment when it was originally posted because I thought it would be better to have students in the course consider it without any additional “social reconditioning” from me. None took me up on the offer. Either they were afraid to do so lest they get crosswise with their brainwashin’ professor, or they didn’t think the comment was worth bothering with because it suggests that they are, at the same time, both dupes and free-thinkers. 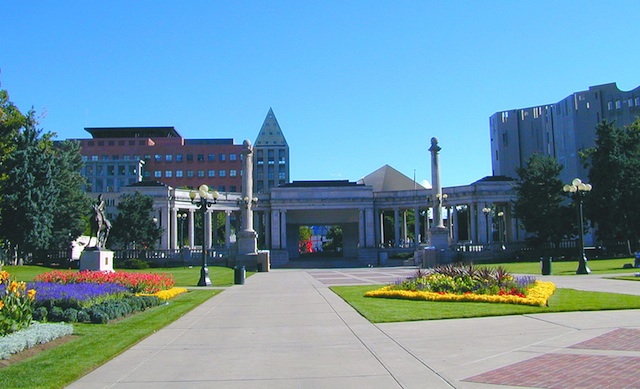 I’ve been around the college-teaching-as-indoctrination-rather-than-education block before. In 2006 I was identified by David Horowitz as one of America’s 101 Most Dangerous Professors.  My response to this outing is here.  Because he hasn’t done any college teaching Mr. Horowitz, like many other right wing culture warriors, doesn’t seem to understand that it’s way more interesting (and fun) to let students make up their own minds about the substance and meaning of a subject matter than to force them into agreeing with you.

And that’s the case with what I ask students to do in Civic Center Park. As I did with last year’s class, I sent them to the Park armed with general concepts for describing and classifying monuments, as well as ideas from both sides of the “Monument Wars.”   They make their own evaluation of the public history that’s recorded in the park based on data that they collect and organize. For two years in a row they’ve decided that the monuments in Civic Center Park—as we might expect of any park that’s rooted in the City Beautiful tradition—to reflect, with rare exception, a White, Western cultural bias focused on themes of colonial expansion and heroism in warfare. And maybe that’s because the monuments actually do tell such a story for anyone who cares to undertake a systematic, comparative analysis. Wishing it were otherwise won’t change that basic fact.  But this doesn’t have to alter the other fact that visiting the park can be an enlightening and enjoyable—if sometimes unnerving—cultural experience. 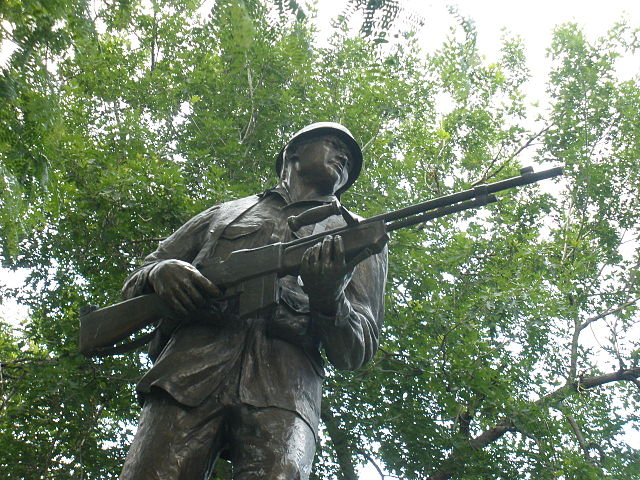 Some of my more enterprising students from this term consulted the Park’s Master Plan while completing their analysis. Now that the park is on the NHL list it will be interesting to see how the plan gets implemented from here. My students have some suggestions for how the experience of visiting Civic Center Park could be improved by some material reconditioning:

* Commemorate a few more Colorado heroes, preferably from the ranks of women or civil rights activists. But even some dead white males would do.  Zebulon Pike was one suggestion; I offered up Silas Soule, whose current civic memorial at the site of his assassination in downtown Denver doesn’t exactly enjoy pride of place in its setting at 15th and Arapaho. 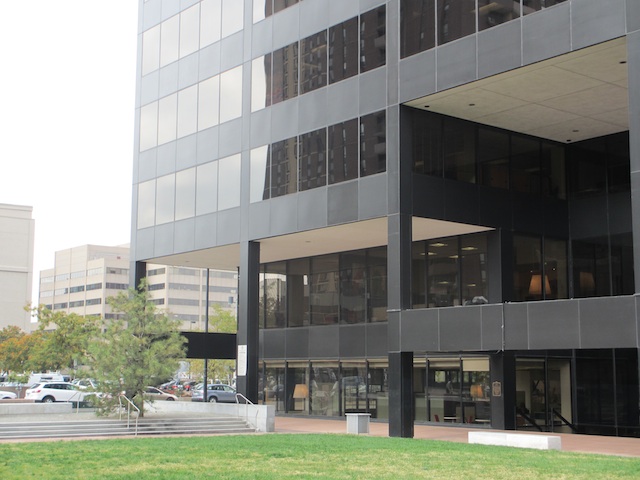 * Create  a “Free Expression Zone” somewhere in the Park (students noticed graffiti on several monuments like the bit that said “Death to Columbus” on the monument to the New World’s discoverer).

* Provide play areas for kids, given the need for urban cores to become more family-friendly.

* Find some way of extending the 16th Street Mall to the park, or add a pedestrian bridge across Colfax Avenue and/or Broadway. 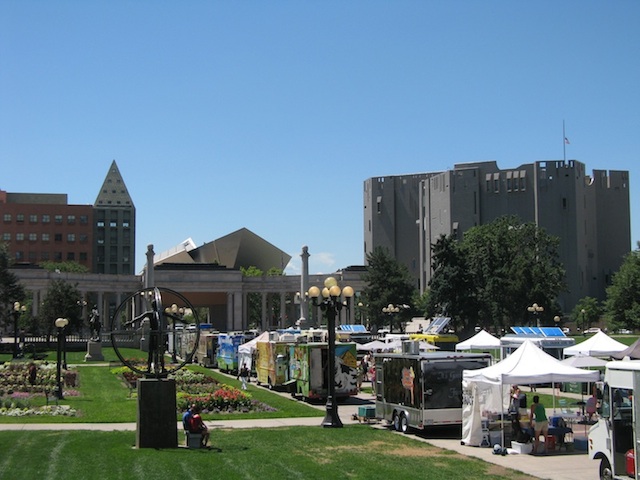 I asked the students to comment on whether City Beautiful advocates would approve of the way the park is being used. The answers were mixed.  On the one hand, several students noted that the park attracts a diverse crowd of brown-bag lunchers, and that social inclusivity is helped by introducing a community garden and food trucks.  Some suggested that the Park needs to host more activities other than the regular big events (e.g., The People’s Fair, Taste of Colorado), like weekly farmers markets.  Increasing the number of small events is, in fact, something stipulated by the Master Plan.  On the other hand, just about everyone experienced encounters– sometimes uncomfortable–with transients and drug dealers.  One of my students, Joel Cruz, describes his encounter with one such person in a way that not only summarizes the challenge facing Civic Center Park master planners, but Denver’s civic leadership more generally:

As I was walking through the [Greek] amphitheater taking pictures and writing notes, a gentleman came up to me and started by saying, “Hey man wanna buy some chronic?” I just responded with no but he continued, “What are you doing out here?” I told him I was writing a paper for school about Civic Center Park. He looked at me and said, “Dang man my bad– you’re in school and I’m trying to sell you chronic.” I told him it was OK and to have a nice day, but as he walked away he said, “You too man. Just remember they don’t treat the people out here as good as those buildings.” And he pointed to the amphitheater and walked away.