This is one of the big questions at issue in the Intercultural Urbanism blog posts archived under Water and the City.  It’s also the question I brought to a half-day focus group about water supply and land use held in Denver last month. The event was sponsored by the Colorado Water Institute and The Keystone Center.  These entities have joined forces to tackle what they call the “dilemma” of water use in Colorado. At the heart of the dilemma is this: a state’s economic viability often depends on growth, yet water—as an obviously key requirement for economic growth—is a precious resource that can’t be harvested willy-nilly.  Complicating the dilemma is the fact that not everyone who deals in water supply and land use in the state is on the same page.  Land use planning is typically a local governmental concern, while water planning and allocation occur on multiple local, state, and federal levels.

The event was held July 10 at the REI flagship store on Platte Street.  It was attended by about 35 people including water providers, water engineers, water lawyers, state legislators, city officials, health specialists, conservationists, developers, academics, and even a Colorado Supreme Court justice.  The question before the assembly was whether to establish a “Colorado Water and Growth Dialogue for Action” group that would integrate a broad array of theoretical, practical, and geographical perspectives on Colorado water planning and land use.  This initiative would explicitly play off of a consensus achieved at the July 2011 Colorado Water Workshop in Gunnison calling for greater dialogue between water supply managers and land use planners, and a “test” dialogue that occurred in March 2012 at the annual Rocky Mountain Land Use Institute meeting (a summary of which is here).

It was a pleasure to be included in the water and land use focus group.  The informal roundtable format allowed individuals to contribute as the spirit moved.  The result was a stream-of-consciousness discussion that brought to the surface many interesting issues.  The downside was that, because of time constraints, none of the issues could be discussed at-length or in-depth.  Still, I got a sense of how my question might be answered.  The answer seemed to be that yes, a sufficient water supply exists in Colorado to support growth without any net increase in water consumption even beyond the year 2050.  Indeed, one expert suggested that water supply gap is not the appropriate term for what bedevils us. Rather, it’s a structural deficit that has some people not getting what they need. I took this to imply that the problem is not one of supply but of distribution or allocation (although no one would be foolish enough to suggest that water conservation should not be a priority).

A spirit of pragmatism permeated the meeting room.  Growth in the West has rarely been constrained by water availability.  Growth is going to happen.  Hundreds of companies are targeting Colorado as a business location. Millennials want to move into the state and, with aging Baby Boomers, want to live in walkable urban cores and suburbs.  The question, then, is how do we grow?  Densifying cities and other settlement clusters is one obvious answer.  As one attendee put it, we need to replace “plants with people.”  But that solution is problematic.  Not all citizens like or want density, and we don’t know how much water savings is achieved by densifying.   There’s also the question of what water-saving density would look like in terms of settlement form. 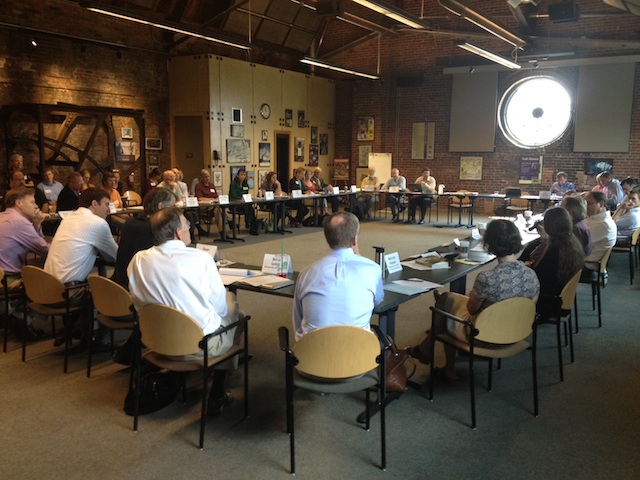 A couple of informed predictions about housing got my attention.  One is that by 2050 between 50-75% of existing Front Range housing stock will have been replaced.  Moreover, detached housing costs will become increasingly prohibitive for families, thus further pushing municipalities toward different ways of housing people.  This situation presents an opportunity for exploring new ways of looking at how we address water and growth.  Consequently, I  found myself thinking about this challenge from an intercultural perspective.  Will housing stock replacement be sensitive to urban immigration trends and increasing ethnic diversity and difference?  Will developers and home builders consider the alternative cultural values that govern household size, configuration, and water use?   Or will the touchstone for redesign be the norms and values of a white, middle-class, Western demographic?  And, if education about water use efficiency is key to remedying what some called “dysfunctional cultural behavior,” what would educating a culturally-diverse target population look like?  How ethnic diversity affects urbanism is still an afterthought even in more progressive, sustainability-conscious urban planning circles (e.g., see the March 2012 issue of Colorado Urbanist, page 22).

At the end of the day there seemed to be some consensus on a couple of points.  One is that we need a “paradigm change” in the way we think about water and growth. The new paradigm should not set up false choices or dichotomies such as growth vs. no growth.  Another is the dichotomy between agricultural and municipal water use.  Support was expressed for the idea that water can be successfully moved between these sectors, and that moving water from agriculture to the city won’t necessarily devastate agriculture (although legislators from rural areas might disagree).  Still another was the dichotomy between Colorado’s Front Range and Western Slope. A good bit of the state’s water is redirected from the Western Slope to the Front Range, but the latter might end up having something to teach the former about effective water planning and use.

Certainly there was a greater consensus around the idea that we need to get the professionals who deal with water out of their institutional “silos” and into a more productive conversation with each other. Plus, new people need to be brought into the conversation.  Who’s missing from the conference table that should be there?  Answers include economists, landscape architects, realtors, homebuilders, someone representing agriculture, and citizen planning commissions.  The representative from Denver Water cheekily suggested that, at the very least, we need fewer water people at the table!   Also needed is a will among all parties to work together in ways that don’t simply re-create wheels or yield the same shopworn policy recommendations.  To their credit the Colorado Water Institute and Keystone Center are undaunted, and will proceed to develop a structure and a logistics for continuing the dialogue about water planning and land use in Colorado.