Water and The Wilderness City

My title comes from that of the Rocky Mountain Land Use Institute’s 21st annual conference held last week at The University of Denver’s Sturm College of Law.  “The Wilderness City: Nature, Culture, and Economy in the Next West” was framed in terms of the  following theme: 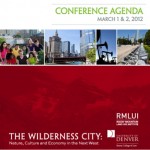 The Rocky Mountain West is characterized by majestic peaks, rolling prairies, rugged plains and vast open spaces. At the same time, the West is home to rapidly growing cities like Denver, Las Vegas, Albuquerque, Salt Lake City, Phoenix and Boise, as well as countless small towns trying to remain viable in an increasingly urbanizing region. Interestingly, as urban centers continue to grow, they are seeking to reconnect their local cultures and economies to what remains of their native ecology…“Wilderness Cities” like Vancouver, Canada blend the wild and the urban seamlessly, with skyscrapers and industry nestled up against rain forests, killer whales and coastal mountains. How can a Wilderness City model and other “green” development approaches not only make Western communities vibrant economic centers but also strengthen our connection with the land?

My schedule permitted attending the conference for just one day. I went to two sessions on water that were relevant to an Institute for Enterprise Ethics research grant that I have with colleagues in DU’s Daniels College of Business.  The theme for the water sessions was pitched pretty simply:

The Rocky Mountain West is one of the fastest growing areas of the country and one of the driest. These sessions address the challenges municipalities and regions will face in meeting the challenges of water supply and demand.

The first session was called “Water and Growth: Can We Wrestle With the Paradox?” The paradox in question derives from the fact that growth is necessary to ensure the economic viability of western cities, but this inevitably raises the specter of water shortages.   The panel brought together water supply and built environment planners in a dialogue about whether the  paradox can be solved.   The second session was called “Water Conservation in West: The New Normal.”  Speakers addressed the institutional and practical needs for water conservation in the Western United States.  They identified various techniques being implemented to conserve and reuse water resources, and considered the evolving regulations for water conservation from both land use and water rights perspectives.

Some of the key takeaway messages of the sessions, considered together: 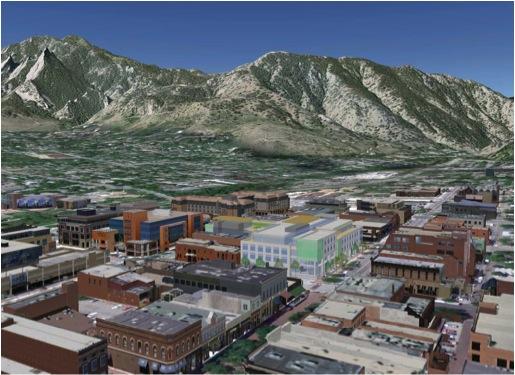 The conference speakers were informed and provocative.  I learned a lot that was new and that also reinforced much of what our research team has already discovered about Western water through interviews with various local subject matter experts.  But while plenty of ideas were suggested about what can be done on the water use side of the “paradox”, significantly less was offered on the land use/built environment side.  Specifically how—in the language of the Bates Report—our water footprint can be reduced “through development design and building choices.”  One audience member living in Denver’s Stapleton community broached the issue by noting that development’s use of small lots and xeriscaping.  A panelist in the second session—Harold  Smethills, the developer of Sterling Ranch—gave a comprehensive summary of design and building choices at that most water-conscious of Front Range exurban infill projects. These include high density residential clustering into “urban villages”, exclusive use of grass as an “accent strip” (i.e., as a “throw rug rather than a carpet“), TigerTurf for pets, infrastructural provisions for rainwater harvesting, 37% dedicated open space, gardens instead of golf courses, and 30 miles of hiking, biking, and horseback riding trails.

Certainly, land use and water planning at Sterling Ranch is consistent with the aims of the “Wilderness City.”  The development is tailor-made for a particular demographic: active-lifestyle young professionals on tight budgets looking for an affordable first home, as well as the older “last home” market.  But there are, of course, lots of other urban demographics to be served including those who occupy–either by desire or necessity–the urban core and who have no budgets to speak of.  Addressing the water and design needs of these demographics requires, I think, problematizing other terms that came up in the day’s discussions but whose meaning seemed to be taken-for-granted by conference participants—perhaps because the panels and audiences were ethnically, culturally, and economically homogenous.  These include terms like “public”, “values”, “housing” and, especially, “culture.”  I’ll take up this topic in a separate, soon-to-follow post.