The annual Rocky Mountain Land Use Institute (RMLUI) conference, held on the University of Denver campus since 1992, is the region’s premier gathering of land use and planning professionals. It’s also a terrific opportunity for eggheads like me to learn something from on-the-ground practitioners in an intimate setting. What follows are some notes for Planetizen readers about the March 16-17 conference. I’ll recount my experience chronologically, highlighting key points regarding the conference theme of “Creating Inclusive Communities” [pdf]. I’ll close with some thoughts about the urban university’s role in helping to advance an Inclusive Communities agenda.

In her welcoming comments, RMLUI Executive Director Susan Daggett framed the conference theme as especially compelling given the outcome of the 2016 election, suggesting that we need a broader perspective on what it means to be “inclusive.” The conference keynote speaker, Colorado’s senior United States Senator Michael Bennet, urged participants to provide “new and progressive thinking about the topic, rather than repeating someone else’s talking points.” I take both Director Daggett and Senator Bennet as calling for a significant paradigm shift in how we view the relationship between urban space and social life.

Thursday morning, I attended the session “Rising to the Century’s Challenges: Cities as Innovators and Problem Solvers.” Here, I heard the first of several arguments about how urban planning and design that’s sensitive to environmental and social realities is crucial to the future of cities. The rub, however, is that many graduate planning programs don’t directly address these realities. Session contributor John Marshall, of the Georgia State University College of Law, reported global survey data indicating that 65 percent of planning school curricula currently lack a course on climate change. Forty-seven percent lack a class on social equity. Forty-one percent lack a class on citizen participation. Given my interest in intercultural planning, I’m wondering how many graduate programs lack a class in cultural competency or a survey course in how cultures across time and space vary in their approach to city-building. I’m guessing that the number is more than 50 percent, a point I made in my conference contribution to the “Fast and Furious” session (more below).

Thursday’s Plenary Lunch session dealt with “The Big Picture: Macro-trends in the Economy, Planning, and Zoning.” The lineup of speakers arguably illustrates one problem with the planning profession: all were white men trained at Harvard University. Nonetheless, the contributors made useful observations. With respect to economy, it was suggested that there’s too much retail space in American cities. This implies that we need some repurposing of these spaces, e.g., as job training sites for people who have been left out of the economic recovery. Regarding planning, a plea was made to design places that bring people together given changing urban demographics. This means focusing on immigrants and not just the coveted millennial demographic…although it was interesting how discussion throughout the conference tended to prioritize the latter. The planning professions must also evolve to better deal with urban decline (or, contraction) rather than simply urban growth. Finally, zoning codes are historically predicated on exclusion and division; i.e., big house lots and gated communities. Going forward we need to employ flexible, hybrid approaches to zoning; i.e., a combination of use and form-based codes. This means looking to northern European cities for models sensitive to resource constraints and global economic pressures. I would argue that we need to look beyond northern Europe in our search for these models; e.g., to the Global South and into Deep History (more below).

Thursday afternoon’s “Beyond the Blacktop: Organizing for Habitat and Health” featured some excellent talks by people involved with the Metro Denver Nature Alliance (MDNA). Chris Smith of the Colorado Health Foundation (CHF) confessed to having never looked at planning and design work through the lens of health. Our built environment clearly promotes sedentary and unhealthy lifestyles, especially in low income communities where childhood obesity is a huge problem. Other session participants provided examples of how we can do better. “Community-directed” approaches in Denver’s economically-impoverished Westwood neighborhood have transformed parks, playgrounds, and alleys in ways that promote health as well as the security and beauty of the built environment. Architecture can also play its role. Smith’s description of the healthy design features of CHF’s new building in uptown Denver reminded me of a favorite example of how architecture can not only serve the cause of health but also of intercultural literacy: the Maya-themed interactive stairway in an apartment building in Denver’s Mariposa development, pictured below. Like the hieroglyphic stairway at Copán, Honduras, the Mariposa stairway recounts a Maya origin story, but one that that uses narrative and colored lights in an effort to motivate children to use stairs instead of elevators. 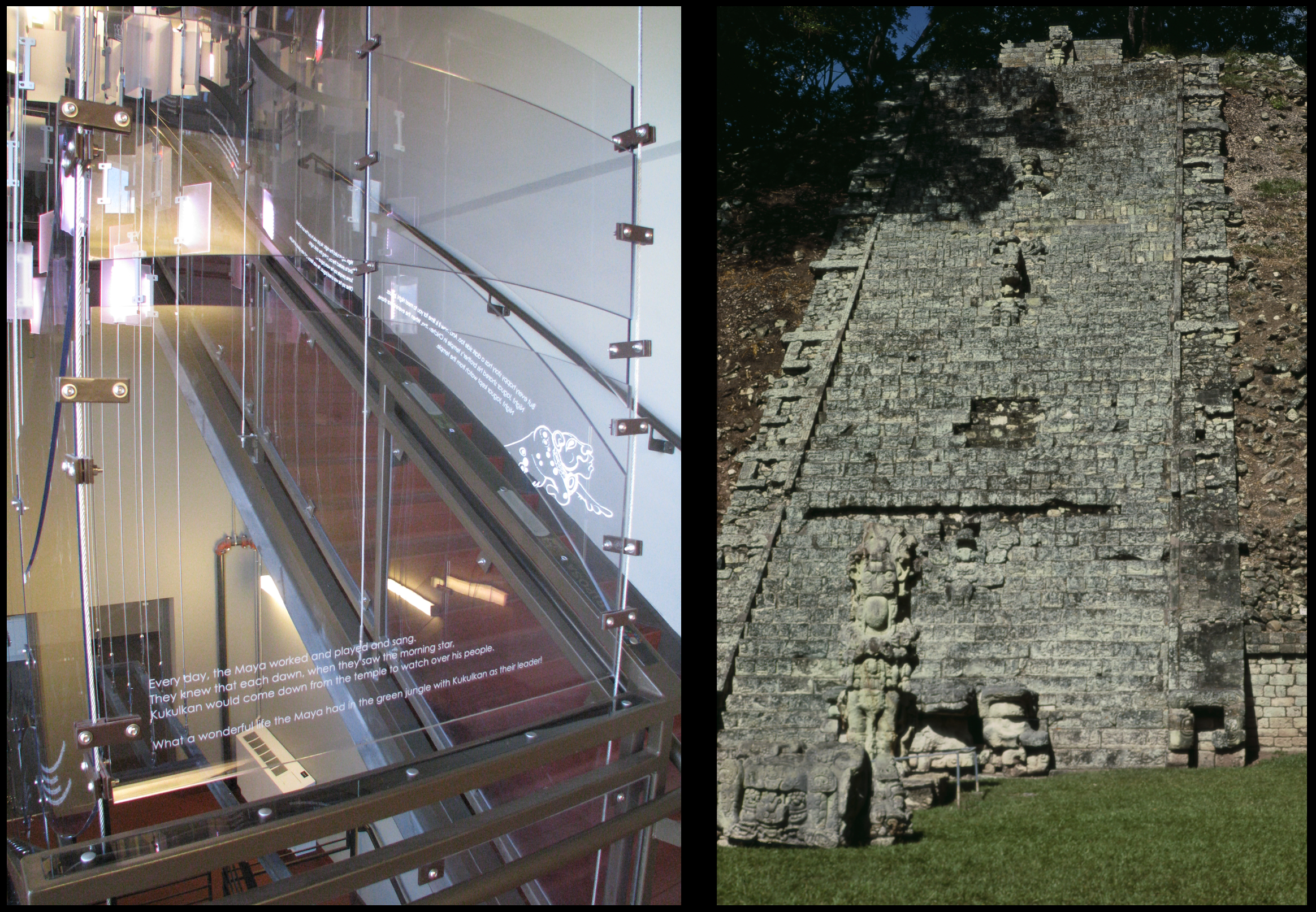 An interactive stairway at Mariposa (left photo by D. Saitta) and a hieroglyphic stairway at the ancient Maya city of Copán, Honduras (right photo via Wikimedia Commons).

Friday morning’s opening session, “What’s Next with TOD? Bringing High Tech and New Industry Jobs to Transit Stations,” offered a sobering perspective on Transit Oriented Development. Comparative research suggests that it’s wishful thinking to believe that TOD will necessarily create jobs and benefit low income people. Chris Nevitt, Denver’s first-ever city-wide manager of TOD, noted that there’s “nothing automatic in the relationship between transit and TOD” that will entice people out of their cars. In fact, Denver today is as auto-centric as ever. The University of Denver’s own transit station serves as a metaphor for the challenge that confronts us. Devoid of retail and other amenities, its dominant feature is a parking garage, as pictured below. The “urban centers” that are popping up around TOD stations in other areas are also proving problematic. These places are adding housing but losing jobs, and the most dynamic urban centers are not associated with TOD. 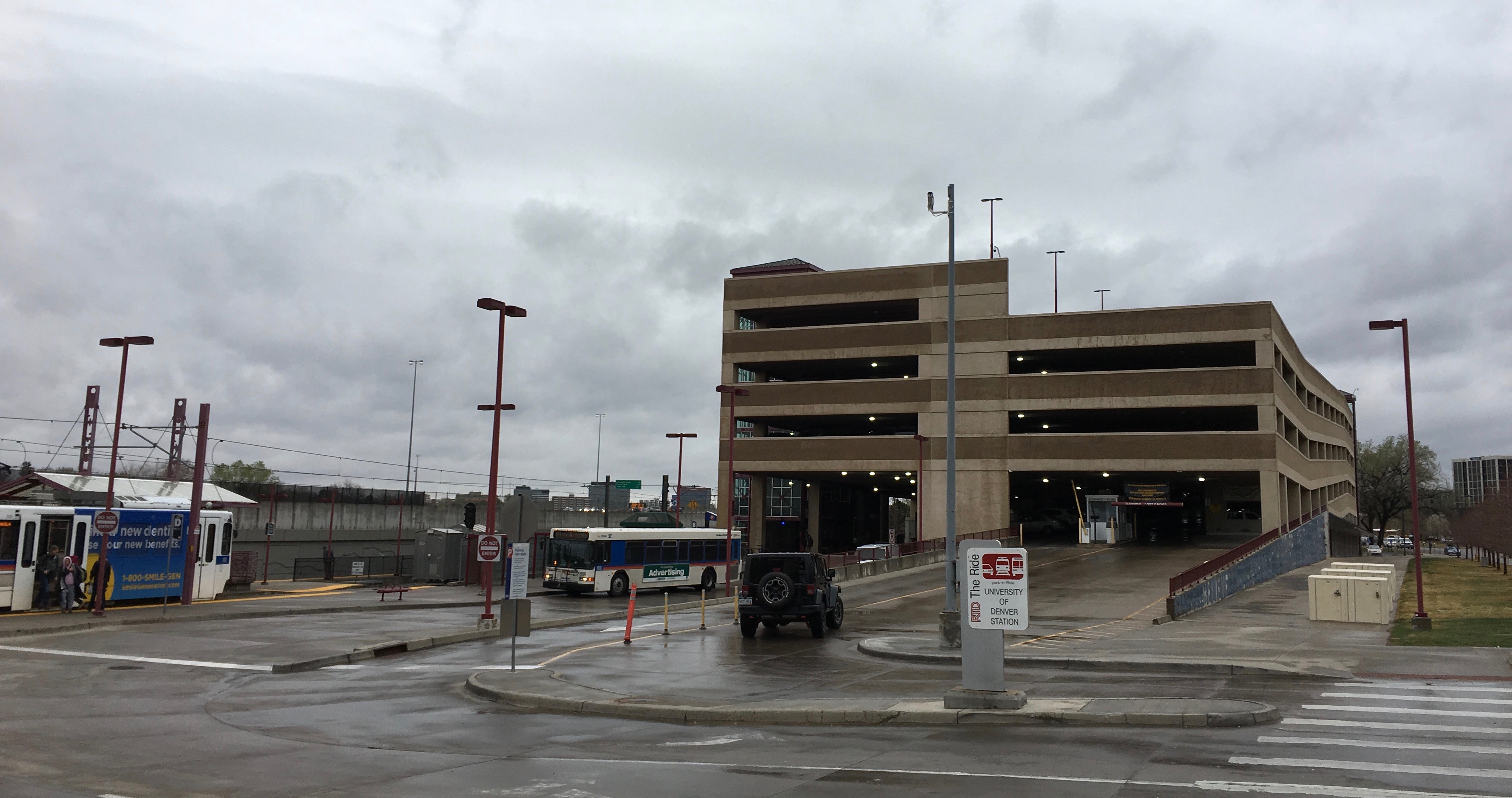 Friday morning’s second session was “A City in Transition: Building the Diverse City of Tomorrow.” The transitional city in question is Aurora, Denver’s next door neighbor. Aurora doesn’t get much love given all the excitement about Denver as a destination for millennials. Thus, the session may have been one of the more lightly-attended. It was, however, the highlight of my conference because of its focus on the relationship between planning and cultural diversity. The facts about Aurora would likely surprise many people. Aurora is already a majority-minority city. Nearly 20 percent of its population is foreign born. Students in Aurora public schools speak 140 different languages. Although Aurora is much more culturally integrated than Denver, challenges remain. The city is still not very diverse from a land use, public space, and housing types perspective. To change this, city planners are working diligently with the community, via workshops, online outreach, comment cards, and other forms of citizen engagement. They are also targeting developers who can help diversify Aurora’s urban fabric. This is all terrific stuff. In my opinion Aurora, not Denver, is the city to watch for progress in creating a truly inclusive and intercultural city. 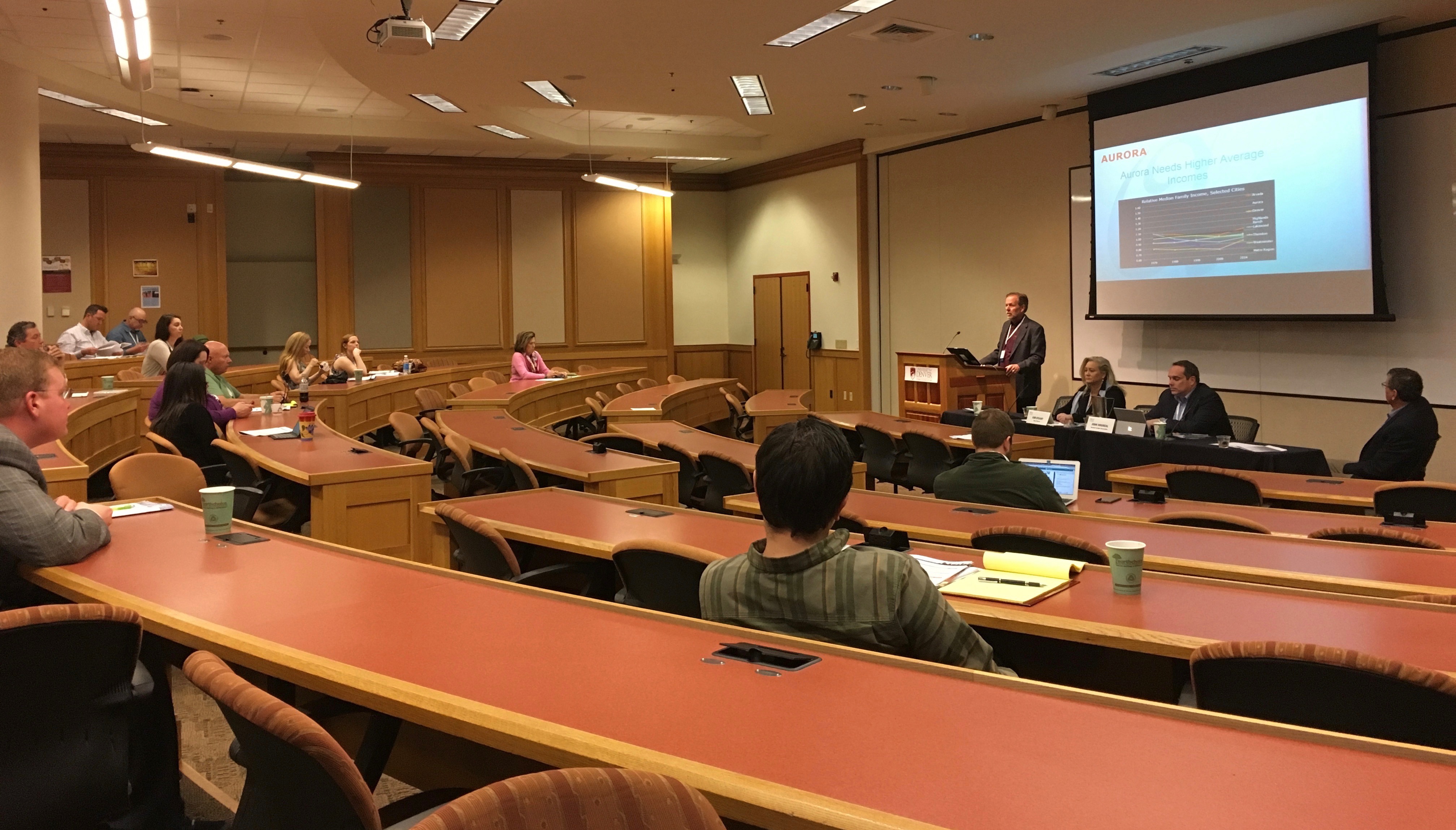 Friday afternoon’s “What’s New with Planning on the Front Range?” consisted of a panel of eight planning directors (seven men, one woman) from Rocky Mountain Front Range cities, geographically distributed between Fort Collins and Colorado Springs. They reported on planning developments in their separate domains, and then spoke to two specific topics of shared interest. One topic on which they agreed is the need for a regional, collaborative approach to planning so that problems associated with urban sprawl can be solved rather than simply moved around. The second topic of agreement concerned economic development. The planning chiefs called for infill and redevelopment projects that will attract millennials (no surprise!) and allow senior citizens to age in place. They also called for affordable housing of diverse types, although it wasn’t entirely clear what “diverse” meant in this context. 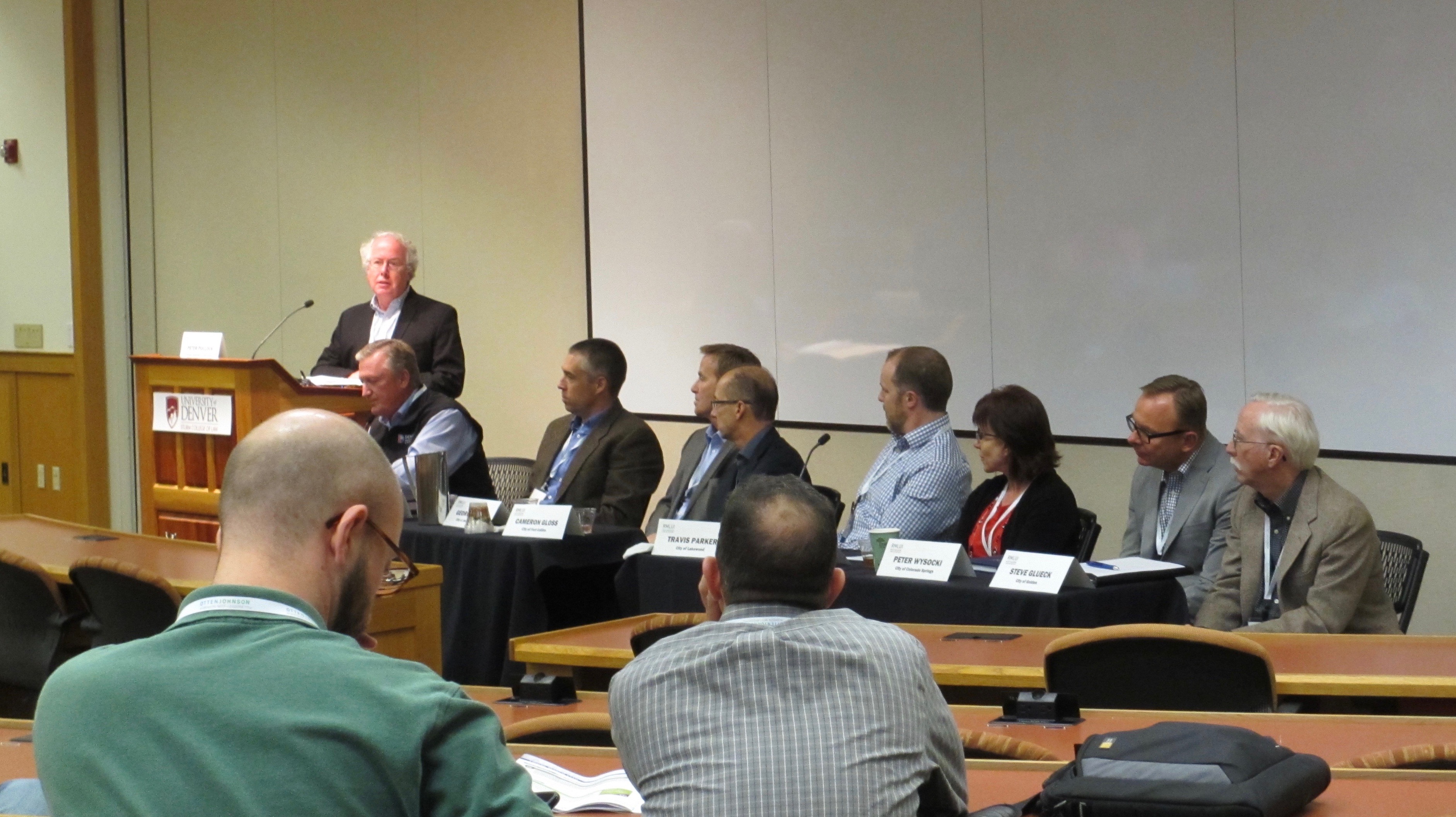 The conference ended with “Fast and Furious,” a series of rapid-fire, interactive seven-minute talks in which I was a participant. My talk, titled “Composing Cosmopolis,” highlighted some European planning principles but also urged attendees to look further; specifically, to the Global South and into Deep History; i.e., the Ancient World. Ancient cities were nothing if not compact, mixed use, flexibly-zoned, and walkable communities. They were centrally planned, but also organically evolved by citizens. Many had the added virtue of being organized with the natural landscape firmly in mind. The ancients routinely invested cultural meaning in these landscapes, something that enhanced their prospects for settlement sustainability. Ancient cities were often ethnically diverse, populated by immigrants seeking the dynamism of urban life as well as refugees displaced by warfare and climate change. Yet, they cohered and prospered over very long periods of time. Thus, I think that there’s potentially much we can learn from ancient cities about how both top-down and bottom-up planning and design can support social integration, inspire cultural innovation, and promote a shared civic identity.

The most passionate and compelling “Fast and Furious” presentation was by Yvette Freeman, senior strategist with Progressive Urban Management Associates. Yvette spoke to the development of Denver’s Five Points neighborhood, where she was born and raised in the 1960s and 1970s. She doesn’t like what she’s seeing. Comments from new white settlers about “how nice the neighborhood is now” betray a deep ignorance of the area’s history. For Yvette, the gentrification heralded by these newcomers is not revitalization but rather a new wave of colonialism, a form of “social cleansing.” Genuine revitalization happens from the bottom-up, not from the outside-in. Gentrification, at its core, is a social justice issue. 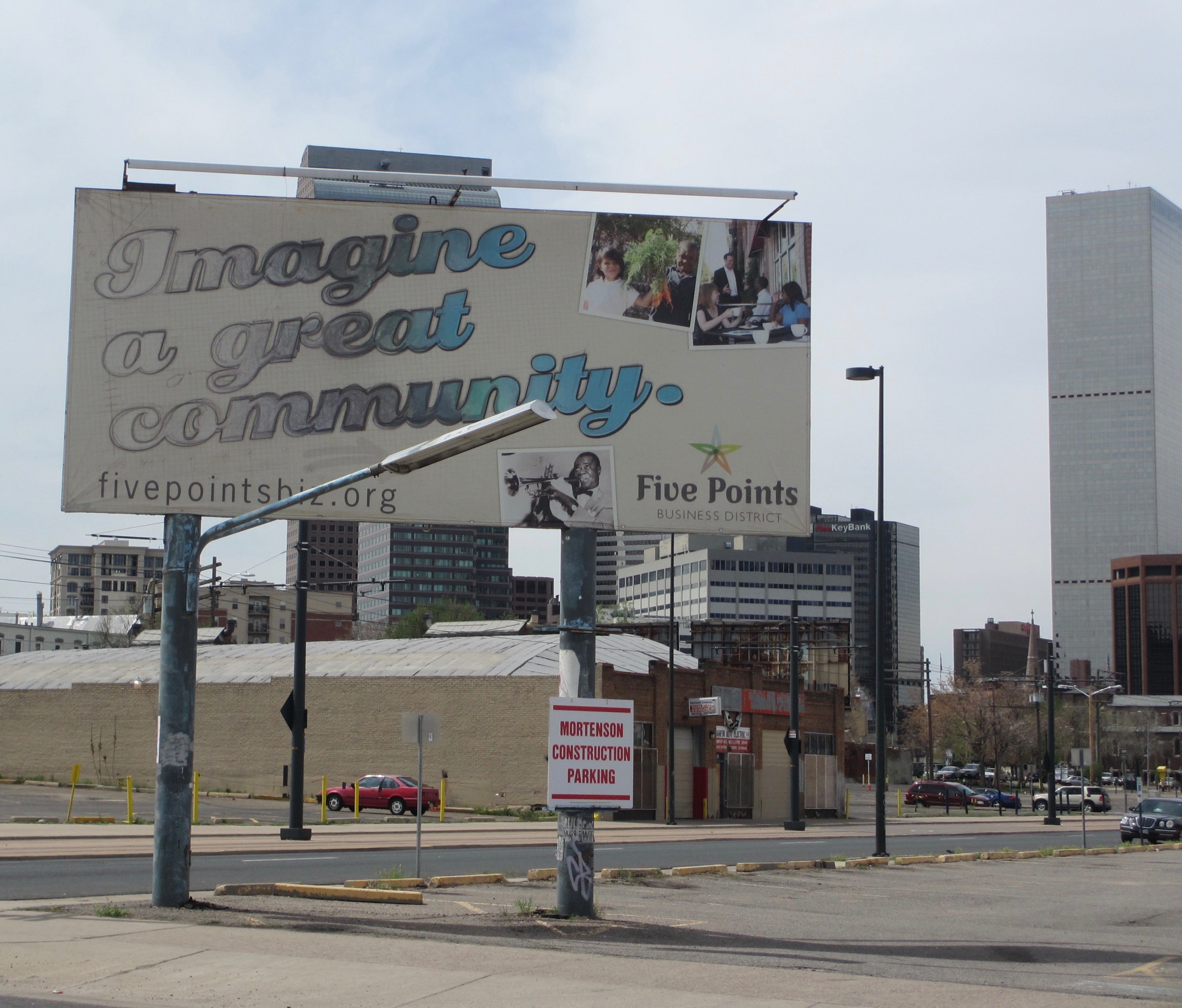 The 2017 RMLUI conference succeeded in highlighting the key issues around urban inequality and inclusivity that challenge us. It also prompted some thoughts about the urban university’s role in advancing an inclusive communities agenda. As many contemporary observers have pointed out—most recently and prominently the author of The New Urban Crisis—for every triumphal narrative about urban regeneration and successful placemaking, there are multiple alternative stories about displacement and re-segregation of urban populations by race, income, health, and education. My city of Denver, as several RMLUI conference speakers noted (and as civic boosters routinely proclaim) is one of the economic success stories. My university doubles down on this reputation where, in its marketing and strategic planning materials, it repeatedly frames Denver as a Destination City for millennials. Alternatively, my suggestion that we frame Denver as an ideal Urban Laboratory for critically exploring the myriad of issues around diversity and equity that are affecting cities worldwide has fallen on deaf ears. I see this as a serious conceptual mistake for an institution that promotes an engaged, serving-the-public-good mission. Urban universities should be incubators of critical inquiry, not surrogates for the Chamber of Commerce.

The RMLUI conference also succeeded in further substantiating the need to “de-siloize” theory and practice among city agencies and academic disciplines. Collaborative, interdisciplinary, and trans-historical scholarship is the only way to address today’s pressing urban issues. Again, my university is a cautionary tale: our Urban Studies faculty have yet to be meaningfully included in the current strategic planning process focused on positively impacting the campus neighborhood and the wider Rocky Mountain region. Such disregard for the comprehensive and comparative perspective on human settlement that Urban Studies scholars can provide is a serious tactical mistake. In keeping with Director Daggett’s welcoming comments and Senator Bennet’s conference keynote challenge, we need new, out-of-the-box thinking about the contemporary urban condition. This will require bringing together everyone who has anything relevant to say about a topic. One never knows what novel concepts and tactics will emerge from such broad-based encounters between different disciplines and viewpoints. This is the beauty and promise of inter-departmental and interdisciplinary collaboration, which is the only way forward if we’re to shape a new urban future.

Acknowledgement: My participation in the 2017 RMLUI Conference was generously supported by the RMLUI and the University of Denver’s Interdisciplinary Research Incubator for the Study of (In)Equality (IRISE).