An Eyewitness Report From Salvador, Brazil 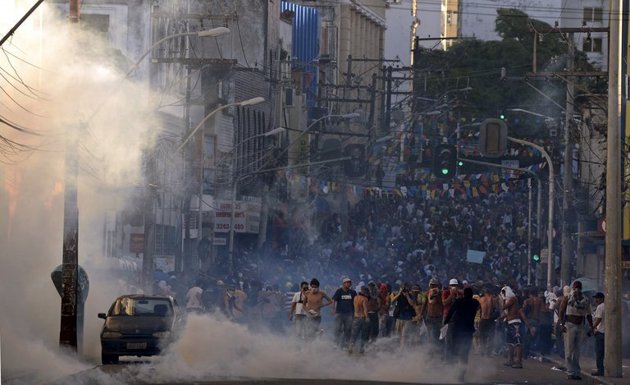 Like the insurgency in Turkey, this week’s insurgency in multiple Brazilian cities goes squarely to a citizenry’s right to the city: its infrastructure, public space, economic and social resources, and processes of political decision-making.  This evening a colleague at the University of Massachusetts-Amherst forwarded the following report from Salvador, Brazil:

The protests in Salvador are around the stadium where the [Confederation Cup soccer] games are happening.  Since one of the agendas is the money used in [next year’s]  World Cup, the goal of the march is to reach the stadium that is in downtown Salvador. The march starts in Campo Grande and goes walking until the Dique do Tororó (the big lake with the images of Orixas), close to the stadium. The police threw bombs to make the protesters de-concentrate and don’t get until the stadium. So everything is happening in the center (Campo Grande, Piedade, Joana Angélica and Dique). Also the center is a important historical place of march and protests.

Yesterday I went to the march and my first impression was of a large quantity of middle class elite kids demanding generic agendas like “end of corruption”, “better education”, “the giant woke up”…I have to confess that was the first time that I share a space (so closely) to these people. They were concentrated close to the elite neighborhoods, such as Vitória.

I was worried about the absence of a racial and gender equality message. I found a little piece of paper and wrote ” for the end of black youth genocide.”  A woman ask me what did I mean.

In as much as I was walking I saw more popular individuals (black women and man, poor people, young students). They carry posters advocating the same generic agendas but also a few messages like “if you woke up now, the ghetto is awake since a long time ago.”  Then I saw more poor people, blacks gays and lesbians carrying messages against the “gay cure.” These people were in the front, confronting the police.

I have the impression that there are several diverse agendas and vindications, different dissatisfactions and demands, since the more conservative ones (no for the cuban doctors coming to Brazil / or the participation of the Neo-Nazi groups in Sáo Paulo), since the more radicals demanding better transportation (nor only the reduction of price), end of gender and racial equality (in a minor quantity). I think, based on yesterday, that after the police violence and the radicalization of movement and also the incorporation of more popular agendas this white, middle class elite will leave the protests.

Yesterday a group occupy the Itamaraty building (International relations building) in Brasilia, and there are a lot of attacks on banks, buses and public buildings all over Brazil.

I think in places like Salvador, the agendas will incorporate racial equality. The governor of Rio already recognized its necessity). In Salvador, Bahia, the groups of black movement and LGBTs are already discussing how to define specific agendas to the protests. Define this agendas is important because there are also conservative groups using this moment to point agendas against popular policies implemented by this government. Not everybody wants the same thing or are upset for the same reasons…