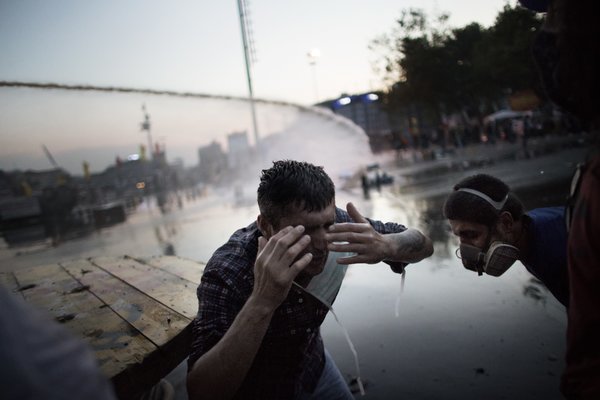 Regarding the recent insurgency in Taksim Square, my colleague and research collaborator Randy McGuire this evening forwarded the following email message from a Binghamton University graduate student, Hande Sarikuzu, who’s on the scene and asks that the news be shared as widely as possible.

I’m sorry to say this evening that there is no more Gezi park to report from. Riot police raided the park today, which was having a very normal, festival like atmosphere. I saw whole families, pregnant women, old people there. We barely escaped. I hear from the streets that people were beaten and pepper-gassed indiscriminately, women with kids on their laps etc. Several kids are lost. Lost kids are taken to the protestors, not to the police, when they are found. A safehouse hotel offering their premises for a volunteer medical center, supplies etc. was also invaded by the riot police. The resistance platform decided to get away from the park so that innocent people (revolution safari tourists) wouldn’t get hurt too much. The police is not letting the journalists in the park as they clear the tents etc. There are rumors that they are planting false evidence like drugs, guns, etc. to delegitimize the movement. Currently a solidarity group is trying to form in kadikoy, the Asian side, getting ready to cross the bridge on foot and come for help. People are infuriated, especially because the governor and the authorities are still claiming that a few “small interventions” are taking place, only against a few “marginal groups.” Mainstream turkish media continue to show soccer matches etc instead of broadcasting these news. Medical centers are gassed, volunteering doctors are beaten and apprehended. The state is now at a point where it does not or cannot distinguish between civil society and so called terrorists or “marginal illicit organizations”. This is not police intervention but a full assault against a civil democratic movement. The situation is dire but people are holding strong, despite the despair.

Binghamton friends have always and consistently showed their support in these last few weeks. I invite my fellow anthropology grad students to show their solidarity by letting everyone know and by trying to follow the news as these events unfold.