Actually, it’s a program about the 1914 Ludlow Massacre, but readers of this blog know that I’m interested in the 1913-14 striker’s camp for what it can tell us about “tactical” urban planning in a multicultural society.  It might sound like a stretch to think that we can learn anything relevant for contemporary urban planning from excavations at a 200 tent, 1200 person striker’s camp located on a bit of windswept Colorado prairie.  However, this is how archaeologists have to think if they’re to wring as much contemporary relevance as they can out of their work.  Even granting the significant scale differences between Ludlow and, say, Denver, socially integrative principles are socially integrative principles no matter what the settlement scale.  How those principles shaped the built environment at a culturally diverse community like Ludlow under very challenging political and economic conditions is, in my view, a fascinating research question.  We have a long way to go to clarify principles of intercultural planning and design at the tent city given that only 1% of the area has been excavated.  But I’m still betting that there’s a whole lot more to learn beyond what’s reported elsewhere on this blog.  Click on this image of the tent city for the Colorado Experience broadcast: 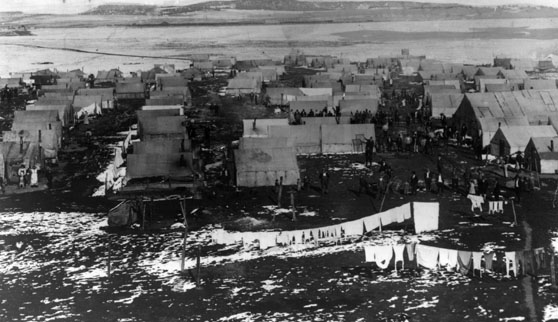 On a related note, today I was at the state capitol to witness Governor John Hickenlooper’s signing of  an Executive Order creating the Ludlow Centennial Commemoration Commission, of which I’m a member.  The signing formally kicks off a year of state-wide events–lectures, exhibits, interactive performances, and lots of other stuff–commemorating the 100th anniversary of the conflict that changed the course of American labor history.  The Executive Order is here: