The big stuff is covered by a recent article in the journal Cities by geographers Keith Ratner of Salem State University and Andy Goetz of the University of Denver.  Ratner and Goetz provide a comprehensive look at transit oriented development (TOD) in Denver.  Eric Jaffe at Atlantic Cities summarizes some of their key findings, including documentation of a roughly 20 year trend of increasing population density in Denver’s urban core and, in the last 10 years, significant increases in residential, retail and office growth around new transit stations. Jaffe also suggests that TOD in Denver is changing the “character” of the city.  However, I’m not so sure about that. Urban land use and form is one thing; urban character is quite another. Character depends in large part on the kind and quality of available public space, its capacity for supporting different kinds of cultural activities, and the ethnic and class mix of the people who use it.  At present Denver is just as challenged as any other city where the character of its public spaces is concerned. 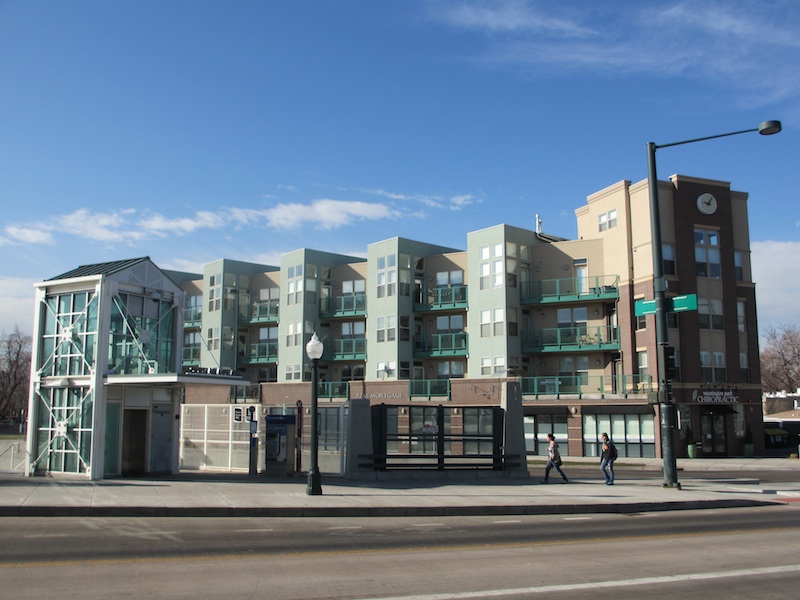 Character building is the stuff of small urbanism.  The same week that Atlantic Cities reported on Denver’s TOD a new website dealing with tactical urbanism in Denver made its appearance.  Tactical Urbanism Here will, according to Steve Chester and collaborator Michelle Pyle, catalogue and map local, do-it-yourself interventions to show how small-scale change can have big impacts on the cityscape.  Examples of such interventions have been the subjects of previous posts on this blog, like ciclovías and food trucks. Coincidentally, around the time that Denver’s new tactical urbanism blog was launched two visiting speakers in the University of Colorado-Denver’s College of Architecture and Planning spring 2013 lecture series also broached the topic.  Candy Chang gave a great summary of her artistic interventions in multiple cities at home and abroad. This included the “Before I Die…” installation that currently occupies some space in Denver’s Civic Center Park, courtesy of the Community Coordinating District No. 1 (which also helped to bring Ms. Chang to Denver).  Equally compelling was a talk by Terry Schwarz of Kent State University’s Cleveland Urban Design Collaborative.  Ms. Schwarz offered a nice overview of various “pop-up” projects designed to promote development and engage the public in that struggling post-industrial city. 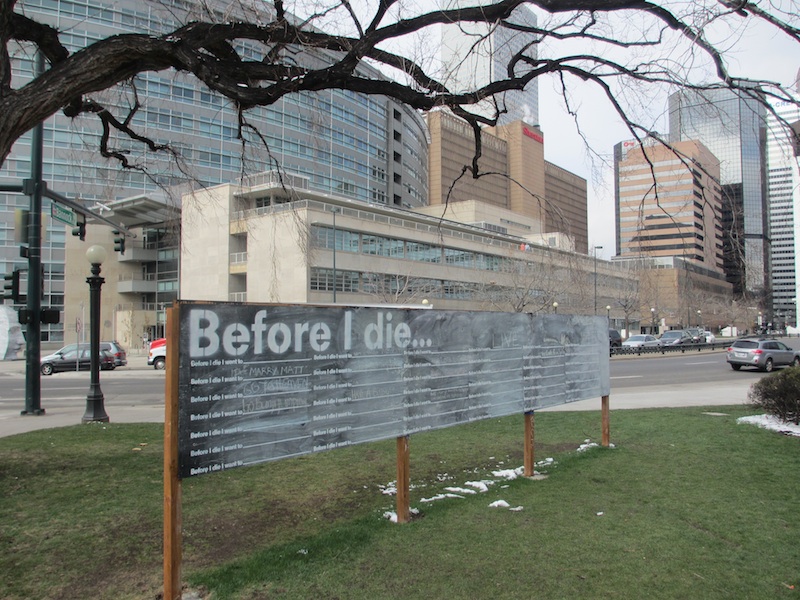 The urban space artistry and ad hoc urbanism of Chang and Schwarz, respectively, are inspiring. I certainly think there’s something to the small stuff if it prompts citizens to think about their built environment in new ways and if it opens our eyes to new development possibilities.  The key challenge for tactical urbanism is sustainability; i.e., whether citizens, developers, and civic leaders can effectively collaborate to make permanent change in a way that’s sensitive to, and informed by, a broad cross-section of community desires.  In responding to a question about whether her work had practical as well as philosophical value Chang noted that real estate developers have used the results of her famous New Orleans “I Wish This Was…” project to make common cause with citizen activists.  But, as Schwarz’s talk made clear, all too often the feel-good fixes are fleeting or end up producing more gentrification.

The main point here is that Denver is becoming a city to watch as concerns both big and small urbanism. Eric Jaffe suggests that Denver has the potential to become “a  working model for other cities to emulate.”  I agree, but there’s a lot of work to do.  As Jaffe notes (drawing on Ratner and Goetz), over 75% of people in the greater Denver metro area still commute to work by driving alone.  Self-sufficiency (and self-interest) also rules on the local scale, if the behavior of citizens, developers, and city councilpersons involved with the very important infill project that we’re chronicling at 9th and Colorado is any indication.  This project could have used Chang’s wonderfully democratic “I Wish This Was…” treatment as part of its community outreach stage instead of relying on methods guaranteed to narrow public participation.  Schwarz’s ideas about how parking garages, pedestrian bridges, and other elements of the built environment can be activated to produce more and better social interaction might still come in handy once the project’s design plan is finalized.  Many other ideas are percolating out there.  Minimally, Denver’s realization of its potential to serve as a working model for other cities will require more imaginative design work on multiple scales, better solicitation of broad-based citizen input, some economic risk-taking, and the willingness to learn from little experiments in Cleveland, New Orleans, and elsewhere.