When Urban “Branding” Amounts to Less Rather than More

Ten days ago The Denver Post contained a story by Ray Mark Rinaldi reporting on the modified plan for a new hotel and transit hub at Denver International  Airport  that has taken shape in the wake of the airport’s breakup with Spanish architect Santiago Calatrava.  Earlier negotiations with Calatrava determined that DIA could keep his basic plan but not the “touches that define his work.”  Thus, the  modified design, as described by Mr. Rinaldi,  is “more of a box than the bird Calatrava envisioned”, and “dominated by clear glass rather than white steel.” Denver City Councilman Charlie Brown—a critic of the selection of Caltrava as lead architect—was quoted as saying he likes the modified design even better than Calatrava’s original design, which ended up costing the city about $13 million. When asked about whether this money was wasted, DIA Manager Kim Day answered:

No, we absolutely did not waste money. [Calatrava] started this off, developed a great concept for us… When we lost him, the architects removed the signature architectural elements—strong, white elements on top of the hotel that held up the canopy over the train. If you look through an architectural book on Calatrava work, almost everything has these strong white elements—those are gone. As a result, our project is light and airy and simpler…” 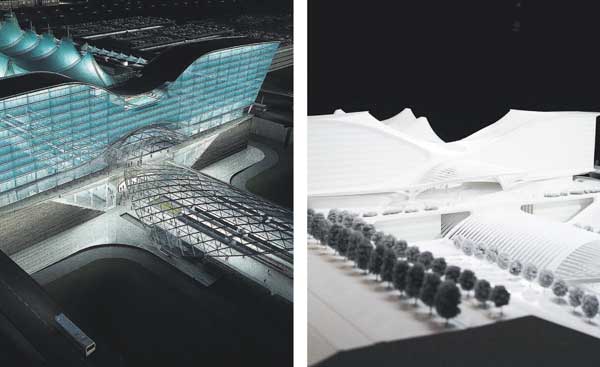 One wonders why DIA would engage Calatrava in the first place if his signature elements were viewed as redundant and his previous work predictive of an overall design that would be too complex and insufficiently “light and airy.”  Plus, it seems to me that if any aspect of Calatrava’s work would have been capable of knitting the hotel and transit hub into the existing Jeppesen Terminal it’s precisely these signature “bony” white elements. Instead, we now have webs of steel and what Rinaldi describes as “muscular” 14-story walls of glass (which doesn’t exactly square with the “light and airy” characterization offered by Day).  So the question of wasted money remains, along with the question of whether both Brown and Day are engaging in a little face-saving.  Today’s Denver Post contains a very nice letter from Dean Toda that cuts to the heart of the matter for many Denverites:

I had to laugh at Ray Mark Rinaldi’s assertion that the proposed redesign for a hotel at the Denver International Airport terminal “fits in with design of DIA.” Really, the only thing that could fit in with the current Jeppesen Terminal would be something that effectively imitates it, or something that lies low and doesn’t interfere with the terminal’s magnificent silhouette. Instead, the redesign, like the Santiago Calatrava original, blocks our view of the terminal and destroys the visual effect, as seen from afar, of the tepee village on the prairie. DIA’s decision on this hotel has consequences for all of us. The Curt Fentress-designed Jeppesen Terminal is not merely “one of the city’s most popular buildings,” as Rinaldi describes it. It is the most iconic edifice in Colorado and one of the signature buildings of the American West. To hide it behind the walls of a hotel would broadcast to the world that Denver doesn’t have enough sense to recognize bold, exciting architecture in its own backyard.