This week the Solomon R. Guggenheim Foundation—widely known for creating iconic buildings to house its museums, including Frank Lloyd Wright’s classic spiraled ribbon on Fifth Avenue in New York City and Frank Gehry’s twisted curves in Bilbao, Spain—joined the “Pop-Up Urbanism” movement.  Pop-Up Urbanism (aka Tactical or Temporary urbanism) refers to projects that reclaim vacant or unsightly urban space for active, but temporary, use.  Pop-Up projects provide low-cost amenities that improve neighborhood life and/or function to test concepts before making big financial commitments to develop them.  They include sanctioned initiatives like cafes, markets, playgrounds and parks, unsanctioned ones like “guerrilla gardens”, and quasi-sanctioned ones like urban forests.

With sponsorship from Bavarian Motor Works, the BMW Guggenheim Lab is a two-story black carbon fiber and mesh structure open at both ends that sits in a narrow 2000 square foot space separating two tenements at Houston Street and Second Avenue in the East Village.   Designed by the Tokyo architecture firm Atelier Bow-Wow, the structure will serve as a combination think tank/community center capable of 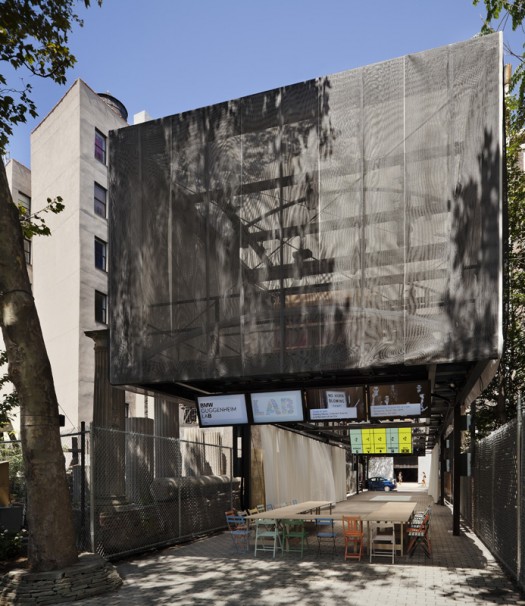 accommodating up to 300 people.  The Lab will host a variety of programs (lectures, workshops, film screenings, and other performances) organized around the theme of “Confronting Comfort” in the context of urban environmental and social responsibility.  Two other labs designed by different architects will follow, and will address other specific themes.  All three labs will travel to nine cities around the world over the next six years.

Sarah Goodyear, writing for the website Grist, attended the opening program held on August 4.  She’s keeping an open mind that conversations at the Lab will produce concrete action that improves urban life instead of “just a lot of academic theorizing in a beautiful corporate-sponsored space.”  That’s always a reasonable worry.  A commenter on her Grist piece turns rather more cynical, however:

Hmm… let’s see now: Huge corporations making tons of money, paying low or now [sic] taxes, and partly tax-funded arts institutions threatened everywhere, BUT a big one “partners” with a manufacturer of elite vehicles for private urban transportation… and Grist mentions none of this.   Whether there is editorial control or not, it does not really matter because branding is all, and keeping people driving personal cars in cities is the priority for BMW, and looks like a lot of normally clever people are falling for it…

Alternatively, we might consider Rebecca Choi’s analysis of another corporate-sponsored temporary structure that, from 1995-2000, filled an empty space near Potsdamer Platz after the demolition of the Berlin Wall.  Choi argues that the Info Box—although “tethered to corporate development” and criticized by some as a “marketing tool intended to benefit big new investors in the area such as Daimler-Benz and Sony Corporation”—helped to not only guide development but “engaged the public in an important healing process.”  This healing process was required by the emotional 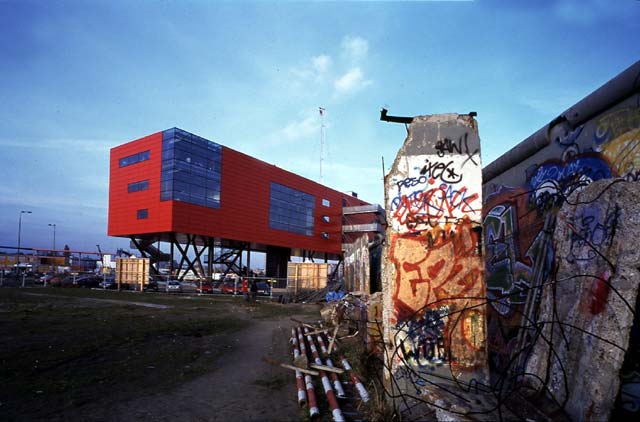 association of the building site with “broken livelihoods and severed connections.”  The structure  contained a number of exhibition spaces that educated the public about Berlin’s redevelopment plans.  From a roof-top terrace the Box allowed people to view rebuilding efforts in Potsdamer Platz.  In so doing it provided an interactive forum for people to discuss the urban landscape and a “responsive, participatory environment that communicated a message of progress and hope.“ Choi nicely contrasts this urban intervention to the lack of any such physical (architectural) intervention at New York’s Ground Zero after 9/11, where “a sense of emptiness remained as reconstruction efforts lagged.”

It seems to me that the piece of pop-up architecture at Houston Street and Second Avenue—corporate-sponsored or not—has a fighting chance of accomplishing some of the same redemptive goals.  Actually, I think there’s very little downside to any experiment that seeks to promote more and better civic conversation given the problems facing today’s cities.  The BMW-Guggenheim project also prompts me to wonder whether, and how, more formal approaches to urban design—i.e., the various competing “urbanisms” that we’ve written about on this blog—might hardwire into their final plans more accommodations for the experimental use of space so that cities might better respond to the changing needs of their people and cultures.  As many urban observers and historians have suggested, cities work best when allowed to develop incrementally. That’s a concern that overlaps with the territory of Everyday Urbanism, and will be the subject of another post. 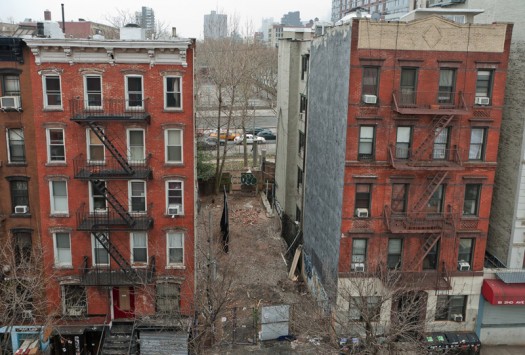