Which is a better city: Melbourne or Sydney?  Geoffrey West’s and Luis Bettencourt’s provocative ideas (reported here and popularized here) got some play today in the Sydney Morning Herald.  Reprising their argument that cities are 85% alike in the way they look, work, and evolve as a function of size West suggested to the Morning Herald that, at the end of the day, this great Australian civic rivalry (and by implication the many others that exist worldwide) really doesn’t matter.  Understanding cities, and solving their contemporary problems, depends on understanding their universal properties and not the 15% of contextual stuff—geography, history, culture—that makes them individually unique. 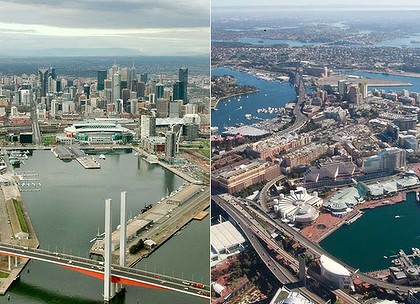 This 85-15 split reminded me of another analysis of human groupings that led to identical numerical results, Richard Lewontin’s famous 1972 study of human “racial” variation (summarized here).  The Harvard biologist made an early name for himself by concluding that 85% of all human genetic variation is contained within local populations and that no more than 15% is attributable to variables like local ecology, ancestry, ethnicity, etc.  In other words, traditional human “racial” groupings are much more alike than they are different.  For Lewontin, the physical characteristics of shape and form widely used to distinguish Africans, Asians, and Europeans are trivial, literally skin deep.  West argues much the same for what we take to be the defining formal characteristics of cities like Lagos, Tokyo, and Paris.

But does this overstate the case?  It seems that we can embrace the fundamental sameness of human beings as well as their urban settlements and still see the important number—especially if we’re concerned about the health and well-being of  individual citizens—as being the 15% rather than the 85%.  Lewontin has his critics, with some arguing that the 15% “racial” difference is critical for understanding the differential susceptibility of human populations to disease and the likely success of alternative treatments even as we accept his larger insight that the human species is a remarkably unified biological entity and that racism has no scientific justification. That is, how we regard the small percentage of difference among humans (whether with a concept of “race” or some other analytical construct) has significant implications for medical diagnosis and, thus, can be a matter of life and death for individuals.

The same may hold for the small percentage of character differences among cities.  The Morning Herald story identifies Ed Blakely, an urban planner at the University of Sydney, as someone who sees the 15% difference as “critical” even as he appreciates the generalizing significance of West’s and Bettencourt’s work.  For Blakely the 15% of urban form that can be manipulated provides “plenty of scope for good planning to make a difference” in how cities work and adapt to changing circumstances.

I would add that it can also make a big difference in the lives of individual citizens and, especially, historically marginalized and/or subaltern groups, including recent immigrants.  West and Bettencourt appreciate Jane Jacobs’ insight that the enormous creativity of cities derives from people and their interactions.  Indeed, West believes that he has scientifically confirmed the great urbanist’s conjectures about the vitality of urban interactions.  West and Bettencourt acknowledge the positive role that urban planning can play in facilitating such interactions.  But they still seem to assume–unlike Jacobs–that the built environment is little more than a passive container for human interactions rather than an active determinant of the quality of those interactions.   If we assume the latter, then city-making is better served by attending to the specifics of culture, history, and their relationship to design rather than to general laws of development.  We should seek the 15% solution to urban problems and challenges, not the 85%.