Is “Back-To-The-City” the New “White Flight”?

It’s a great question, posed by Richey Piiparinen in a post on his blog and re-posted to New Geography.  The question is prompted by Thomas B. Fordham Institute data showing that white folks are leading the human migration from suburbs back to the urban core.  For example, the percentage of whites in Philadelphia’s downtown zip code 19123 increased from 25% to 46% between 2000 and 2010.  A similar trend has been documented for Washington DC (zip code 20001) and Brooklyn (zip codes 11205 and 11206).

Piiparinen characterizes this  “white infill” as an inversion of the 1960s movement of whites out of the urban core to the suburbs.  This time, however, the consequence for the core is not urban decay but gentrification.  And for those non-white folks living in the core who are not displaced by gentrification there’s very little evidence that rejuvenation is raising their economic boats.   The poverty rate in Washington DC’s 20001 zip code, for example, has stayed at a constant 28% between 1980 and today, and the child poverty rate of 45% is twice what it was in 1990. 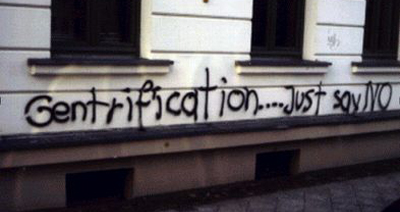 Piiparinen suggests that New Urbanists and other leading urban thinkers and “placemakers” have failed to consider this situation or, perhaps more commonly, have simply taken race- and class-based segregation as inevitable.  Alternatively, Piiparinen seeks a conversation about it.  When will we start talking about “equitable investment” in urban cores?  What might “real economic restructuring” capable of delivering social equity look like?  Do we have the collective will to “re-urbanize” in ways that prioritize “human and community capital” and create more opportunities for more people?

A couple of days after Piiparinen’s essay appeared in New Geography there was a story in The Denver Post about re-development  of the city’s historically black Five Points area. Clarkson Green is the first build-out of the Five Points Redevelopment Plan.  This residential project advertises single family homes priced from $696,000 to $735,000.  Townhomes will go for $475,000 to $525,000.  The target demographic for these residences–in keeping with the trend in other cities–is almost certainly the white folks who’ve been moving into the neighborhood.  According to Fordham Institute data the Five Points zip code of 80205 has one of the fastest gentrification rates in the country.  Between 2000 and 2010 the white population share increased from 29.2% to 56.2%.  At the same time, the area’s poverty rate in 2010 is estimated to have changed barely at all from the 31.5% recorded in the 2000 census.  Citi-data.com suggests that the Five Points poverty rate currently sits somewhere around 27.0%.  Various reports (e.g., here and here) substantiate the accuracy of this estimate. Colorado’s child poverty rate, like Washington D.C.’s, has also nearly doubled in the last ten years with Denver’s urban core leading the way (the child poverty rate for Five Points was 34% in 2000).

Thus, Denver is experiencing the same kind of white infill as other cities, with the same pattern of socioeconomic effects and non-effects.  Is this disparity on anyone’s radar screen?  Is there any more “collective will” in Denver to do something about the perpetuating inequalities?  Not really, if comments from Denver city councilman Albus Brooks at the Clarkson Green groundbreaking are any indication.  After acknowledging the area’s gentrification rate, Councilman Brooks avoids the implications.  Instead, he gives a shout out to retailers that “People are here, and they are ready to spend money.”