Placemaking talk is everywhere these days.  So too is “creative class” talk.  Richard Florida—formulator of the creative class concept—combines them in a recent essay for Urban Land.  Many people are on board with the notion that quality of place has something to do with urban vitality and creativity.  We aspire to urban settings that are appealing and animated, inspire innovation and risk-taking, and stimulate the economy by producing new businesses.

Complicating these discourses, however, is the undeniable fact that social and economic inequality is at record levels in the United States.  As Florida himself notes, American society is becoming increasingly class divided. Only about one third of American workers are employed in the creative class fields of science, technology, business, management, health care, law, arts, culture, design, media, and entertainment.  The other 66% are employed in personal care, retail sales, and food service.  Their ranks are expanding and, as Florida also notes, there’s a powerful racial dimension to this class division. 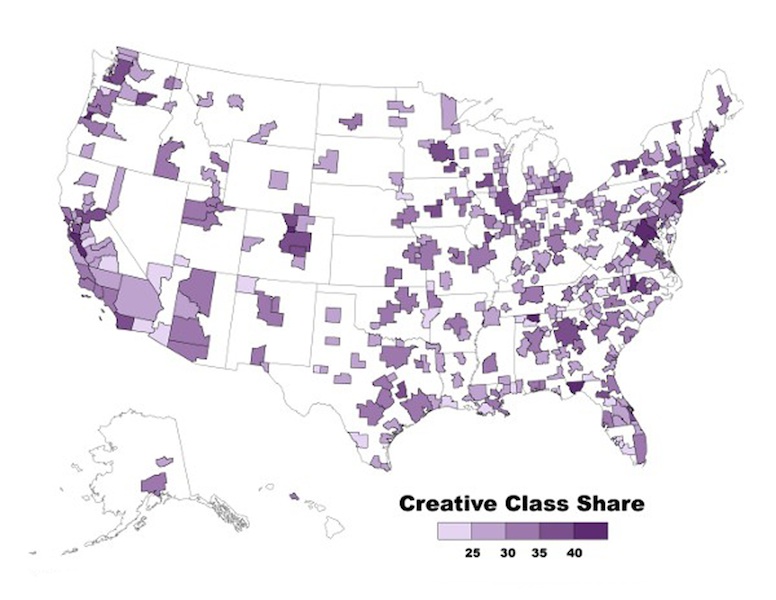 Creative Class Share of the Workforce (Bureau of Labor Statistics)

For cities, deepening social inequality is translating spatially as increasing residential segregation. As summarized by Emily Badger, a recent Pew Research Center Report on “The Rise of Residential Segregation by Income” found that

In 1980…85 percent of census tracts in America were either predominantly middle-class or mixed-income (this is a pretty impressive number). As of 2010, that figure had fallen to 76 percent. Today, considerably more upper-income Americans live in neighborhoods where the majority of their neighbors are upper-income, too (18 percent, up from 8 percent in 1980). And lower-income households are increasingly clustered in the same neighborhoods, as well (28 percent, up from 23 percent in 1980).

At the same time, the Pew Report notes (page 13) that

Thankfully we have observers like Neeraj Mehta, Research Director of the Center for Urban and Regional Affairs at the University of Minnesota, to remind us of what these social and spatial patterns mean for the placemaking enterprise.  Last month he had a nice post in Next City framing the key questions that all creative placemakers (and not just those who work their placemaking magic through the arts) should ask:

For whom are we trying to create benefit when implementing our creative placemaking strategies?… Which people do we want to gather, visit and live in vibrant places? Is it just some people? Is it already well-off people? It is traditionally excluded people? Is it poor people? New people? People of color? 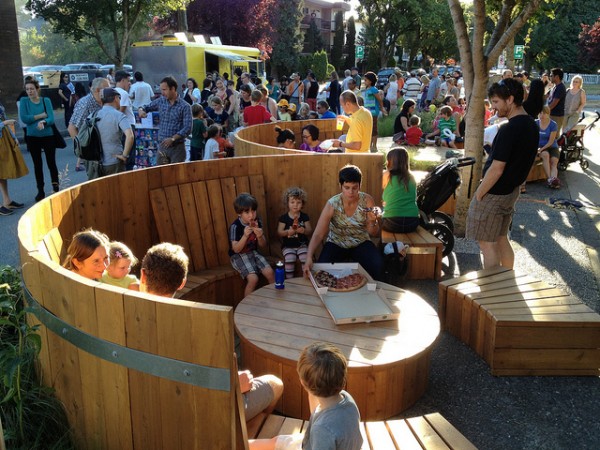 “Hot tub parklets are dandy, but for whom are we building them?” (Mehta, Next American City. Image credit: Paul Krueger on Flickr)

Creative-minded people enjoy a mix of influences. They want to hear different kinds of music and try different kinds of food. They want to meet and socialize with people unlike themselves, to trade views and spar over issues. A person’s circle of closest friends might not resemble the Rainbow Coalition—in fact, it usually doesn’t—but creatives want the rainbow to be available.

But while Florida extols the virtues of “accessible diversity” as a means to stimulate creativity he says some things about the desired physical quality of creative places  that may not square with the goal of culturally-inclusive placemaking:

Authenticity—as in real buildings, real people, real history—is key. A place that’s full of chain stores, chain restaurants, and chain nightclubs is seen as inauthentic. Not only do those venues look pretty much the same everywhere, but they also offer the same experiences you could have anywhere.

It seems to me that “authenticity” can easily serve as code for the kinds of upscale restaurants, retail outlets, and other amenities enjoyed by white, middle-to-upper class culture. And, it can easily price people of color out of urban settings where their involvement is otherwise required if creativity is to be stimulated.  At the very least such establishments often manifest a set of visual symbols or “cues”—Mike Davis might use the term “archisemiotics”—that signal who’s welcome in a way that can work against social mixing.  The chances of encountering The Rainbow is undoubtedly higher in places that judiciously meld “authentic” creative class desires with the “value alternatives” required (if not altogether desired) by the majority urban underclass. 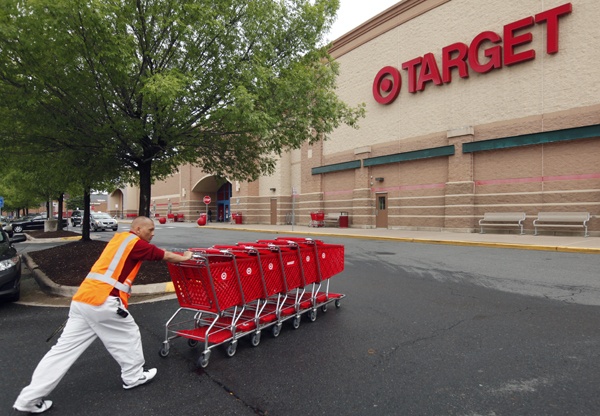 Experience says the creation of such hybrid settings—at least here in Denver—is not going to be easy. For example, the exercise in placemaking  at 9th and Colorado that we’re following on this blog has generated great local resistance to accommodating the sorts of value shopping alternatives that attract “The Other.”  This, despite the fact that ethnic and class diversity in the trade area is palpable.  Specifically, 16% of residents in the primary zip code in which the 9th and Colorado development is located are in poverty. This puts the area in the low to middlin’ range of urban poverty if we accept Pew Economic Mobility Project definitions of low poverty (less than 10% of the population live in deprivation) and high poverty (more than 30% of the population live in deprivation) neighborhoods.  The three Denver neighborhoods immediately adjacent to the 9th and Colorado site together contain around 10% lower income households, a number that’s consistent with what the Pew Residential Segregation Report (quoted above) considers typical for the nation as a whole.   Thus, better-heeled citizens in the re-development area have exposure to income (and ethnic) diversity but they’re still not keen to pay much placemaking attention to it (nor are their elected city councilpersons).  Interestingly, I’ve noticed that the most vocal local opponents to the kind of development that might attract social diversity are people who work in the arts and other creative class industries.  Thus, the “tolerance for strangers” that Bonnie Menes Kahn (referenced by Florida in his Urban Land piece) says is an important hallmark of cosmopolitan culture doesn’t seem particularly well-developed in this part of Denver.  Nor is it likely to be well-developed elsewhere in the city: Denver’s overall Residential Income Segregation Index (RISI) rose 21 points between 1980 and 2010, a rate of increase exceeded only by three cities in Texas:

Richard Florida has done great work to track the growing social and economic inequality of American society. Now, creative placemakers need to acknowledge the existential reality of the urban underclass when devising their schemes, and not simply that group’s potential to serve as a conceptual foil for the creative pleasure of cultural elites. By now it should also go without saying that all community stakeholders–including those representing the urban underclass–should have a place at the table when discussing placemaking alternatives. Neeraj Mehta nicely articulates the challenge:

We need to create an explicit pro-equity agenda to our creative placemaking efforts [and] be explicit about who benefits from the beginning… It’s really an issue that all of us working on ways to build stronger, healthier communities should be willing to ask, over and over again.