Appropriating Jane Jacobs, or What Would Jane Think? 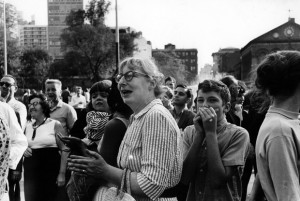 The debate about development at 9th and Colorado in Denver that we’re following on this blog has, by all accounts, generated a considerable volume of email to Denver City Councilors.  The website Stop Walmart on Colorado Boulevard recently published one email message under the title “Jane Jacobs vs. Robert Moses/Fuqua vs. The Neighborhood.” The author writes to Denver Councilwoman Jeanne Robb:

When you consider this project I suggest that you revisit Jane Jacobs and her successful fight against the Lower Manhattan Expressway which was being pushed by Robert Moses in the 50’s.  Moses’ “vision” was to build an expressway through the middle of Manhattan and eliminate what he thought were blighted neighborhoods.  Jane Jacobs’ “vision” was to preserve an urban environment by fighting for the survival of urban neighborhoods.  Imagine what Manhattan would be if Moses’ vision had been built and ask yourself; who was the visionary.  Was bigger better?

I know this not a preservation issue, but instead, it is about how you create a new urban environment and, with respect, the Fuqua development is reactionary not visionary and does not create an urban environment.  The Big Box answer is the model that has been followed for years by countless developers across the country and has led to a landscape littered with big box stores.  Jane Jacobs felt that diversity was the heart of an urban neighborhood.  Walmart and other chain stores do not give us diversity instead it is gives us more of the same.

I would argue that much of what the City has done in other neighborhoods would be applauded by Ms. Jacobs and that is why I am disappointed with the current proposal, which is applying old solutions.  I would suggest that you and your colleagues revisit her writings.  It will remind you of why you love this city and hopefully lead to better choices.

I’m not sure that this letter gets Jane Jacobs exactly right, or is entirely contradiction-free. Jacobs championed the city in all of its messiness and diversity, meaning human diversity and not simply retail diversity. I think that’s why Jane would have been repelled by the neighborhood’s first—and arguably most honest—reaction to the Fuqua Development proposal, which was to disparage the “element” of humanity that works and shops at Walmart, and would be drawn to the neighborhood if a Walmart were built.  Condemned by others as elitist, neighbors have since tried to repudiate these unfortunate comments.  But you can’t put this stuff back in the bottle once it has spilled out. Certainly, neighbors have continued to press for “upscale” as opposed to “downscale” development.  I don’t think it would occur to Jane Jacobs to frame a choice of neighborhood vision in upscale/downscale terms, let alone force a choice between one or the other.  Indeed, on matters of class and color neighbors sound much more like Robert Moses than Jane Jacobs.

Jane Jacobs was a champion of mixed income neighborhoods. She valued historic preservation for the opportunities it provided to create affordable housing.  Thus, I suspect that she would hate what Denver has done in many of its “revitalized” historic neighborhoods where preservation and adaptive re-use have served to displace minority populations, gentrify the area, and ethnically homogenize the population.  Because Jacobs wrote lovingly about mom-and-pop stores I suspect that she would abhor super-sized Big Box retailers as we know them today. But she was certainly familiar with the concept of department store.  Thus, I suspect that she would not summarily exclude an urban-scaled Big Box from the discussion if incorporating it had other conceivable neighborhood benefits—like making city life more affordable for the underclasses that live there.

Finally, Jane Jacobs saw the city in holistic, ecological terms; i.e., as a complex living organism whose individual neighborhoods were vital parts of a larger, interconnected whole. She understood that urban ecologies, like other ecologies, inevitably change and evolve. I don’t think that she would be stuck on preservation for preservation’s sake. I’m pretty sure that Jacobs would focus the discussion of a blighted site like 9th and Colorado on place-making writ large and in all of its complexity, and not just on any single element.  She would take a long, birds-eye view and leverage community power to generate an alternative plan that is inclusive of age, income-level, ethnicity, and other diversities, and that considers 9th and Colorado from the standpoint of urban interconnectedness. 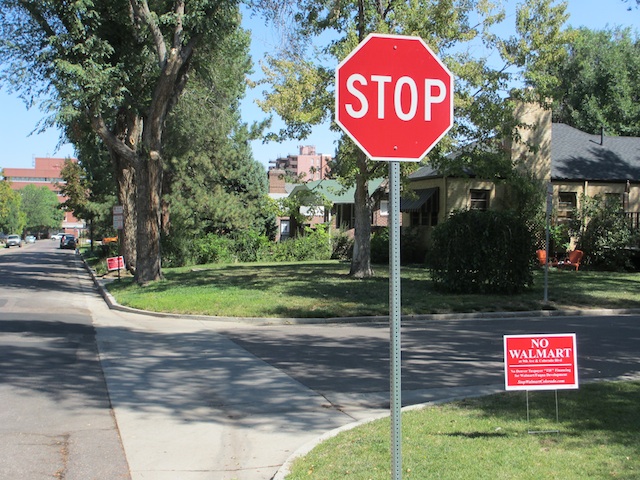 Stop Walmart signs in the Hale neighborhood, with the development site in the background  (D. Saitta)

Denver today is not the New York of sixty years ago.  However, the worry about viewpoint superficiality that Jane Jacobs expressed in The Death and Life of Great American Cities is still relevant:

It may be that we have become so feckless as a people that we no longer care how things work, but only what kind of quick, easy outer impression they give. If so, there is little hope for our cities or probably for much else in our society.

Likening the dispute between Fuqua Development and the Neighborhood to the one between Robert Moses and Jane Jacobs does not honor the great urbanist’s wisdom, memory, and legacy.