Water is a key resource constraint in urban development, especially here in the West.  Because of projected population growth—anticipated to double to 10 million people by 2050—Colorado is predicted to have a municipal and industrial water gap by at least 2030.   The gap is already emerging.   Climate change and the significant probability of drought add uncertainties that further complicate urban hydro-sustainability.  Moreover, aging infrastructure  will need replacing if the water that’s already available is to be efficiently delivered to its intended destinations. 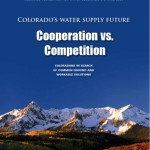 Collaboration between state entities that deal in water will be key in meeting future water needs.  A major step in this direction was taken in 2005 with the formation (courtesy of Colorado HB 05-1177) of the Interbasin Compact Committee (IBCC).  The IBCC broadens the range of stakeholders actively participating in the state’s water decisions and creates a locally driven process where the decision-making power rests with those living in the state’s river basins.  The committee is committed to working with four strategies for creating a sustainable water future, encapsulated by a “4 legged stool” metaphor: (1) local projects involving  already developed water, (2) consumer conservation initiatives, (3) tapping of new water sources, and (4) agricultural-urban transfers.  Sustainability will depend on how well these strategies are mixed and matched. Other state bills like HB-08-1141 mandate that developers receiving building permits provide local government with better and more complete information regarding adequacy of the project’s proposed water supply.  Finally, earlier this year 35 water providers, towns, and ski resorts signed a historic Colorado River Cooperative Agreement to partner on a holistic approach to responsible water development that will benefit both the western and eastern slopes of Colorado’s Rocky Mountains.

As reported elsewhere in this blog, Business School colleagues and I have a research grant from DU’s Institute for Enterprise Ethics  to examine urban hydro-sustainability along Colorado’s Front Range.  Our team has been combing the literature and interviewing subject matter experts as a way to get a handle on the issues, and with the ultimate aim of making policy recommendations from a particular interdisciplinary perspective that integrates anthropology and real estate.  In deference to our sponsor we’ve also been thinking about the ethics of water management as it pertains to the four strategies identified above. Are some strategies better ethical choices than others?  To organize our research and reporting we’ve established a website called Peak-Water. Although describing Colorado’s current situation as “Peak Water” is perhaps overly alarmist given the current supply (which by some estimates is capable of supporting the basic needs of three times the current population) the concept is nonetheless useful for reminding people about the importance of careful water planning and collaboration.  As several interviewed experts have noted so far, too often there’s a serious disconnect between planning for people and planning for water. 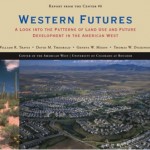 My personal interest in our project focuses on the relative merits of different urban design and built environment models for supporting hydro-sustainability.  Western cities are known for sprawl, and we’ll likely see more of it in the future given the tenacity of the particular cultural values that have driven it in the past. As the  Center of the American West reported in 2005:

…there’s reason to believe that a lot more development is coming. The West has grown faster than the country as a whole for much of the last century, and is likely to outpace national growth for the foreseeable future. The “New West” [emphasis added]  is increasingly attractive to migrants and to investors. Western land owners will certainly continue to respond to market forces, and to their own preferences, by transforming lower value land uses, like agriculture, into more financially-rewarding options like subdivisions and shopping malls. Finally, Westerners will continue to buy homes in suburbs distant from city centers and to build second homes in the forests and on ridge tops. They will demand highways, water systems, and other utilities. They will also continue to complain about the sprawl, traffic, interrupted views, and lost sense of community that growth brings. 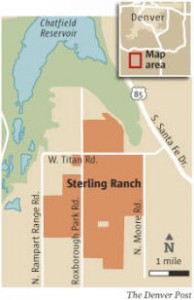 In other words, people captivated by what David Brooks has called the “Paradise Spell” will continue to seek freedom and fortune in the American West.  The result may not be your granddaddy’s sprawl, however.   We’re beginning to see planning for exurban development that is much more environmentally conscious and water-wise.  The project at Sterling Ranch located southwest of Denver is foremost among them. The plan for Sterling Ranch is akin to what Ebenezer Howard described as a Garden City.   It’s nearly identical in size (around 30,000 people) and broadly similar in form.  A dense, mixed use town center will softly transect outward into tightly knit villages and end in rural, hillside ranchettes. 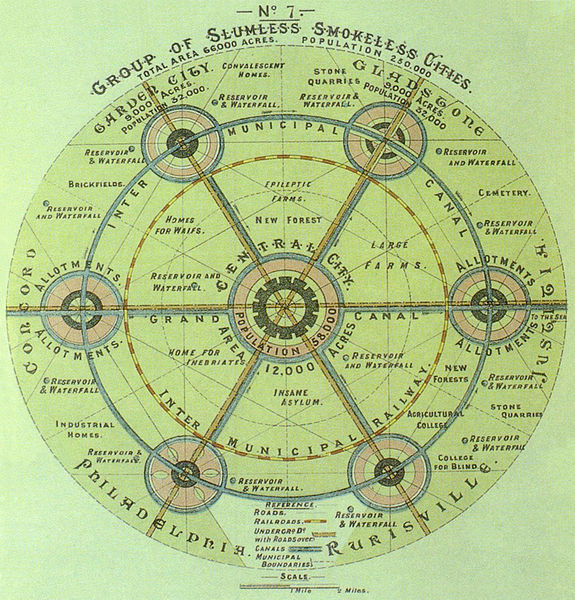 Howard’s Model of the Garden City

Sustainability is the explicit design principle at Sterling Ranch.  The development will employ pioneering  water conservation measures, including rainwater harvesting (as per Colorado HB 09-1129), to support its 12,000 housing units and 31,000 people.  The estimate of water use per household is approximately one third of that traditionally required by Douglas County (.22 acre feet per household per year compared to .75).  At present Sterling Ranch developers are partnering with Denver Botanic Gardens in a “Community Supporting Agriculture” test case for evaluating whether the community’s fresh produce needs can be met locally instead of bringing fruits and vegetables in by truck.  In keeping with New Urbanist commitments local landscape and history will be respected in the project’s development, and a range of housing types and prices will be available (35% of the house product will be priced below $200,000).  Promotional material for Sterling Ranch riffs on a New West theme:

The New West retains the rugged personality, and natural beauty of the Old West, but has evolved to suit the lifestyles of today’s Westerners. Sterling Ranch provides plenty of opportunities to ride, run and play in natural settings, along with the sense of community that was once necessary when neighbors survived by working together. At the same time, it offers conveniences of modern life and a community that reflects today’s society and real-world conditions.  From a comprehensive water plan that ensures enough water for all; housing options that meet the needs of today’s buyers; public spaces that bring communities together; schools that teach skills the next generation needs to succeed; and Community Supporting Agriculture that grows food for our tables–Sterling Ranch creates a vision for the New West.

Sterling Ranch represents a noble vision and is an experiment worth monitoring.  Other Front Range developers certainly will be watching.  Assuming some success, the question will arise of  how many Sterling Ranch-style garden cities can the Front Range accommodate?  And, will this land use pattern promise any greater long-term environmental and social sustainability than, say, mid-to-high rise densification projects in the urban core, especially those that choose to experiment with vertical farming?

Front Range urban hydro-sustainability prospects are also complicated by the fact that water isn’t the only relevant variable affecting Western development. Peak Oil suggests, at least to some, that efforts to preserve our current way of occupying the landscape through technological innovation are doomed and that urban contraction is the only sustainable planning choice.   If there’s no significant energy savings associated with  transporting water horizontally to a population distributed in exurban Garden Cities as opposed to one that’s distributed in a high rise (Radiant City?) urban core, then contraction and vertical densification would seem to be the better bet.

There’s also the matter of Peak Population, especially as concerns ethnicity and age.  Sterling Ranch will undoubtedly attract a particular demographic that is white, middle-class, and nuclear family-based—and that’s OK.  But Colorado is clearly becoming increasingly diverse in terms of ethnic makeup.  As recently reported by North Forty News, Colorado’s Hispanic population increased by 41% over the past decade.  The African-American population rose by 19%.  The Asian population is up 45%.  In contrast, the white non-Hispanic population grew by 10%.  These increases occurred throughout the state and not just in metropolitan areas.  Will domestic minorities be drawn to communities like Sterling Ranch, or any other urban development, if cultural diversity is not a central planning and design concern? 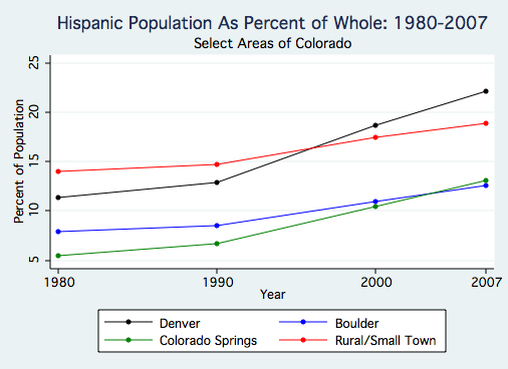 We’re seeing the aging of Colorado’s population as well. The number of people over age 65 is predicted to increase 78% over the next 15 years, with the proportion of the total population moving from 9.8% to 17.4 %.  According to a survey by the National Association of Realtors that was reported in a recent New York Times op-ed, this aging “Boomer” population (born between 1946 and 1964) favors walkable urban downtowns, suburban town centers, and small towns.  Interestingly, the Times piece reports that the coming-of-age “Millennial” population (born between 1979 and 1996) appears to be favoring (by about one-third, according to various estimates) precisely the same kinds of settings for lifestyle reasons and for the convenience of not having to own cars.  These data suggest that we’re witnessing a major structural and demographic event: “the convergence of the two largest generations in American history” in preferring walkable, mixed-use, and centrally-located neighborhoods.

Thus, Peak Oil and Peak Population, insofar as Colorado is concerned, may be recommending a future that is traditionally urban and Old European, rather than exurban and “New Western.” It remains to be seen whether Peak Water is pointing in the same direction.  If it is, then urban planners and architects are facing a significant planning and design challenge for a Peak Planet age: how to make a time-honored, traditional form of settlement much more environmentally and interculturally attractive and sustainable.