The question of my title is the one I’m asking myself after attending public presentations by four planning and design firms invited to the University of Denver (DU) as finalists for a project to improve physical and social connections between the campus and neighborhood. All are global firms, and all specialize in master plans for higher education. The finalists were presented to us by our administration as “some of the greatest urban design thinkers on the planet.” There’s no reason to dispute that assessment. Thus, this was an interesting opportunity to see what happens when world class design firms pitch to a prospective client. I should note that my perspective is limited. I attended all four hours of public meetings. However, our Urban Studies faculty weren’t represented on the firm selection committee, so we didn’t have access to formal written proposals or other application materials.

The planning and placemaking challenge at DU is akin to that facing other universities whose neighbors see the academy as an Ivory Tower detached from community. Although DU is a private institution, our vision is to serve the “Public Good.” Thus, it’s important to engage in meaningful ways with the surrounding neighborhood and city, and welcome people in. The photographs accompanying this essay illustrate several physical dimensions of the problem. Campus is bounded on two sides by broad, pedestrian-unfriendly four lane boulevards with another one cutting right through the middle. The street frontages between campus and community have a decidedly suburban strip mall character, or consist of surface parking lots. The adjacent light rail station is devoid of amenities and dominated by a parking garage. An Urban Land Institute Advisory Services Panel report describing these and other challenges was sent to prospective applicants along with the university’s Request for Proposal (RFP). The ULI report suggested a few basic physical interventions: narrow the streets, clearly mark the campus gateways, create better lighting and signage, and activate the edges. It also suggested “multiculturalism” as a central theme for an organizing design strategy, although it didn’t elaborate on what this means and how it might take physical expression. 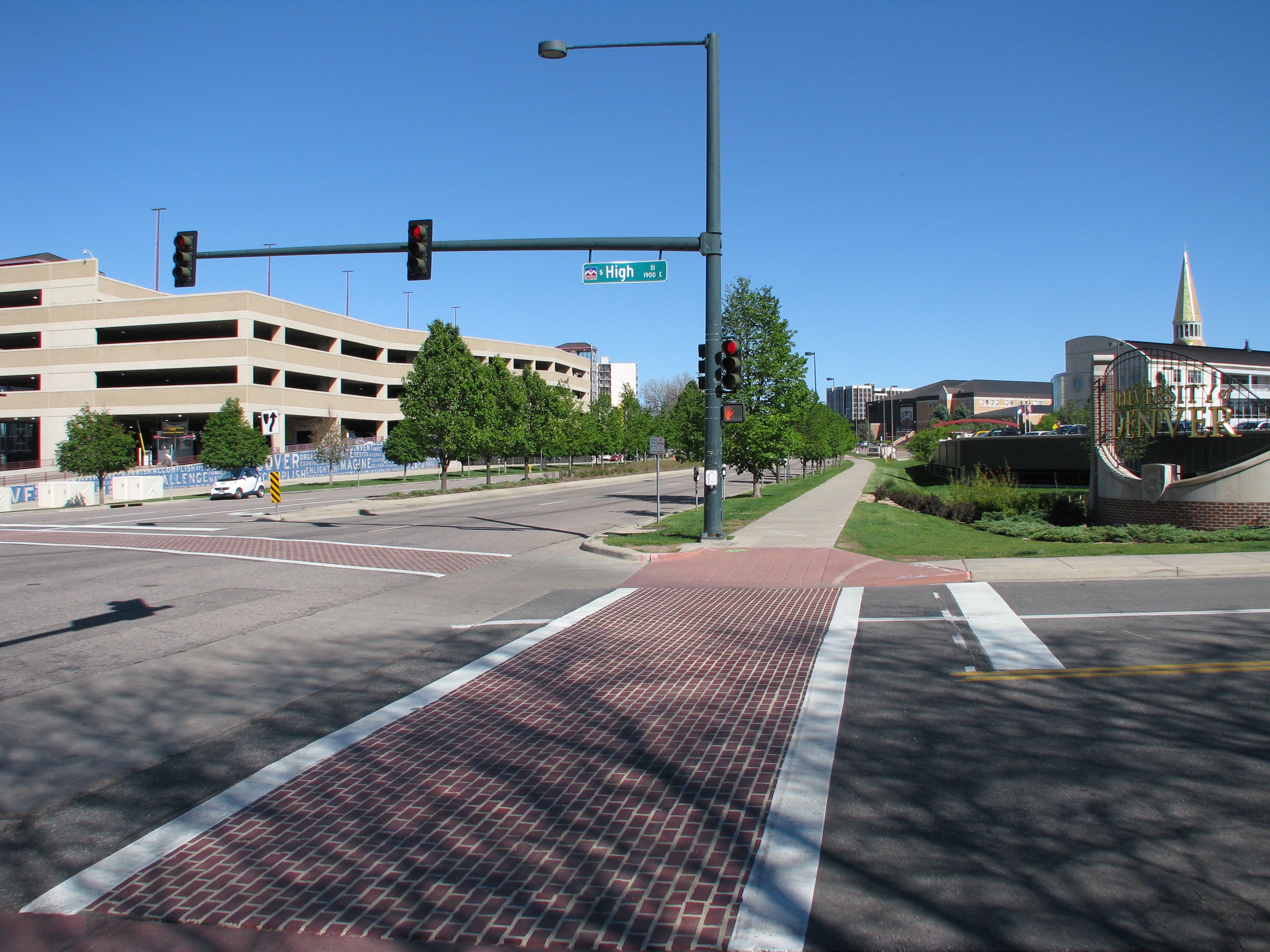 Boulevard at the Northern Boundary of Campus. The DU light rail station parking structure is visible at Left. (Image by Dean Saitta)

All of the design firms played off of ULI recommendations and the University’s RFP in very similar ways, right down to the language used. We heard a lot about “mixed use,” “catalytic activity,” “vibrant streetscapes,” and the importance of “creating an experience.” The affordability of new residential housing for students and younger faculty was rightly highlighted. The usual Big Thinkers were invoked, most prominently Jane Jacobs and Richard Florida (The Rise of the Creative Class Florida, not The New Urban Crisis Florida). All of the firms promoted a vision of “tech hubs” or “tech labs” as placemaking anchors, thereby privileging what many universities are doing around STEM education to better prepare students for an “innovation economy” and, frankly, to distinguish themselves in a very competitive higher education marketplace. A close second priority was better integrating our academic programs in engineering, business, law, and other professional schools.

Commitments to New Urbanism and Tactical Urbanism were on display. We heard a lot about “live/work/play” spaces, and how various kinds of experimental “pop-up” projects can be used to test placemaking concepts. We heard more than once about Farmers’ Markets and Food Trucks. Pocket Parks made an appearance. The firms were not bashful about identifying the “cool places” (and their associated “vibes”) in Denver that make it one of the nation’s most attractive Destination Cities, and that can serve as models for a “DU [Innovation] District.” When an audience member asked the experts what the campus is already doing that’s good, one mentioned the Adirondack Chairs that were recently placed on campus greens. This tells us how far we have to go. 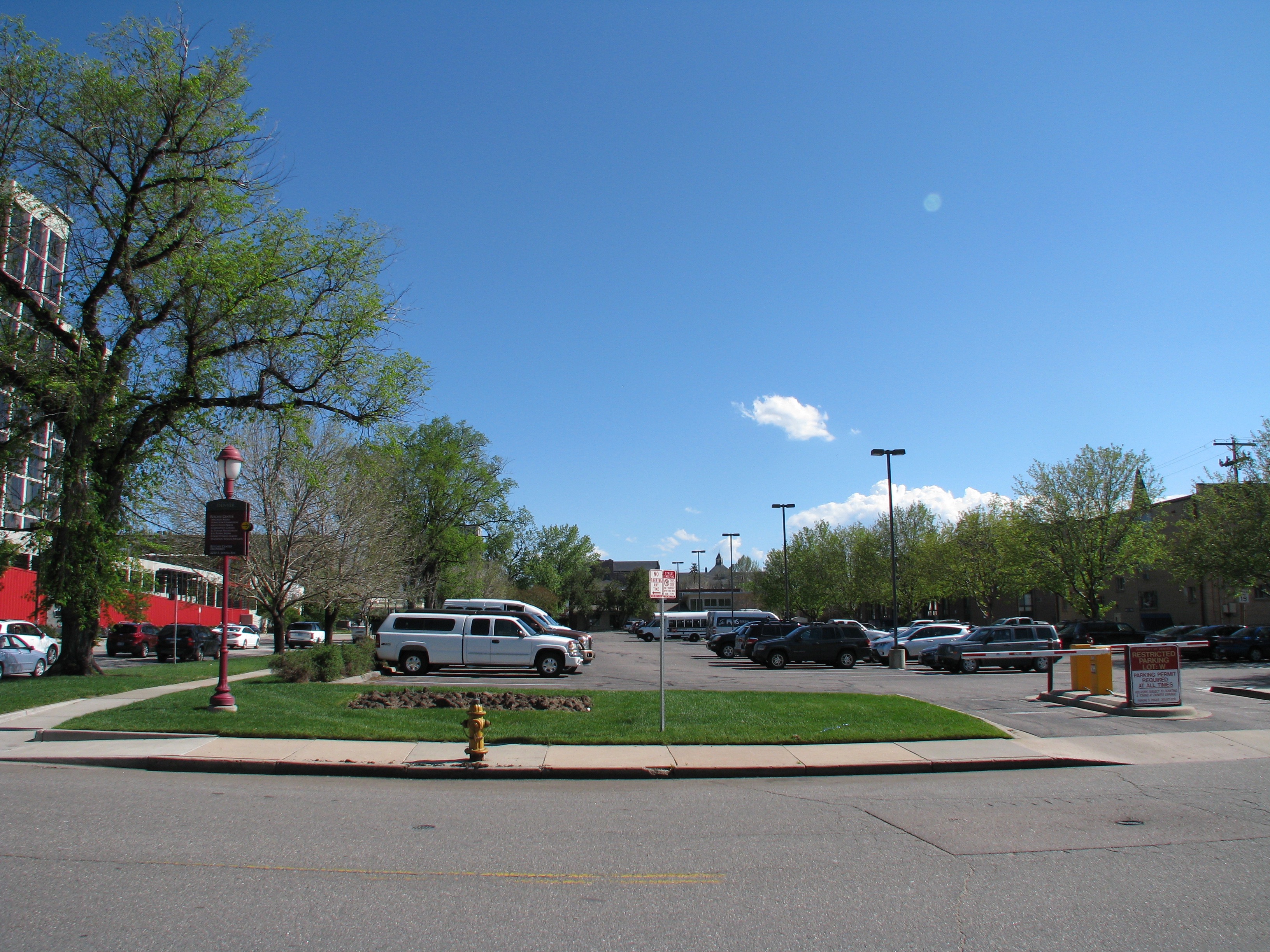 A surface parking lot on the eastern edge of campus. (Image by Dean Saitta)

Differentiators of planning and design philosophy were few and far between. One firm didn’t mention faculty as a key campus constituency, which was a terrible mistake. Another firm celebrated its impressive data base of campus master plans from all over the country, although it wasn’t entirely clear what’s to be learned from these comparisons. A couple of firms channeled the Denver Union Station metaphor that our academic leaders routinely use to envision our future as a crossroads for people on journeys of discovery. However, Union Station is much better known for its Terminal Bar and trendy restaurants than anything else. One firm mentioned that “place grows from context,” but no real examples were provided of what that would look like in this particular case. One bit of context would be the university’s location on Cheyenne and Arapaho ancestral land, but nothing was said that suggested an awareness of that deep indigenous history or the extraordinarily painful period of contact with white settlers, including DU’s founder. Other contexts can be found in the area’s more recent Euro-American history. In the early to mid-20th century DU was known as Tramway Tech, a theme that could be picked up in re-imagining the campus Light Rail station.

Come to think of it, the Denver area has always been a locus of interaction between different cultural groups. An attending staff member at one firm began to get at this point when he suggested, almost inaudibly from the stage’s edge, that “people use space in different ways.” This might have been the most important comment I heard during the entire four hours of public meetings, but it was left unexplored. Absent a substantive engagement with cultural and historical context, the most obvious differentiator between the firms was their style of public presentation. Some firms were much more participatory than others in soliciting opinions from audience members about what they would like to see in a regenerated campus neighborhood. 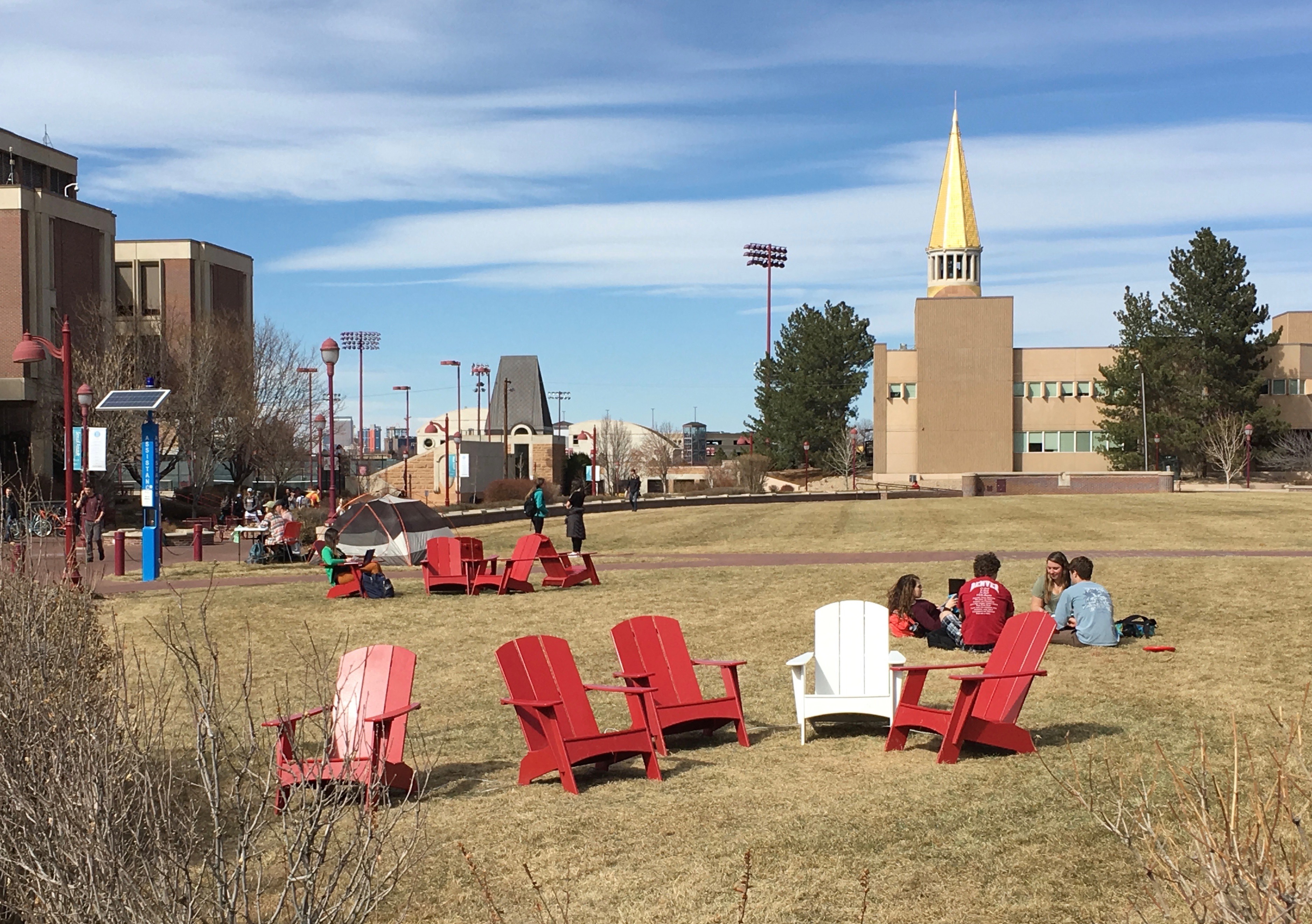 In fairness, the lack of obvious differentiators was understandable. All firms want to be guided by planning ideas offered by the campus and neighboring community. However, none of them gave any real indication that “community” is plural, except for the one staff member’s comment described above. Nor did any indicate that we might want our university neighborhood to draw visitors from other neighborhoods that aren’t populated by white people. None indicated the role that a liberal arts education—as distinct from professional training—could play in producing STEM innovation. Ideas for using culture and the arts as anchor venues for campus edges (e.g., a museum, art gallery, cultural center, or some other kind of learning lab or Idea Store) were not mentioned. None took up the multicultural theme briefly mentioned in passing by ULI, and what this might mean for the quality of public space, green space, public art, signage, historical markers, amenities, and residential housing. The commitment to multiculturalism—or, alternatively, interculturalism—should certainly amount to more than just making signs in Spanish as well as English.

A discussion of architecture was also conspicuous by its absence. Following a severe financial crisis that nearly destroyed the university in the 1980s, architecture was instrumental to DU’s renaissance in the 1990s. Thus, we’ve learned that architecture is crucial for realizing placemaking goals. It was an audience member at one meeting who probably spoke for more than a few attendees when she pleaded for greater diversity and creativity in the campus’s architectural program. New campus architecture since the 1990s has closely conformed to an aesthetic oriented toward unity and harmony, one often described as “Collegiate Gothic.” It might be time to disrupt that program, in keeping with the wider social and economic disruptions associated with STEM education and, especially, “STEAM” education if we’re keen to add arts to the interdisciplinary mix. Or, in keeping with Denver’s complex and dynamic cultural history. We recently missed an opportunity to make a novel architectural statement with a new Engineering and Computer Science building (see photograph below). The image projected by this big, muscular brick building is, in my view, more autocratic than collegiate…although it does have Adirondack Chairs out front. 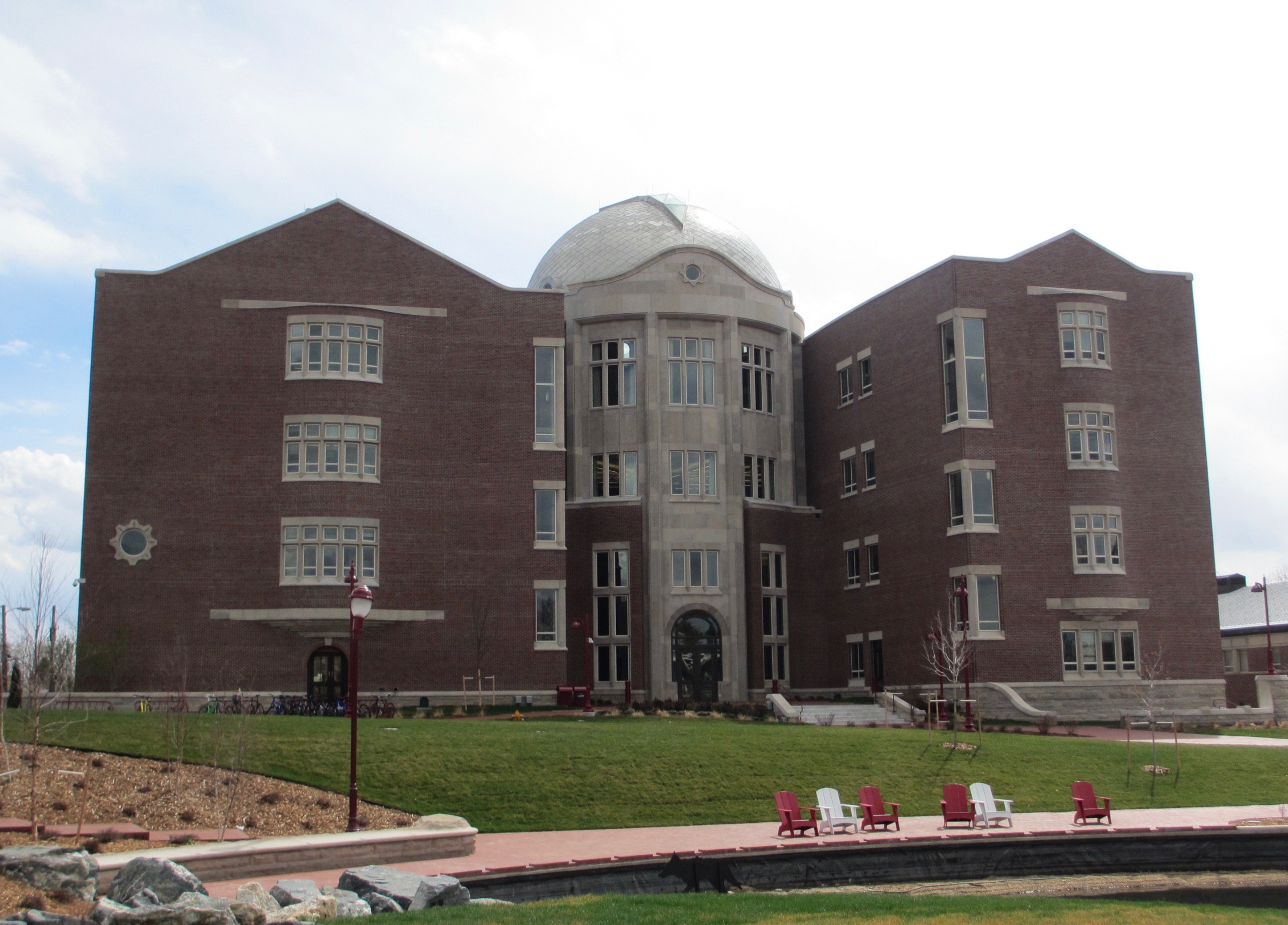 The School of Engineering and Computer Science, University of Denver. (Image by Dean Saitta)

Campus boundary work presents us with another architectural opportunity to generate not only functional built space, but also something about the meaning of a University of Denver education. We shouldn’t miss it. The design firms were no doubt aware that DU has a strong international profile. We’re a national leader in sending undergraduate students on study abroad, and we have healthy international enrollment in our graduate programs in engineering, computer science, and business. It’s also no secret that the university is challenged by our lack of domestic ethnic diversity. Thus, for me the key placemaking question, and the primary design challenge, is the following: What’s an appropriate edge architecture for signaling to the neighborhood, the city, the nation, and the world that this is an institution dedicated to innovation and boundary crossing, in ways that resonate with faculty, students, and citizens of diverse cultural backgrounds?

The lack of compelling design firm differentiators apparent from these public meetings got me wondering about the small, hungry, and potentially more innovative firms that submitted proposals but didn’t make the cut. Perhaps “greatest in the world” isn’t always the best menu from which to choose. But that ship has sailed: the winner of the master plan competition was announced a couple of weeks ago, and last week began their public meetings to receive campus input.  Interestingly, the chosen firm, in my opinion, is the one whose presentation most implicated the project as an exercise in neoliberal economic development. The firm that seemed most sensitive to issues of context and cultural diversity was among the three that were eliminated. But all four of them reminded me of Margaret Crawford’s perceptive comment on James Russell’s provocative analysis of “bogus placemaking“:

Placemaking…is a questionable concept in so many ways. One [way]…is by dismissing architects and urban designers. But a more troubling problem is that their techniques lend themselves so easily to what George Lipsitz calls “The White Spatial Imaginary.” Although they nod to “diverse” places, their concepts are clearly addressed to creating “feel good” public spaces without acknowledging the real racism that exists in urban space. Good example: they love Bloomberg’s Broadway chairs and tables but never say a word about his “Stop and Frisk” policy, a way of denying public space to almost unbelievable numbers of minority males…

Crawford’s comment might not be strictly applicable to what we’re doing at DU. Thus, I might be guilty of taking a very cheap shot. However, our very few minority faculty members and students, and our fellow citizens in other neighborhoods, are the best judges of that. Certainly, Crawford’s comment has a renewed relevance in Trump’s America, and for that reason alone might be heeded going forward.

It’s also not too late to consider other metaphors and theories for guiding the campus planning and design effort. For example, if we’re interested in framing the university as a site of innovative teaching and learning that’s open to cultural and intellectual diversity, the Corky Gonzales Library in impoverished West Denver is a much better metaphor for our aspirations than the revitalized Union Station, which is reasonably perceived as a monument to downtown Denver’s consumerization and “whiteification.” As I mentioned in a previous post, the university is an incubator of critical inquiry, not a surrogate for the Chamber of Commerce. At the very least, we need a thoughtful approach to placemaking that triangulates between the university’s public good vision, the ideas of multiple stakeholders and communities, and a theory of place, design, and architecture that’s responsive to cultural history, diversity, and meaning.