This has been a year of commemorating the 100th anniversary of Jane Jacobs’s birth. The great urbanist’s birthday on May 4th prompted reflections by notable biographers and scholars like Roberta Gratz and Saskia Sassen. In commenting on the larger body of centennial commemorations, Peter Laurence notes that “there are many Jacobites today, both fans and critics,” and that “how and why Jacobs is praised and criticized is important.”  He urges us to avoid myths, cartoons, intellectual shortcuts, and “well-worn ideological pathways” in how we present her ideas (e.g., see here). A new biography of Jacobs by Robert Kanigel that was presumably timed for the birth centennial, Eyes on the Street: The Life of Jane Jacobs, has been hailed by Richard Florida as one that avoids “St. Jane” hagiography.

One of Jacobs’s more controversial claims upon which scholarly criticism has been heaped was disclosed in a Wall Street Journal review of Kanigel’s book by John Buntin. In The Economy of Cities Jacobs challenged the longstanding archaeological consensus that cities developed only after agriculture appeared in both the Old and New Worlds. Alternatively, Jacobs argued that cities arose first among hunting and gathering people as craft and trade centers. Then, the growing density of these urban agglomerations produced the creative innovations that led to agriculture. Jacobs called the original (and still mythical) dense settlement of pre-agricultural peoples “New Obsidian.” The World Heritage site of Çatalhöyük in Turkey (7500-6000 BC) was Jacobs’s muse for this “Cities First” argument. An early expression of ostensibly urban life, Çatalhöyük is loaded with evidence of trade and craft activities.  It also contains hoards of obsidian and finished obsidian artifacts. 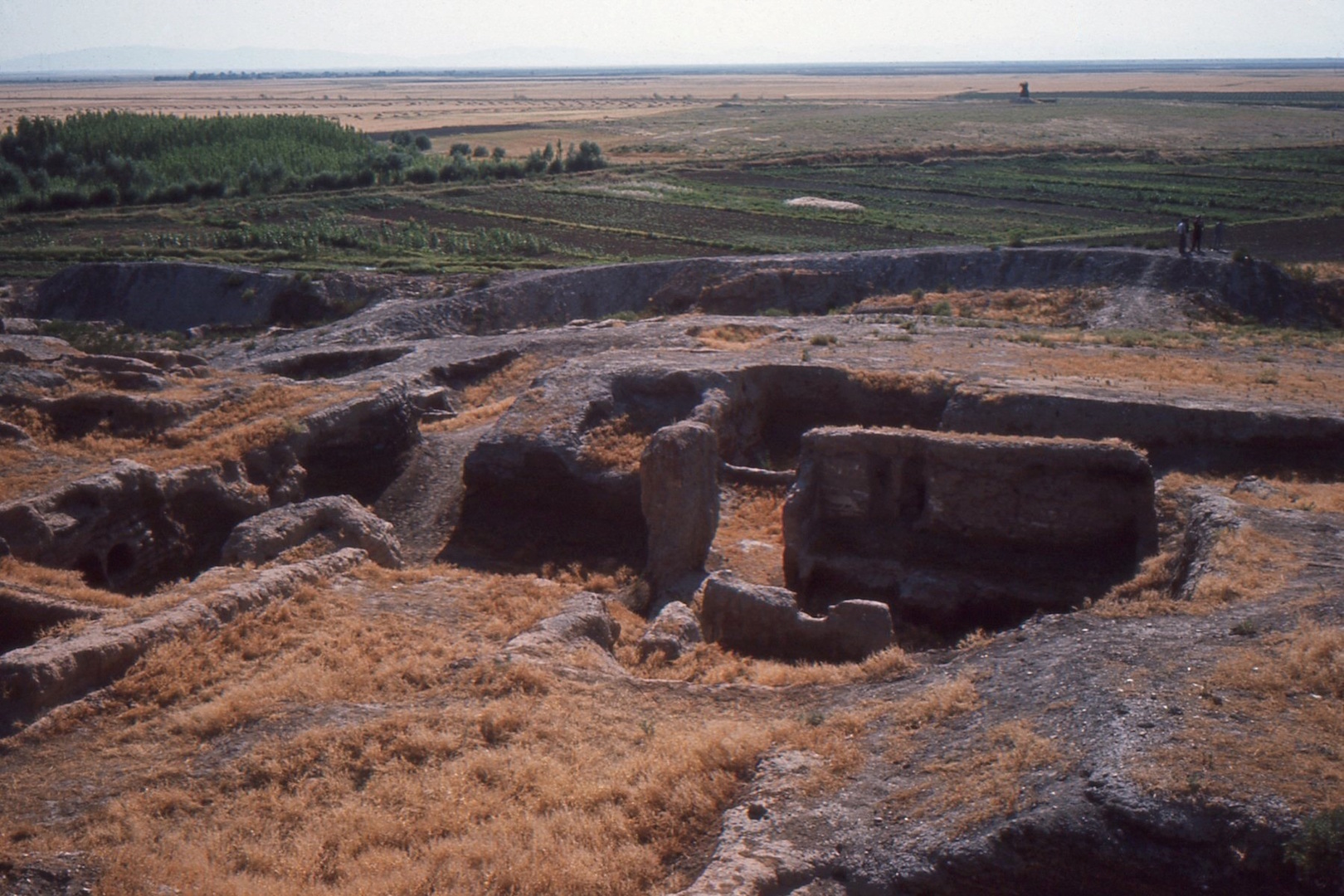 While the archaeological consensus about urban origins didn’t crumble in the wake of Jacobs’s theorizing—indeed, it was unnoticed or completely ignored by many scholars in archaeology—her formulation proved to be influential in other fields. The urban theorist and planner Edward Soja ran with it in his 2000 book Postmetropolis: Critical Studies of Cities and Regions, and in a book chapter available here. Soja doesn’t suggest that the consensus view be discarded, and in fact he notes that available archaeological evidence contradicts Jacobs’s claim. But he does suggest that “another course of originating events may also have been involved, unrecognized by scholars who have overly narrowed the definition of the city.” The geographer Peter Taylor isn’t so restrained. In 2012 he reaffirmed Jacobs’s original theory lock, stock, and barrel.

Professional archaeologists have been unsparing in criticizing these revived perspectives. Mike Smith, in a couple of posts on his wonderful Wide Urban World blog (see here and here) argues that Jacobs was flat out wrong about urban origins. Smith channels Çatalhöyük’s latest excavator, Ian Hodder, in identifying Çatalhöyük as “just a very large village.” He notes that Çatalhöyük’s appearance post-dates the initial stages of cultivation by a thousand years or so. Smith then editorializes a bit by suggesting that the perpetuation of Jacobs’s wrong idea:

...does speak eloquently about the decline in scholarly rigor today, and about the lack of respect for archaeology by some writers. People who ought to know better have been willing to accept interpretations about archaeology without consulting archaeologists or works, but solely on the authority of Jane Jacobs, who had no archaeological training or knowledge.

This is why, Smith suggests, archaeologists need to publish outside of archaeology—an opinion with which I wholeheartedly agree.

Other professional scholars and archaeologists, however, are a little more charitable than Mike Smith toward Jacobs’s Cities First idea. In fact, they’re inclined to preserve room for continuing to work with Cities First in some form. In his book The Ancient Mesopotamian City, Marc van de Mieroop suggests that despite the “total fallacy” of Jacobs’s statement that cities came first, she had a valid point when she stated that agricultural development benefited from urban stimuli. Monica Smith also notes that the Cities First model “requires modifications but still contains an element of truth in that cities provide significant boosts to rural productivity” by promoting certain efficiencies of cultivation. Finally, in his book Killing Civilization: A Reassessment of Early Urbanism and its Consequences, Justin Jennings is skeptical of much early thinking about Çatalhöyük’s urban status, but he does admit that the settlement was huge by standards of the Neolithic Near East. And, Jennings doesn’t completely break with a view of Çatalhöyük as urban where he describes it as an “aborted city.”

I support, with Mike Smith, the archaeological consensus on the relationship between agriculture and urban origins. At best, agriculture and cities evolved hand-in-hand in what Soja describes as a “mutually causal and symbiotic relationship.” But perhaps there’s still something to the idea of Cities First if we focus on cities not as things (or, products) but as processes. Peter Taylor outlines exactly that position in a published response to a formal critique of his work by Mike Smith, Jason Ur, and Gary Feinman. Alexander Thomas takes a broadly similar position in his book The Evolution of the Ancient City: Urban Theory and the Archaeology of the Fertile Crescent. Thomas argues that if we understand urbanization as the development of a trade network that allowed for urban production, then “urbanization predated the city by thousands of years.” There’s no question that Çatalhöyük was embedded in a long distance trade network. Ian Hodder summarizes:

Date-palm phytoliths at the site indicate that storage baskets were brought to Çatalhöyük from Mesopotamia or the Levant; shells suggest trade from the Red Sea and the Mediterranean; obsidian undoubtedly came from Cappadocia, a region about ninety miles to the northeast; oak and other timber must have come from at least as far as the nearest upland, six miles away.

Finally, Neil Brenner proposes that the concept of urbanization requires “systematic reinvention”: it must be reclaimed from “city-centric, methodologically territorialist, and predominantly demographic traditions that have to date monopolized its deployment.” There’s a lot packed into this bit of academese. But I take Brenner to mean that liberating the concepts of “city” and “urbanization” from traditional definitions, and exploring perspectives that are more fluid and relational, just might open up useful new ways of interpreting urbanism in the past and present. This would be completely consistent with a Jacobsian spirit.

Even if Çatalhöyük arose on an agricultural base, stuff was happening there that speaks to the evolution of something original. If that something wasn’t the “city” as traditionally understood, then perhaps it was the first stirrings of what Richard Florida has called the urban creative class. Ian Hodder notes that Çatalhöyük remains unique for the sheer amount of art, imagery, and symbolism that’s found at the site. The symbolism is everywhere, and it’s elaborated over and over again in the frequent rebuilding and re-surfacing of houses and walls. I believe this intense creative activity speaks to the cultivation of human identities at Çatalhöyük that parallels the community’s cultivation of plants and animals. These human identities likely played important roles in maintaining social order and fueling cultural innovation. In some of his early writing, Ian Hodder referred to this dynamic as the “domestication of society.” He very reasonably argued that in early aggregated settlements humans required taming as well as “the wild” (i.e., cultivatable plants and animals).

In such a dynamic and volatile context of high density living, formalizing identities of at least three different kinds would be helpful.  One would be self-identity.  Highly polished obsidian mirrors is the obvious class of artifacts that reflects this concern at Çatalhöyük: 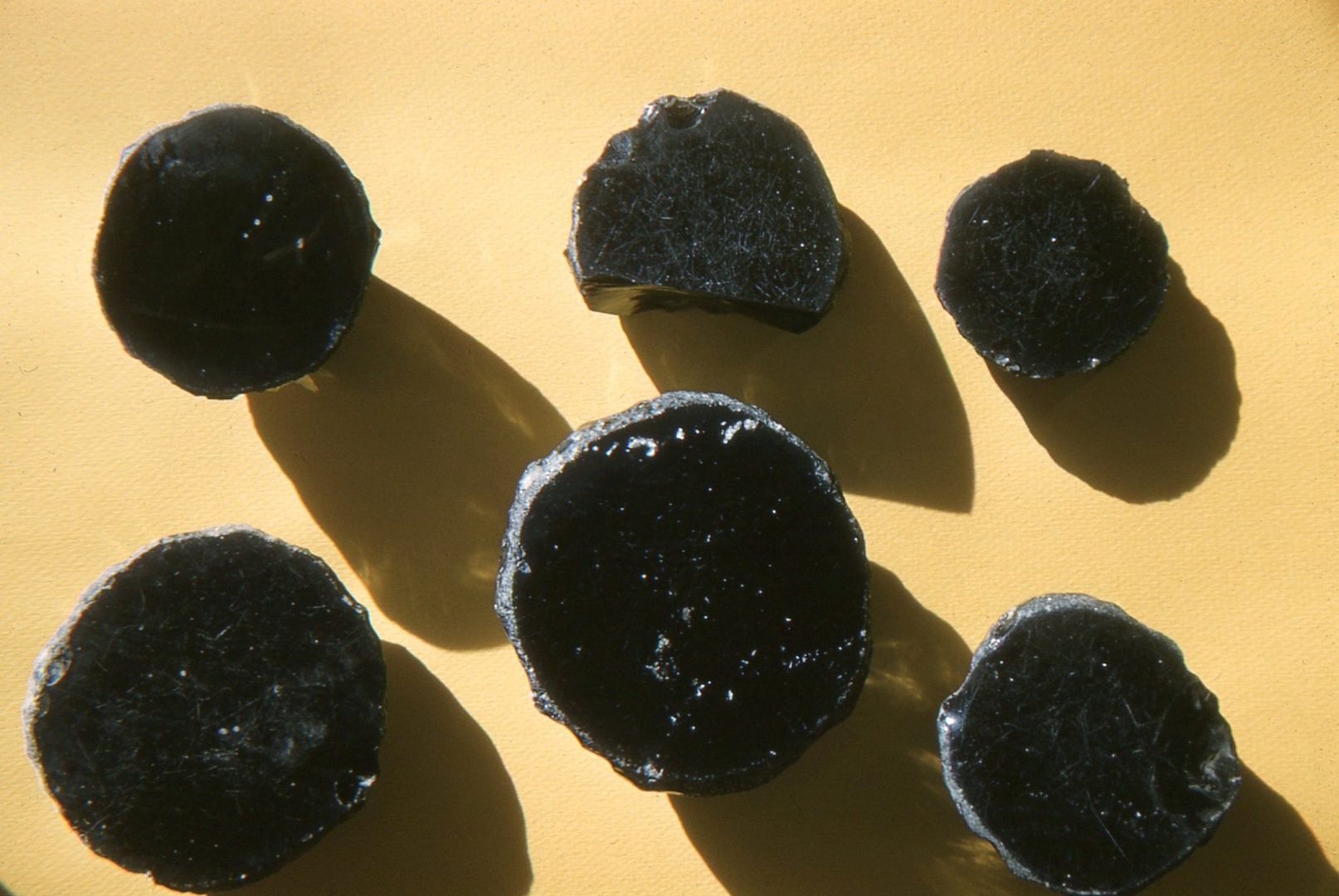 The second would be social identity. Beads are the earliest form of body ornamentation in human history, useful for communicating group affiliation, status, and other social meanings. Bead production is well-documented at Çatalhöyük: 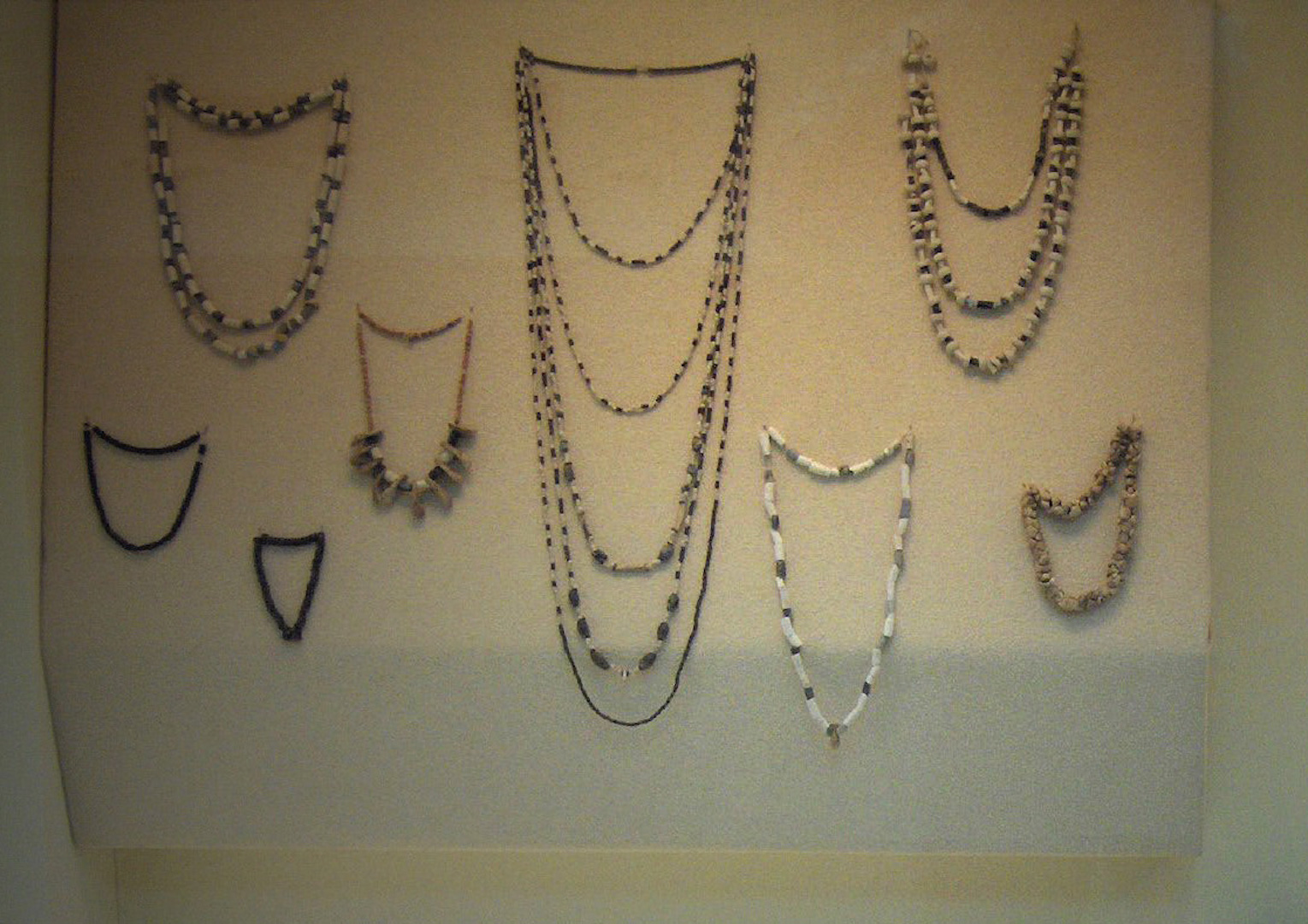 Strings of Beads from Çatalhöyük at the Museum of Anatolian Civilizations. (Wikimedia Commons, Georges Jansoone)

The third would be civic identity. Among Çatalhöyük’s famous wall imagery is a scene that has often been identified as the first landscape painting, cityscape, or map in human history. It shows a representation of the city in its lower register with an erupting volcano in the upper register representing the nearby mountain of Hasan Dağı, a potential obsidian source for Çatalhöyük’s craftspeople. 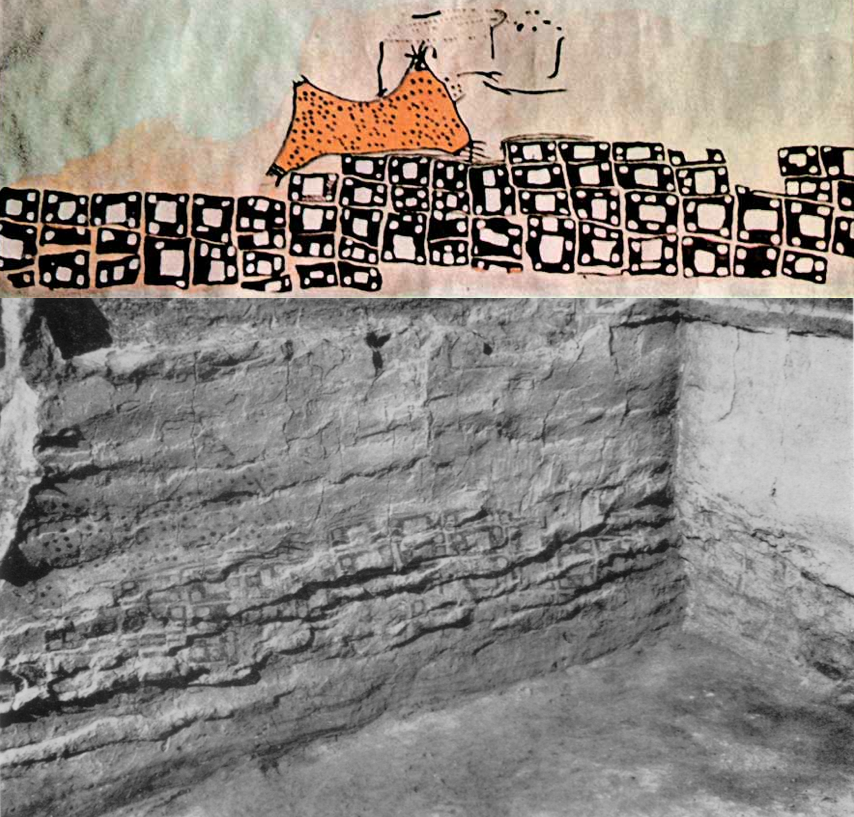 Wall Image from Çatalhöyük. Original in black and white; reconstruction in color (Museum of Anatolian Civilizations and James Mellaart)

I should note that each of these interpretations is debatable. Stephanie Meese makes a good case that the upper register represents not a volcano but a leopard skin, given that leopard imagery is pervasive in other wall paintings and sculptures at the site. Similarly, she sees the lower register as simply a basic panel of geometric design akin to those that are also found throughout the site. Both kinds of images were likely ritually important in activities that “domesticated” humans. I’m persuaded by Meese’s argument for the leopard skin, but less so by her argument about the geometric panel. If the lower register is intended to represent the community’s “urban plan,” then the composition as a whole could represent the first civic totem in human history and, by extension, an emerging sense of collective civic identity.

I believe that social and cultural changes were occurring at Çatalhöyük that hadn’t been seen before. What I’m calling a creative class preoccupation with identity-making was an outgrowth of the “energized crowding” that Spiro Kostof, in The City Shaped: Urban Patterns and Meanings Through History, sees as indispensable to the definition of a city. Çatalhöyük is nothing if not an exemplar of energized crowding. Thus, I don’t believe that Jacobs was entirely wrong about Cities First. I often tell my students that, in an empirically underdetermined field like archaeology, it’s sometimes better to be interesting than it is to be right. Jacobs’s Cities First idea qualifies. The idea has some virtues if we see urbanization as more process than product, and if we consider the concept’s demonstrated utility for spurring new thought about the history of cities. Peter Laurence suggests that there are “questions and theoretical paradoxes” in Jacobs’s writing that must be explored. There are also interpretive models about urban origins and evolution that might be worth re-working. Right or wrong, a century after her birth, Jane Jacobs’s work remains a gift from her to the rest of us, and it’s a gift that keeps on giving.